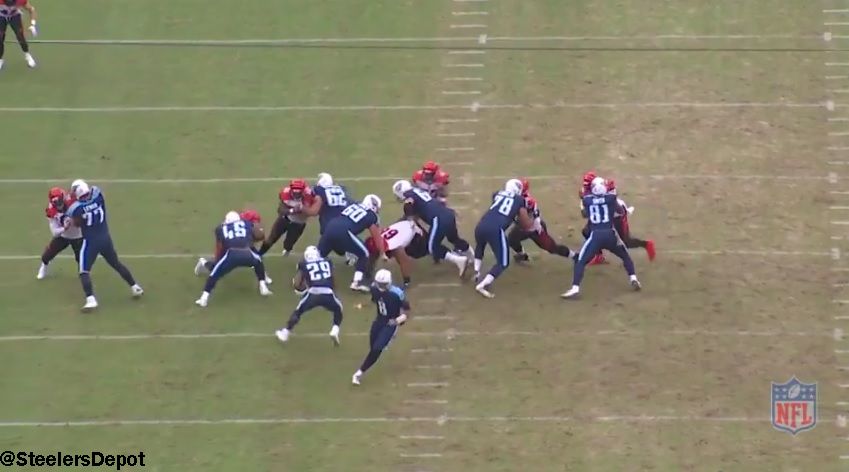 It’s pretty good. DeMarco Murray and Derrick Henry have shared the workload with most weeks, Murray being the lead guy. But there’s no hesitation to sub Henry in. Both are having a lot of success. Murray 4 yards a carry, Henry up to 4.4. Both practice good ball security, just one fumble between them (Murray) in over 200 carries.

Their run game identity is clear. Downhill style with two big backs. Murray is 220 pounds, Henry 247. And the Steelers have had problems with bigger backs this season (Jordan Howard, Leonard Fournette, Alex Collins). Some inside/split zone but they’ll go old-school. Lead strong with FB, #45 Jalston Fowler. Hat on a hat and wear down your defense.

But they’re creative too. That “exotic smashmouth” tagline that’s stuck with them. You’ll get read option with Marcus Mariota, the playside OLB left unblocked and read. Pistol/diamond formations that can offer a lot of misdirection. And they’re getting into the trend of using defensive players on offense. Cornerback Adoree’ Jackson has four carries this year, two of them going for 20 yards. One was a counter up the middle, the other a sweep to the left.

He aligns in 20 personnel with another back. Here’s one example.

Big threat in the open field. Can’t forget about the ultra-rare tight end end around to Delanie Walker. They’ve done it twice this year, once for a TD. You can check that one out here.

And on a short week, it’s hard to properly plan for all those packages.

Lewan-Spain-Ben Jones-Kline-Conklin. Physical, throwback group of guys that only makes their ground game all the more effective.

Led by Marcus Mariota, one of the league’s most efficient quarterbacks. Only sacked 12 times this year, too. Walker is one of their biggest targets too with 43 on the season. But don’t forget about Rishard Matthews, quietly having an excellent season. Averaging 14.9 yards per catch. There’s more familiar names too. Eric Decker and rookie Corey Davis, who has returned from an early-season hamstring injury.

Still, not a super explosive offense. Around 25th in passes of 20 and 40+ yards with a decent red zone offense percentage of 57%. They are 13th in the NFL in scoring at just under 23 PPG.

Don’t have a ton on their passing game. They certainly like playaction. Get it a lot on 1st down, especially the first play of a drive. And they’ll go max protect with two verts and try to hit something deep. 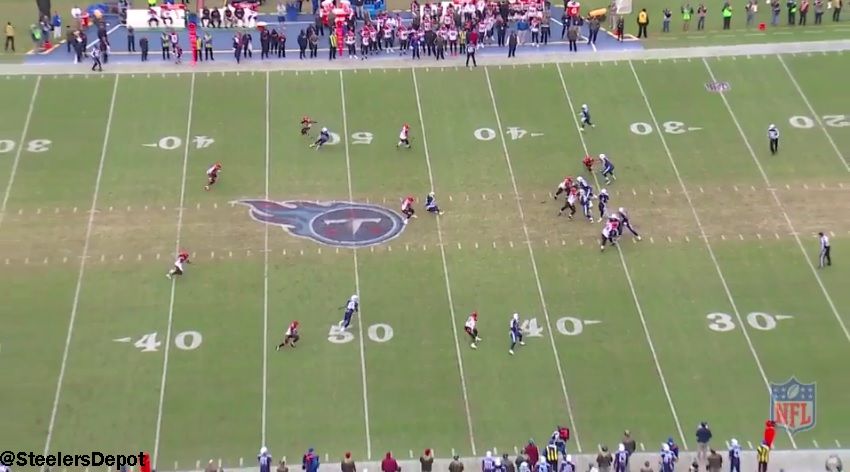 And when corners press, the Titans respond by trying to throw backshoulder. I’d give a little more cushion because good luck defending those throws.

Following a win on Sunday in Indianapolis over the Colts, the Pittsburgh Steelers now turn their attention to the surging Tennessee Titans, this time on a short week with a primetime Thursday Night Football showdown on tap.

Once again, the Steelers get a crack at a middle-of –the-pack offense in the Titans’ unit, at least statistically.

This Titans offense has stuck to the exotic smash-mouth style that head coach Mike Mularkey brought in a few years ago, relying on physical running backs DeMarco Murray and Derrick Henry to offset the load on third-year quarterback Marcus Mariota, who has shown flashes as a passer, but has struggled to stay healthy consistently in the NFL.

Murray usually starts the game for the Titans, but week after week it’s apparent that Henry is the team’s best runner, regardless of who gets into the end zone each week like Murray did three times last week.

Both run exceptionally hard, but Henry seems to have more speed to his game once he’s in the open field.

By relying on the run game, the Titans control the clock and keep their defense well rested while wearing down opposing defenses consistently. It’s an old-school philosophy with an option-based twist, which utilizes Mariota’s skills to the best of his abilities.

As a passer, Mariota is still growing and seems hesitant to take deep shots down the field, but when throwing over the middle or to the sideline in the intermediate areas Mariota has a quick release and is decisive with his throws. He has a lot of confidence in his ability to squeeze the ball into tight windows. For the most part, it’s worked.

When throwing the ball, Mariota often relies on tight end Delanie Walker and receiver Rishard Matthews in the middle of the field.

Walker has been a consistent threat since joining the Titans in 2013, never finishing a season with less than 60 catches. This year, through 9 games, Walker has 43 catches and 458 yards, but has yet to find the end zone.

Mariota seems to rely heavily on Walker off of RPO’s down the seam, which the duo connected on last week against the Cincinnati Bengals. With Matthews, Mariota looks for him down the middle of the field or on the boundary. He seems to be Mariota’s security blanket even though Matthews has struggled with drops the last few weeks.

Thanks to the run-heavy scheme, play-action passes are money for the Titans. They set up the pass so well by running effectively, which led directly to a touchdown in Week 9 against the Baltimore Ravens in Nashville.

Although this isn’t the greatest play-action fake from Mariota to Henry in the red zone, it’s enough to cause Ravens safety Eric Weddle to suck down into the box on the fake, allowing Matthews to run freely into the middle of the field for the easy score in front of Ravens corner Brandon Carr.

Along with Matthews at receiver, Eric Decker might not be putting up the big numbers he did as a member of the New York Jets, but he’s a good possession receiver for the Titans and often comes up with big plays near the sticks or in the red zone, while rookie Corey Davis appears on the verge of really breaking out this season. He’s a great deep threat, but he’s also establishing himself as a possession-capable receiver in this Titans system.

Fellow rookie Taywan Taylor is the clear deep threat in this system. He’s a home run hitter whether on the deep ball or on short passes, where he’s capable of making a few defenders miss for a house call.

Another rookie, tight end Jonu Smith, has shown flashes as a move tight end opposite Walker, but for now it appears that veteran Phillip Supernaw gets most of the run-blocking reps ahead of Smith.

The strength of this offense aside from the running backs duo is the offensive line, which could make a case for being the top unit in the NFL, let alone the AFC.

The bookend tackle duo of Lewan and Conklin is the best in the league. Both are maulers in the run game with serious mean streaks, but both have been very strong as pass protectors.

This is a cohesive unit that once it gets rolling on the ground, look out.

On special teams, Ryan Succop has struggled the last two weeks with a missed field goal against the Bengals and a missed extra point against the Ravens, but for the most part this season Succop has been exceptionally solid. On the year, Succop has missed just three field goals on the year, with two coming from beyond 50 yards. He’s money from 50 and in.

Punter Brett Kern is the best punter in football, bar none. On 44 kicks this season, he’s averaging a ridiculous 52.2 yards per punt, dropping 16 inside the 20 this season.

Kern simply flips the field every time he punts the ball away, setting up the Titans’ defense in a good spot to start drives.

Rookie cornerback and returner Adoree’ Jackson is a game-breaker any time he gets his hands on the ball. On punt returns Jackson is averaging a shade under 10 yards per return, recording a long of 46 yards on the season. Directional kicking on punts is of the essence Thursday night.

Kick returns are a similar story for Jackson, who has a long of 48 yards on the season. He’s elusive with the ball in his hands, forcing a number of missed tackles each time.

Tennessee actually uses him similar to a young Deion Sanders, getting him touches offensively as a runner, while allowing him to lock up with receivers on an island defensively at times.