Breaking down the Tennessee Titans’ defense.

The run defense, as a classic Dick LeBeau defense generally accomplishes, is really strong. Allowing just 3.6 YPC, 4th in the NFL, and the four rushing TDs they’ve allowed is tied second best. It’s led up front by Jurrell Casey, one of the best (and most underrated) defensive linemen in the league. He’ll be their left DE in base and play in sub-package football. Sylvester Williams is the true nose tackle with Karl Klug at RDE. DaQuan Jones also sees a lot of playing time at defensive end.

At OLB sits Derrick Morgan and Brian Orakpo. Orakpo has had a nose for the ball, forcing three fumbles, including one in last week’s win over the Cincinnati Bengals. Morgan is the LOLB, Orakpo the ROLB. Inside linebackers include Buck linebacker Wesley Woodyard and Mack linebacker Avery Williamson. They will switch to the strength of the formation from any motion.

The Titans have just 14 sacks, an unusually low number and tied for 28th in the NFL. 10.5 from linebackers and 3.5 from defensive line. None by the secondary which again is pretty curious. Morgan leads them with five.

They’ve allowed 17 runs of 10+ yards, third best, and just a lone run that gained at least 20. So safeties doing a great job of keeping a lid on things. Dave Bryan mentioned how good of a tackling team the Titans are. That comment is spot on.

Couple other stats. Allowing a lot more points than some of their other numbers would indicate. 23.7, 22nd in the NFL. That has a lot to do with their awful red zone defense, 60% (tied 26th) though their 33.3% third down defense is top 5th in the league.

It’s a really talented group. Logan Ryan at RCB, rookie Adoree’ Jackson opposite. Ryan kicks to the slot in nickel and LeShaun Sims slides in at the outside spot. Kevin Byard, one of my favorite players in the league at FS and Jonathan Cyprien at SS.

Statistically, their pass defense is strong. Quarterbacks are averaging just 6.5 yards per attempt, another top five numbers. 11th in completion percentage (60.6%), though teams have decided to go to through the air to find the end zone, maybe a product of how tough it’s been to run on them. 17 touchdown passes given up is bottom third in the league.

But Tennessee doesn’t allow anything over their head, the same philosophy LeBeau instilled in Pittsburgh. They lead the league with just 19 completions of 20+ yards and tied second in anything 40+, with just two of them allowed. That’s not good news for a Steelers’ offense that can’t complete anything vertically.

Like Mike Tomlin said in his press conference, LeBeau played a lot of man-to-man last week against the Cincinnati Bengals. Especially on 3rd down, like here, where they played Cover 1 Robber (man-free with the other safety looking to “rob” any crossing routes).

I didn’t get to do the deep-dive that I normally like to do but LeBeau’s defene has felt a little more conservative than I expected. That’s not to say there isn’t chaos, there is, but the secondary didn’t seem as involved. That isn’t to say they never are, an example below is the SS coming (Dan has photos of the same in his report) and the DL/LBs do plenty of stunting, too.

Daquon Jones is the true defensive end of the group and the youngest, in his fourth season. Sylvester Williams is the nose. And the other end/defensive tackle is Jurrell Casey. They’ll rotate in some guys along the line as well, primarily Karl Klug.

Williams comes to the Titans from the Denver Broncos, where he was another great run-stuffing piece to that defensive front seven. He’s a big guy, coming in at 6’2” 313 pounds, and is very good at holding his ground, hard to gain a push on this guy.

Casey is a veteran tackle who may even be coming off of his most productive seasons yet. He made the pro bowl in both 2015 and 2016, and hasn’t been held to under five sacks in a season since 2012. He has three so far this season.

It’s been an up and down year for Jones, who has all of the tools at the position, but has been inconsistent from week to week. He’ll see plenty of work against David DeCastro.

Starting with the inside backers we have Wesley Woodyard and Avery Williamson. Williamson won’t miss tackles, and can plug up those inside gaps very well. He led the team in tackles last season. Woodyard is another veteran on the Titans defense, coming to them from the Denver Broncos. Another downhill guy, who takes on those inside gaps, but this corps can be burned on the outside zone runs, something the Steelers can do quite well. These linebackers will be tested as they face an athletic offensive line.

In terms of their outside linebackers, well they’ve struggled with their pass rush this season, reflected by the team’s overall 14 sacks, good for second to last in the league. But the one consistent force in that category for the Titans has been LOLB Derrick Morgan. Morgan leads the team with five sacks so far this season, and they’re not all lumped into one or two great performances. His presence in the backfield has been noticed all throughout the season.

On the other side of the line is veteran Brian Orakpo. After an injury shortened his final season with Washington in 2014, Orakpo has been a valuable addition to the Titans linebacker corps. He’s posted 17.5 sacks in his first two seasons with the team, earning pro bowl honors last year. I’ve mentioned a few players throughout these scouting reports this season that are prolific at knocking down passes near the line of scrimmage, and Orakpo may be one of the best at it. It’s an underrated skill, but is a good indicator of his awareness, agility and his high motor. He knocked down 9 combined passes in 2015 and 2016.

They’ll use some rotation here as well. Spoiler alert: every unit will have some consistent rotation. Kevin Dodd will come in for some pass-rushing situations.

This group appears to be back at full strength. They’ve had some key pieces missing throughout the season, but look to be back together as a unit this Thursday night.

Ryan Logan and Adoree’ Jackson are the perimeter corners, but we will see them line up in various positions. Logan can be used in the nickel slot, bringing in Brice McCain to work the outside. Other times McCain will be the nickel.

Jonathan Cyprien is the strong safety. His impact has been noticeable since returning to the lineup. Cyprien missed weeks 2-7 with injury. We know Dick Lebeau likes to use his safeties in the box, and you’ll Cyprien there often. 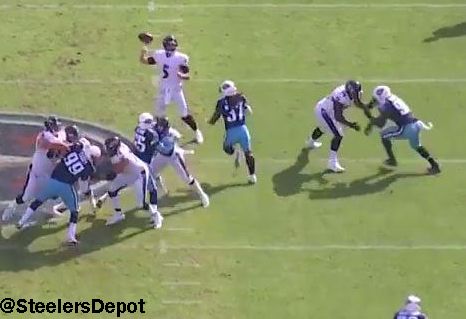 On this play his job is to fire through the “B” gap, and with the guard pulling, the running back has to pick up the linebacker Jayon Brown, giving a clean lane to the quarterback. Cyprien forces an errant throw and a fourth down. In certain packages, Cyprien will move to free safety. There’s hardly any consistency with their nickel and sub groupings. It will be more difficult to spotlight these guys in the secondary. They’ll throw in Da’Norris Searcy in sub-packages in the strong safety position or the nickel as well.

Kevin Byard is the free safety. Byard has been a big impact for the team this year in terms of splash plays. He has six interceptions this season, including five over the span of two games. This guy is hard to find out of position, and that gives him those opportunities for turnovers every game.