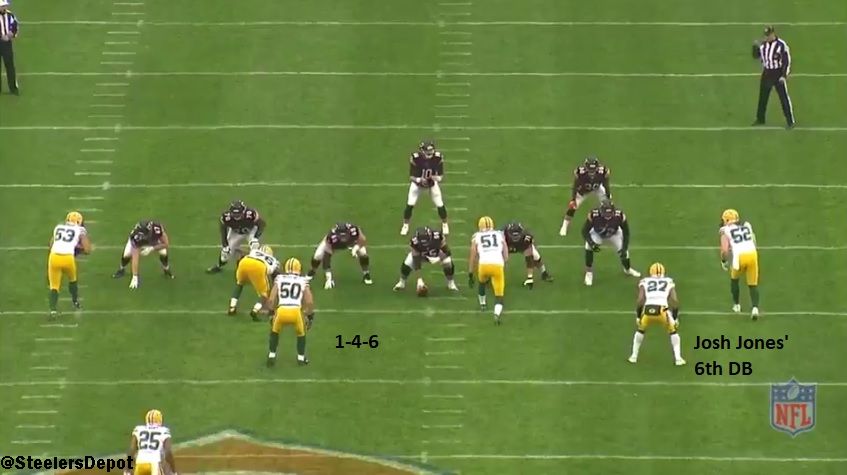 A defense that’s gotten healthier in the secondary but lost a key piece up front. Nose tackle Kenny Clark is missing the game after getting hurt last week versus the Baltimore Ravens, a big hit to their run defense. It was a unit allowing 3.7 YPC, which was tied 5th in the league. They had allowed just 27 runs of 10 or more yards, middle of the pack, but had let some explosive plays happen, ten of 20+ (tied for third most). So some popcorn happening and without Clark, they’ll be worse off.

Replacing Clark will be Quinton Dial.

Elsewhere on the line, Mike Daniels and Dean Lowry are the guys in charge. Dan will cover it more in his section but I just gotta say, Daniels is a beast. Totally dominant player. Ramon Foster and David DeCastro are going to need to bring their A games.

At outside linebacker sits Clay Matthews (though he’s dealing with an injury, Ahmad Brooks will replace him if he can’t go) and Nick Perry. Perry has seven of the Packers’ 21 sacks (which ranks 20th in the NFL) and has really come on the last two seasons. Blake Martinez is their guy on the inside with 84 total tackles. The next closest Packer has 51. Opposite him is Jake Ryan. #51 Kyle Fackrell has also seen the field at ROLB.

Their third down defense is bad and red zone D even worse. 19th on third down and 65% in the red zone, 29th. They also have the worst red zone defense while on the road, allowing teams to find the end zone a whopping 80% of the time (though that mostly happened in two games early in the year).

There’s some good news if you’re a Packers’ fan. After missing most of this month, safety Morgan Burnett should return. Ditto CB Kevin King. So at safety, you should have a strong duo in Ha Ha Clinton-Dix and Burnett. King and Davon House (who the Steelers showed interest in) at corner with Damarious Randall in the slot.

Pass defense has been below average though injuries haven’t helped. 7.7 YPA (tied 25th worst), 68.1% completion percentage against (31st) and they’ve allowed 34 passes of 20+ yards. That’s top ten most in the NFL. Given up five of 40+, more middle of the pack.

Seven interceptions on the year. Four by corners, three by safeties (Randall has three).

Also true to what Capers likes to do, you get a lot of sub-packages and amoeba defenses. Run a 1-4-6 dime in third and long. Yup, just one defensive linemen on the field, usually Daniels. Rookie Josh Jones, who I really think would’ve been a Steeler had the Packers not nabbed him one pick ahead, slides in as that dime/box defender. He’s tough, physical, and I’m a big fan of his game.

And they’ll run a variety of pressures. Sugar every gap pre-snap. Sometimes they drop, sometimes they both come, sometimes it’s based off how the line slides. Maybe not as exotic as I expected in their blitz schemes but there’s still a lot going on. Similar to the Cincinnati Bengals, they like to hold/disguise their coverages for as long as possible too.

Coverage wise, you get an even spread of everything. Would say Cover 1 Robber and Cover 2 are their most dominant coverages. Cover 2 on 3rd and long, Robber on shorter distances.

If they don’t get into dime, or even if they do, you have the potential to get the #2 receiver on a linebacker down the seam. I like that matchup. Assuming JuJu Smith-Schuster is out this week, look for Eli Rogers to make some noise over the middle. Vertical vs Cover 2, over routes vs Cover 3. Both can be effective.

Watch the linebacker around the 38 yard line carry the seam. Something the Steelers can exploit.

As is usual with base 3-4 teams, it’s a 300lb club along this defensive line. Big guys that can really get a push. LDE Dean Lowry (actually listed at 296lbs, but I’ll round up) is in his second season, and is often used to plug the gaps as this team looks for their outside backers to be the playmakers. Lowry can stuff the running backs up the middle, though. He’ll likely be matched up with David DeCastro quite often in this one. Kenny Clark is the nose, though he’s listed as “doubtful” paving the way for Quinton Dial to start in relief.

Mike Daniels is your other defensive tackle/end. He’s the veteran of this unit, and likely the most dangerous as well. Daniels displays a great combination of power and speed. He’s quick off of blocks and very physical in the inside gaps. He does not take plays off, as you’ll see in the play below. 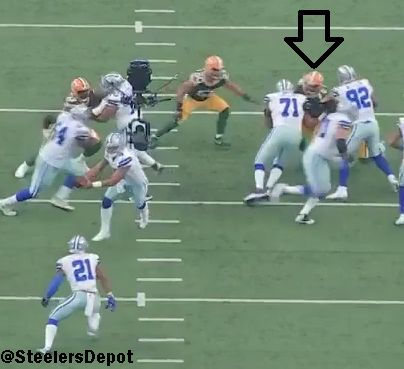 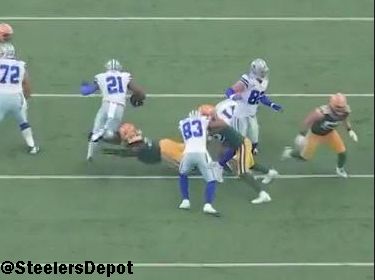 Here Daniels is blown up off the snap, caught now in between the right tackle and tight end. Daniels lowers his shoulders and squeezes through the gap, while still fending off the right tackle mind you, and trips up Ezekiel Elliot saving what would have been a sizable run. If you want to shut down Daniels, you’ll have to block to the whistle every single play.

This group has had their share of injuries this season, and it’s reflected in their overall play up to this point. The defense ranks at about the middle of the league in most categories;  their play has been lackluster at times. But the skills are there.

The inside linebackers are Jake Ryan and Blake Martinez. Martinez is developing well in his second season with the pack. He’s a versatile guy, who can play well in space, run down passes in the flats, and is solid in coverage. Ryan is very similar as well. Young guy, with good speed, but he’s more valuable in the run game than Martinez.

That being said, the Packers can get gashed on the ground. They’ve given up ten plays of 20+ yards this season, tied for second most in the league. But to their credit they also haven’t allowed a run of 40+ yards, so take that for what it’s worth.

As far as the outside linebackers go, Clay Matthews is your weak side backer, Nick Perry has the strong side. You’ll see a dose of Ahmad Brooks in pass rushing situations as well, especially if Matthews can’t go (listed as questionable with groin injury). Perry gets after it and is really coming along as a highly productive pass rusher. Last season he had a career-high eleven sacks, and has since followed that up with seven more through week 11 of this NFL season.

And we all know how impactful Clay Matthews has been throughout his career. While he may not be making the big splash plays every single game he is still very much a force to be reckoned with. These linebackers coming off the edge is the biggest threat opposing lines will be facing. Take this play below: Matthews has great burst off the snap, and doesn’t even need to do anything fancy, he just simply beats the tackle to the quarterback. And with pressure coming from Brooks off the other end, there’s no chance to even get a throw off.

There are some injuries in this group as well. Morgan Burnett is listed as “questionable” for Sunday’s game. Josh Jones will take his place if he’s a no go.  Burnett would be a valuable addition to this secondary. He’s great in the run game and his athleticism allows for big splash plays.

Starting corners are Damarious Randall and Davon House. They’ve been missing Kevin King in the defensive backfield recently. They make get him back this Sunday night, but it’s unlikely given his shoulder injury. Expect to see Randall and House out there. Randall is very versatile and is great man-up given his speed. House is much more involved in the run game and will be sent on corner blitzes as well. Physical corner that will get his hands on you.

They will move some guys around from time to time. Josh Hawkins will enter in nickel formations, but in those cases Randall will move to the slot with Hawkins lining up out wide. From what I’ve seen it looks like they use nickel roughly fifty percent of the time, so expect to see Randall in both the slot and outside all throughout the game.