Another year and another season in which the Pittsburgh Steelers have relied heavily on the legs of running back Le’Veon Bell. For only the second time in his career, Bell has been available for every game during the Steelers’ first half of their schedule. Bell’s presence has led to the Steelers using their running back at a historic rate. 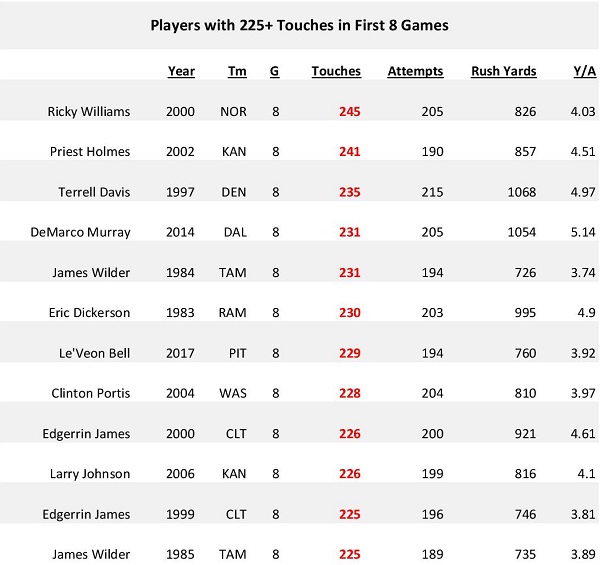 Bell joins DeMarco Murray as the only running back to exceed 225 touches since 2006 when Larry Johnson did so. While all the running backs listed were certainly skilled at their trade, anytime you exceed over 225 touches, the question of durability is raised. In Bell’s case, this is the 12-million-dollar question that has followed him since the end of last season. But now with another 229 touches in just a half season’s worth of work, is there a cause for concern of Bell declining down the stretch? 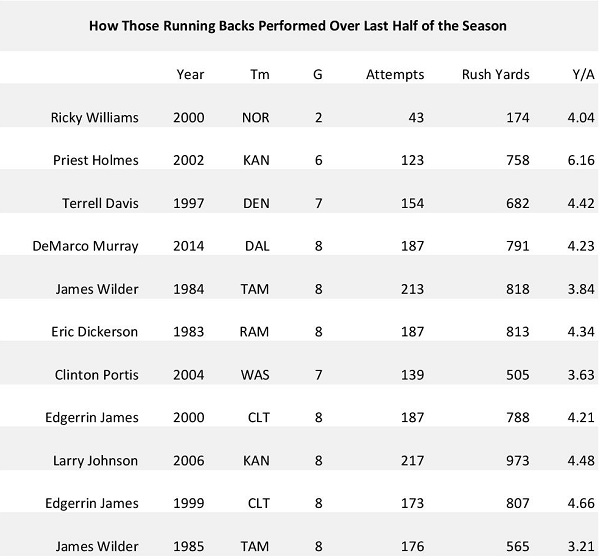 Using the other 11 occasions in which a running back has exceeded 225 touches in just eight games, perhaps history can give us an educated guess on what the Steelers can expect from Bell down the stretch.

Above are how those 11 other occasions played out over the season’s last half and there are more than a few conclusions that can be drawn from the data.

Health is perhaps the most important factor when it comes to a high workload for a running back and the data speaks favorably about Bell’s chances of staying healthy down the stretch. Seven of the 11 running backs managed to play the entire second half of their season with Ricky Williams (2002) being the only back to miss more than two contests. In total, the running backs listed played 78 out of a possible 88 games over the final stretch.

With health on his side, the next and perhaps most important factor as it relates to the Steelers’ success is Bell’s production. With 7674 total rushing yards in the 78 combined games, the selected running backs averaged just under 100 yards rushing per game (98.4) in the final half. This would be about ten yards fewer than the combined first half average of 107.4 rushing yards per game that Bell and company have produced.

On a per carry basis, five running backs managed to improve their yards per attempt figure over the last half of the season. And while this number may not seem favorable, there are good odds that Bell can be the sixth running back to improve in the second half. Bell has only gotten better down the stretch over his career, averaging over 100 yards rushing per game and over 4.5 yards per carry in December, his highest monthly figure.

While on paper, it seems that despite his almost record-breaking workload, Bell has both health and production on his side, the past is never a guarantee for what may lay ahead. But should Bell suit up and perform to the expected standards over the season’s final half, the running back will have once again silenced any questions over his workload.