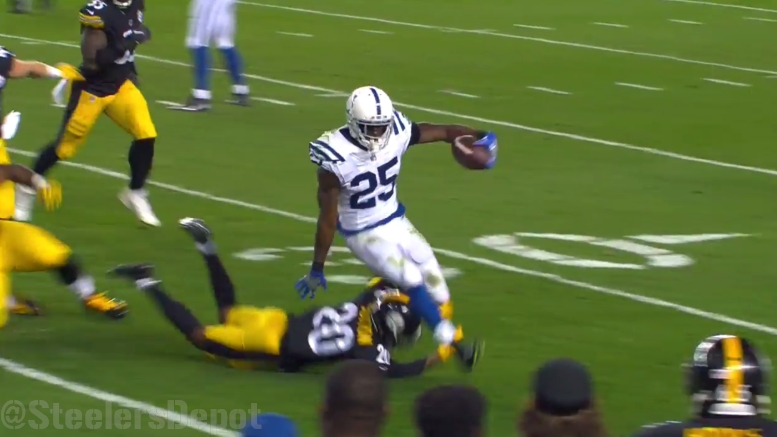 Well, on the plus side, at least the personnel side of the equation for the return of rookie cornerback Cameron Sutton suddenly very easy, right? With the four-game suspension of starting right tackle Marcus Gilbert, a roster spot will immediately be opened for the pending activation of the Pittsburgh Steelers’ third-round draft pick, which will happen today, or not at all.

Today is the end of the three-week window that opened for him to be able to return to practice, at the end of which a decision has to be made regarding whether to activate him, leave him on injured reserve, or release him, but any decision other than activation at this point seems very unlikely.

But, barring injury, so does playing time on the defensive side of the ball seem unlikely. While he has been practicing for three weeks, it would not make much sense to throw him out there right now unless it becomes necessary.

Even with Joe Haden at left outside cornerback expected to miss at least another couple of games, there is still no clear opening for playing time, as they merely shifted Coty Sensabaugh, who has not been playing on defense at all, into the starting lineup.

That did nothing to alter any of the other roles. Artie Burns is still in his starting right outside linebacker spot, while Mike Hilton has locked down the nickel role since the first game of the season, and veteran William Gay has handled the dime role.

But my guess is that he would be the first one off the bench should anybody get injured. The only other healthy cornerback on the roster currently is fellow rookie Brian Allen, and while he has been healthy throughout the season, he is much more raw.

It may well be that Sutton would be a game-day inactive, while Allen would dress to play on special teams, though even that is not guaranteed. But I think that if they went into a game with an injury, it would be Sutton who would be asked to actually play.

And none of this actually precludes the Steelers from using him in any role if they wanted to. They have seen him all season, including in the classroom, and they have watched him practice for the past few weeks. They see where he is from both a physical and mental standpoint, and frankly he has played as many defensive snaps as Allen has.

Or that Sensabaugh had played prior to last Sunday’s game after Haden went down. Sure, they have been getting some reps in practice all season, while Sutton has only gotten work for the past three weeks. But he has still been around.

And it’s not like he’s coming off any type of serious injury. He had a hamstring injury that was at least significant enough for them to be able to justify putting him on injured reserve, but if he were an important player at the time, they wouldn’t have done even that.