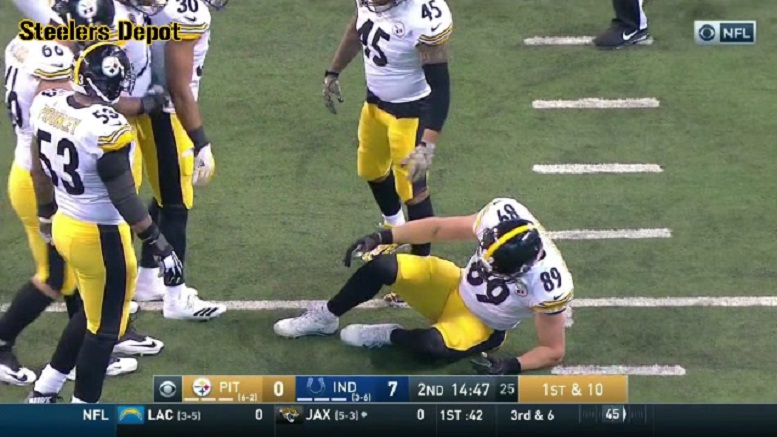 The Pittsburgh Steelers will play the Tennessee Titans Thursday night at Heinz Field and in addition to them likely being without the services of two injured defensive starters for that contest, they might not have one of their top-two tight ends due to an injury that he suffered Sunday against the Indianapolis Colts.

Vance McDonald in a walking boot this morning. Injured ankle vs Colts

According to Ray Fittipaldo of the Pittsburgh Post-Gazette, Steelers tight end Vance McDonald was still in a walking boot Tuesday morning and that means he isn’t likely to practice fully later in the day.

McDonald, who injured his ankle during a kickoff return Sunday in Indianapolis, was listed as a limited practice participant on the Steelers Monday speculative injury report. In short, that means he probably would have been limited had the team actually conducted a practice.

As you can see below, McDonald was injured Sunday during an early second quarter kickoff return thanks to him running back James Conner getting blocked into him. After McDonald ultimately left the field and was listed as questionable to return, he was able to get back on the field and even caught a touchdown pass in the fourth quarter.

McDonald has already missed two games this season with minor injuries with his latest being in Week 8 because of a knee injury.