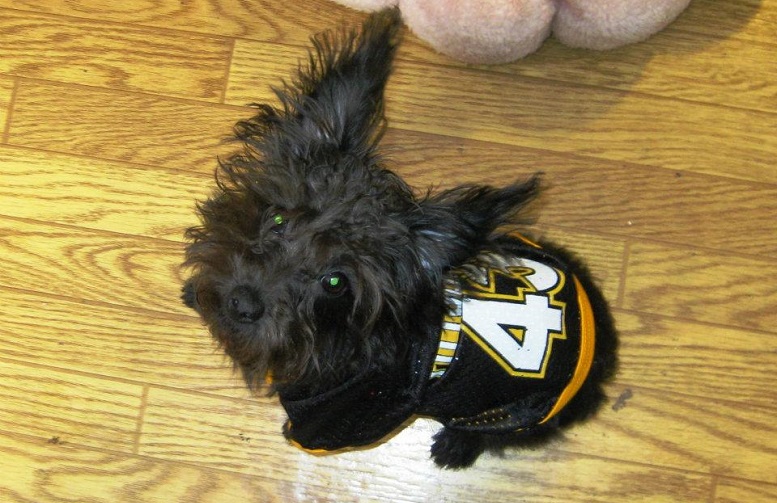 The photo is my pooch Fifi from 6 years ago when she was a pup. She is sad since there is no football game to watch this weekend.

It’s a bye week and the first half of the season continues to be analyzed. No matter how you slice & dice it; the only statistic that really matters is 6-2. That said, there are many areas that merit review. As coach Mike Tomlin said before the season began; this team will evolve as the season progresses. Questions abound. Can Ben Roethlisberger’s arm carry the offense, or has he gotten too old? Can Martavis Bryant be fitted into the offense? What happened to Eli Rogers? Why isn’t James Harrison playing? What is going on with the red zone offense? What is going on with the red zone defense? Why can’t the Steelers find a kick returner? Is Bud Dupree a bust? Can’t Mike Mitchell keep his mouth shut? (I hope not since he is one of the main defensive play callers). Is Le’Veon Bell getting too many touches? Why don’t we run Le’Veon Bell in the red zone? Why isn’t Le’Veon Bell spilt out wide more? How come Roosevelt Nix doesn’t get more playing time? Why isn’t Todd Haley fired already, he is the worst Steeler offensive coordinator ever? Mike Tomlin’s a terrible coach because (fill in the blank); shouldn’t he be on the hot seat if the Steelers don’t win the Super Bowl?  Is Antonio Brown too much of a distraction throwing Gatorade jugs around? Is Martavis too much of a distraction. Are Le’Veon’s rap songs too much of a distraction? Why aren’t they focused like earlier Pittsburgh Steelers teams?

Speaking of distractions. We all know how singularly focused the 1970’s Steelers were on winning – right? Here is a good article by the Steeler’s Bob Labriola on a season of distractions from back in the day. Would you trade those distractions for today’s?

With all the concerns raised by Steelers Nation; it is a wonder that the team should even attempt to finish the season. Maybe just tank it and start looking for Ben’s replacement in the 2018 draft – I see a surprising number of comments looking beyond the season at hand. 6-2 people. Not 0-8 ala Cleveland.

Halfway through the regular season and a bye week. Good timing? I hope so. The Pittsburgh Steelers are 6-2 with much of the NFL in turmoil with injuries. Sensational rookie quarterback Deshaun Watson lost to the Houston Texans with a knee injury during practice. What had been a daunting second half schedule looking easier with most of the games facing back-up quarterbacks.

Next up is the Indianapolis Colts with Jacoby Brisset who has 5 touchdown passes and four interceptions in his NFL career. Then a healthy Tennessee Titans team with the dangerous Marcus Mariota. The Green Bay Packers will be without Aaron Rodgers and riding with someone called Brett Hundley who has thrown one touchdown and 5 interceptions in his NFL career. Then the Steelers have rematches with division foes Cincinnati Bengals & Baltimore Ravens before facing Tom Brady and the New England Patriots. The season closes with a Christmas day game in Houston who may be quarterbacked by some guy named Tom Savage unless they bring someone new in & finally the Cleveland Browns. Sounds like an easy 6-2 or 7-1 record to close out the regular season – or does it?

We all know Tom freaking Brady has the Steelers number. He is 7-2 in regular season versus the Black & Gold and a spotless 3-0 in the playoffs. By the way, two of those playoff wins were at Heinz Field. The Steelers have never faced Marcus Mariota, but he appears to be the real deal with an adequate arm and the ability to scramble for positive yardage. You can always count on AFC North foes to play the Steelers tough even when they stink against the rest of the league. After all, the Steelers only beat the Browns and their rookie quarterback DeShone Kizer 21-18 to open the season and he has some NFL experience now. That leaves the luckless Colts and Texans as automatic check marks in the win column … ah that would be a no. Remember, the Steelers always play down to opponents they are heavily favored to beat. Bears or Jaguars anyone?

Now, I’m not saying that the Steelers will go 0-8. Just that none of these games are a given to me. I’m not looking ahead to the playoffs. Not even looking ahead to the Patriots game. I’m certainly not looking at the 2018 draft. Right now, it is time to get focused on the Colts. I’m sure that is what Mike Tomlin is getting the team ready for. The Black & Gold is one of the healthier teams in the league right now … knock on wood, knock twice, knock thrice. Stay that way, and the Colts should be put away and then we can focus on the next game.

Here are some of the things I am hoping to see over the second half of the season starting with the Colts: Ben’s improved connectivity with the receivers.  The original starting offensive linemen dominating. The tight end group stepping up. Vance McDonald catching balls in addition to blocking. Jesse James blocking in addition to catching balls. Xavier Grimble blocking and catching balls in addition to sitting. James Harrison being fed some snaps. Artie Burns attempting some tackles and quit getting burnt by peaking at quarterback too long. More Mike Hilton. Defense cuts missed tackles in half (last in NFL with 77 misses so far). AB start returning returnable punts. James Conner improvement picking up blitzes. Chris Boswell kicks at least twice as many PAT’s per game. Stephon Tuitt is back in full with the rest of defensive line. What did I miss?

OK, my Bye week rant is about done. I always keep some angst in reserve; as an average Steelers fan I am duty bound. I am hoping that Stephon Tuitt has a very strong second half. Never realized that he had a song about him by the B.T. Express that some of you may recall; Tuitt ‘til You’re Satisfied. Hope he keeps sacking them until we are all satisfied.