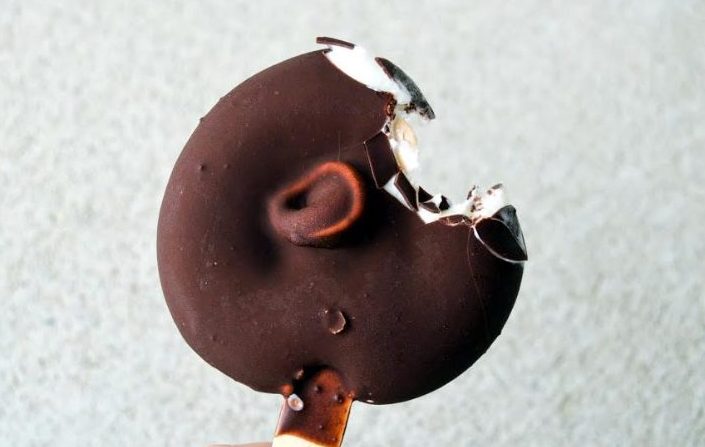 Made the drive from the DC suburbs Thursday afternoon. 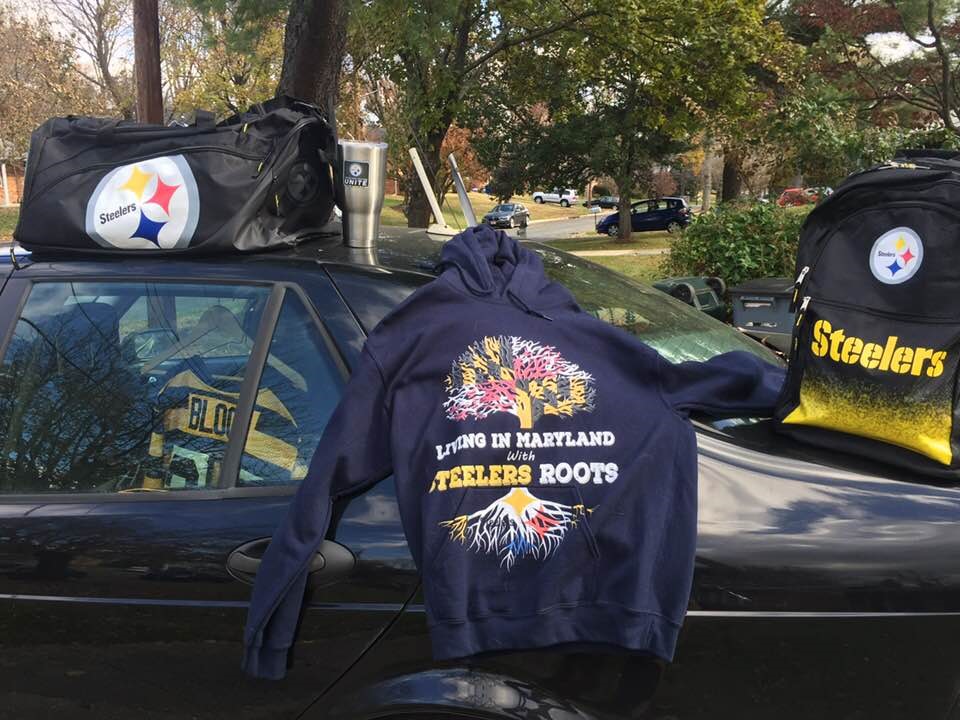 Picked up my brother in Beaver County and then headed for Heinz Field. His earliest memory of the Steelers goes to the 1963 season. He recalls that they just had to beat the New York Giants to play in the championship game. They had beat the Giants 31-0 earlier in the season but came up short in the last game of the season. 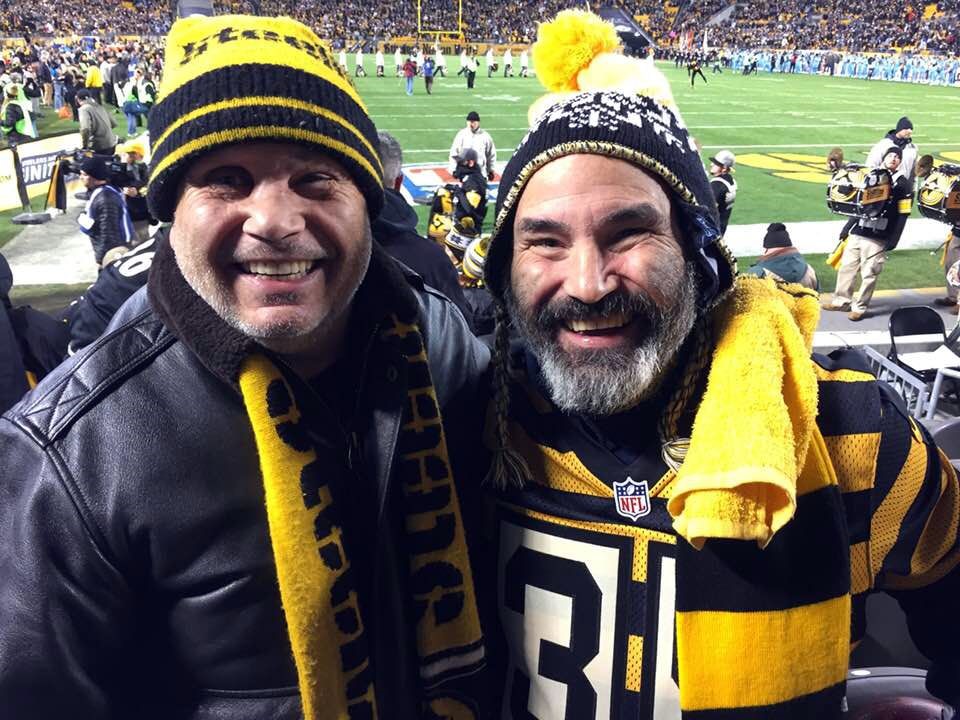 Attending games has a totally different ambience than watching the Steelers from home or a Steelers bar. Honestly, it is much easier to track the game and exchange views with citizens of Steelers Nation while away from the stadium. Constant input from the national announcers or the Steelers home crew of Bill Hilgrove, Tunch Ilkin & Craig Wolfley (which I much prefer).

At home, we can multitask and watch the game, listen to the announcers and be plugged into social media and voice our opinions & record observations on live discussion threads. We can see replays repeatedly to see if we agree with the commentators on whether that really was a push off by Martavis Bryant or were the referees jobbing the Black & Gold once again. We can see Antonio Brown’s toe tap on the sideline for a significant first down. You can simply catch more of the action on the tube than when you see the game live.

Going to a game is not for those that are analytical or want to dissect the game real-time to fully understand what has just transpired. Watching the game real time leaves little time to calculate what just occurred. These folks move fast, and it is more of a staccato blur of activity that you are trying to make sense of. Attending a Steelers game is a visceral experience. Our responses are emotional and not based on any rational thought.

Logic and reason is suspended for a few hours; the most accurate thermostat of our mood is the scoreboard. Read it at any given time and you can have an accurate gauge of the crowd’s mood.

Attending a game is also a tribal rite. We all know that we belong. Our Black & Gold colors distinguish us from others. Lest there is any doubt; a yellow towel further symbolizes our allegiance. There is something powerful driving into the city seeing more & more Black & Gold. I made a rendezvous at the Jerome Bettis Bar & Grill with some other members of the tribe.

Some of you heavy Steelers tweeters may know #nailthenumber17 (Craig) who had come in from New Jersey with his wife. He was there as was Dane, a Baltimore city policeman along with his son. Craig is a long-time season ticket holder who recently donated a set of his tickets so that a Steelers fan who had never attended a game could get a chance to make a dream come true. 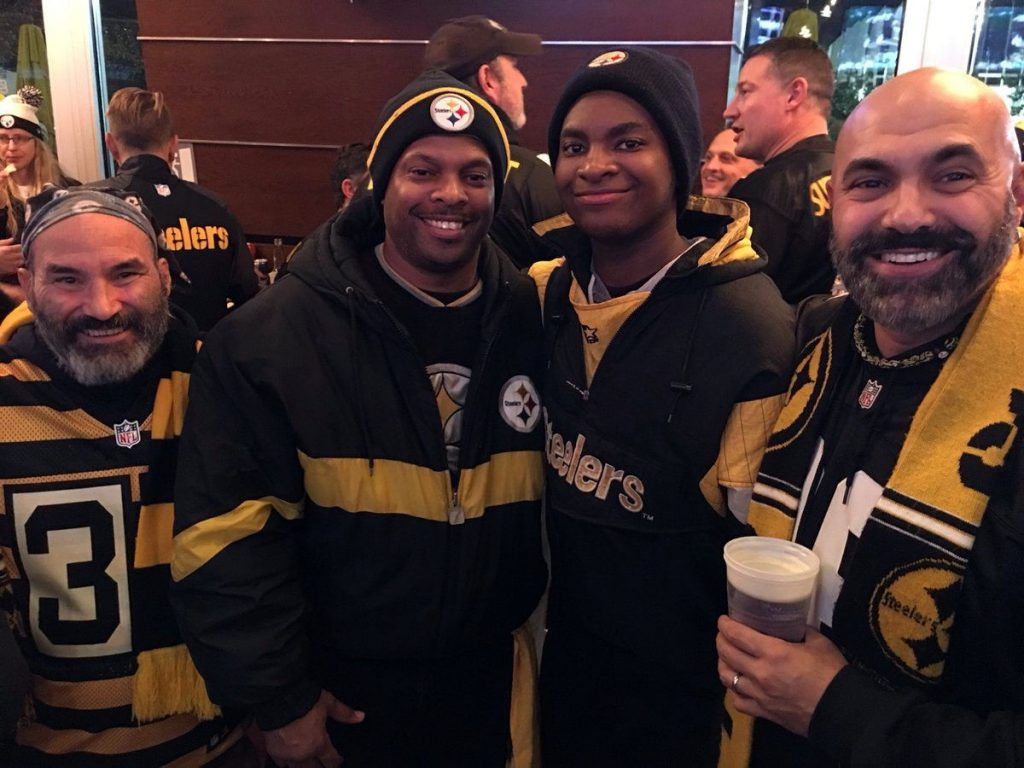 Earlier I met a father and his dentist son who had flown in from Nebraska. The elder a Steelers fan since 1975; his son following his footsteps. They had attended Steelers games all over the country, but this was there first time to a game at Heinz Field. We had only just met walking across the Fort Duquesne bridge from downtown to the North Shore. Yet, though we were complete strangers; we gave each other the benefit of the doubt. We were clad in Black & Gold after all. Not to say that any member of the tribe can do no wrong. There are taboos as in any tribe: Don’t be a jagoff or risk ostracism.

Inside the stadium, Steelers fans are ready for the game. The capacity of Heinz Field is 68,400. For this game, 60,703 people had their tickets scanned as they entered the stadium. Unlike other teams; the Steelers announce their crowd size by the number of people who attend not by the number of tickets sold. A few rival puffs of powder blue can be seen; but this is predominantly a Black & Gold crowd.

One thing that struck me as different during warm-ups was seeing Titans strung out throughout the field. I’m used to seeing teams segregate themselves using the 50-yard line during pregame warm-ups. Only a few Steelers are on the field; but once the rest of the team spews out of the tunnel the boys in powder blue quickly retreat to their assigned side of the field.

I am worried. My last time here was for the Jacksonville debacle. The Titans have beaten the Browns, Ravens & Bengals in succession. Would they add a Steelers’ pelt to their belt and become the liege of the North?

This is a Titans team that knows the Steelers better than most others. No less than seven coaches with ties to the Steelers including revered defensive coordinator Dick Lebeau. Head coach Mike Mularkey played tight end (1989-91) and coached the Steelers including being an offensive coordinator (1996-2003). Russ Grimm was an offensive line coach (2001-06) and a candidate to be head coach after Bill Cowher retired. Lou Spanos coached from 1995-2009. Defensive line coach Nick Eason played for the Steelers from 2007-10; his assistant Keith Willis wore the Black & Gold from 1982-91. DB coach Deshea Townsend played from 1998-2009. From 1982 through 2014, a span of 33 consecutive seasons, at least one of these guys either coached or played for the Steelers – they know the Steelers.

Most of you have a better handle on what happened during the game than me. I was just a screaming, towel waving mindless fanatic caught up in the moment for much of the time. My feelings a reflection of the mob of Steelers fan sharing the experience with me in the stadium. Euphoria resulting from the opening drive culminated by Antonio Brown’s first of three touchdown receptions. Ben Roethlisberger looking like the Ben of old; not old Ben. Anger at the referee for calling Martavis Bryant for a phantom push off which was replayed on the Heinz Field video screen; which elicited even more boos.

A play that sticks in my mind was JuJu Smith-Schuster catching the ball on 3rd and 11. The Steelers were in the red zone and it looked like the Steelers might have to settle for another field goal. That was a money catch that led to another AB touchdown. 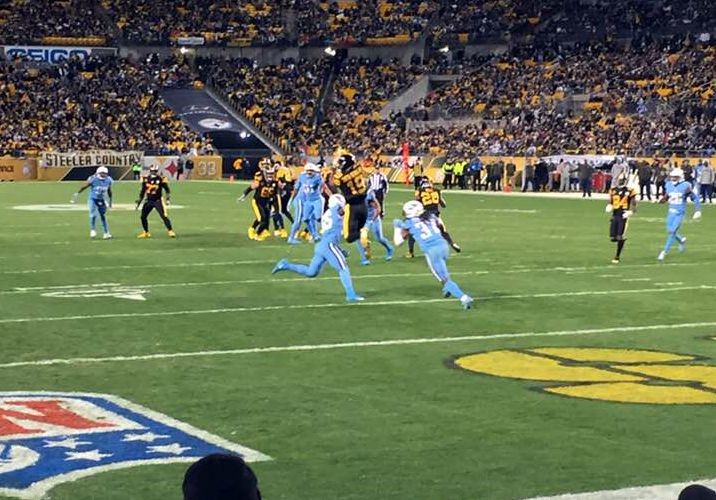 Two other catches by AB that were amazing – his toe tap at the sideline to keep a drive alive and his helmet catch for a touchdown was not replayed on the stadium video. In the case of the toe tap it was likely to withhold any evidence that might lead the Titans to challenge the play – nothing to see here move along. I’ll have to watch it again from my recording of the game.

As for the helmet catch, it happened in the opposite end zone from me. If they did replay it; I was simply too caught up in the moment to notice. The crowd was erupting as was I – jumping up and down, high fiving people around me and twirling that towel. Another play was Martavis recovering the AB fumble. Moments before fans booed as he missed a reception; the boos changed to cheers as Martavis saved the Steelers possession.

I loved seeing Darrius Heyward-Bey coming onto the field to hug Bryant as he trotted off.

I had heard that the overhead camera view would be used during the broadcast. I did not think it was going to be such a big deal since the Fox Network has used it for years. I guess it was the use of the overheard view as a primary view and not for replays. I still must watch the recorded broadcast to see if it makes a big difference. I was oblivious to the “dilly dilly” audible during the game. I started hearing references immediately following the game and thought at first, they were talking about the Dilly Bar (delicious) and not the commercial which I had never seen until now. As for end zone celebrations; you see them once but get very few replays inside the stadium. I really don’t think I missed out on any of this.

The cheering was louder when Le’Veon Bell had apparently scored a touchdown to end the 3rd quarter than when Jesse James did the deed to begin the 4th quarter. Instant replay takes minutes to analyze an instant in time. The review does INSTANTLY take the crowd out of the game. The crescendo of cheering turns quiet in a nanosecond which is quite jarring. I had my phone pointed up to the cross bar to record the 30th point scored for the first time this season only to groan ass the score is negated with the crowd quieted during the commercial break between periods. Pittsburgh does score on the next play, but it is anticlimactic for people who are there.

Just think; if there had been instant replay in 1972; there might be no such thing as the Immaculate Reception today. A tradeoff between precision for the television audience and the mystique for those witnessing live action. Watching the replays, it still looks very close to me.

Despite the one play drive for a score to start the 2nd half; the defense looked darn good. Half the starting secondary was out after all. The front 7 bottling up Marcus Mariota – well except for his touchdown scramble. But the pressure gave the secondary interception opportunities of which they took advantage.

Bell did not run the ball too much, but I almost think it was by design. We all know that a Dick Lebeau defense is designed to stop the run; so why not pass instead. It seemed to set it up so that Bell could close out the game with some nice runs to keep the clock going. Tick Tock. Anyone who attends a game knows another Steelers tribal ritual: Renegade. My phone probably did not capture the ambiance well; but at this point confidence was up that another defensive stop and this game is over. There was a brief scare when Cam Heyward went down but he walked off on his own power and returned later.

This was the Steelers most complete game from what I saw. Not without flaws; but ones that were overcome by interceptions by Mike Hilton, Coty Sensabaugh, Robert Golden and Sean Davis. Those were enabled by pressure from the front seven and sacks by Stephon Tuitt, Cameron Heyward, L.T. Walton and Vince Williams. Offense, defense and special teams too with Chris Boswell nailing four field goals including a 50 yarder; Jordan Berry averaging over 50 yards a punt and coverage unit limiting Adoree Jackson to one punt return of 10 yards and 5 kick returns averaging less than 21 yards.

So, was this win a big feat?

It was big in that it shows what the Steelers potential can be, the Steelers are now 8-2. Yet a pattern has not been established yet. Let’s see how the Steelers do against the Green Bay Packers. Two in a row could be the beginning of a nice trend. In the meantime, we can listen to some Little Feat, the Steelers were the Dixie Chicken that had it some Tennessee lamb.