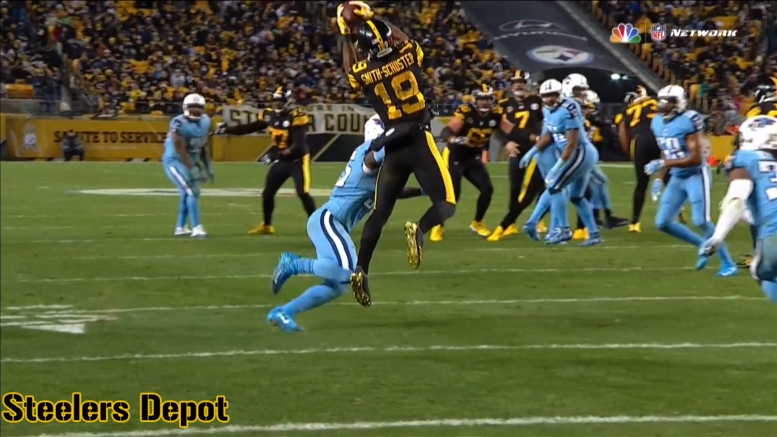 Leading up to the Pittsburgh Steelers’ game against the Tennessee Titans a week ago as of today, the offense was not making great use of the no-huddle set this season, by any means. By the game records, they only recorded 90 snaps out of the no huddle during the first nine games, which is of course exactly 10 plays per game.

They ran nearly triple their season average of no-huddle plays against the Titans, 28 in all, and many have sought to use this increased usage as a cause, or at least a justification, of the improved offensive play, or simply of Ben Roethlisberger’s improved play.

So was that the case, or was it not? Well, for starters, they certainly opened up the game coming out of the no huddle, as five plays on their opening possession—nearly the entire drive—were designated as having been run out of the no huddle. That includes the final play of the drive, which was a 41-yard touchdown pass to Antonio Brown off of a free play due to an impending defensive offside penalty.

Really, they made use out of it in at least some form or fashion on nearly all of their drives, though they did not do so on their second possession. Of course, they did not manage to do a great deal on offense throughout the remainder of the first half, which included another 12 plays out of the no huddle.

The offense only ran 11 plays out of the no huddle in the second half, when they did the majority of their scoring, however, and none of Roethlisberger’s second-half touchdowns were thrown out of it.

Not that it was not an effective package. Overall, the Steelers averaged 6.3 yards per play out of the no huddle against the Titans, while they barely averaged over four yards per play on their 45 additional snaps in the game, excluding kneeldowns.

That does, however, include penalties, including a 15-yard facemask penalty against Marcus Gilbert, as well as a false start on David DeCastro. Removing them does get you to nearly 4.8 yards per play, but that is still a clear disparity from the 6.3 yards out of the no huddle.

One does have to consider the fact that teams don’t run the ball out of the no huddle, as well. There were just three against the Titans, for 11 yards.

Overall, the no huddle was an effective tool against the Titans, but perhaps not the savior it has been portrayed as. Of course, even no-huddle drives are fluid and occasionally include huddling in select situations, so very little is to be taken in terms of absolutes out of this.