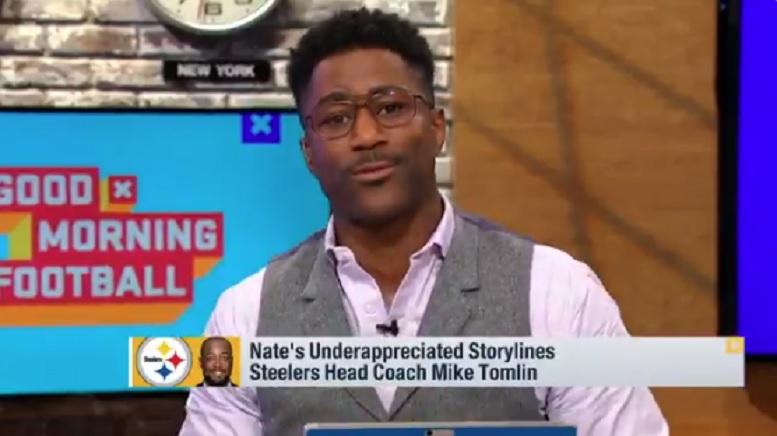 With the 2017 regular season starting to wind down, the talk about which NFL head coaches should be considered Coach of the Year candidates is starting to heat up. On Thursday, former NFL wide receiver and current NFL Network analyst Nate Burleson made it known that Pittsburgh Steelers head coach Mike Tomlin shouldn’t be forgotten about come time for the votes to be casts.

Burleson started off his campaign for Tomlin by talking about him having to overcome the retirement talk of quarterback Ben Roethlisberger at the start of the offseason in addition to him needing to deal with the holdout of running back Le’Veon Bell as well as the public trade request made by wide receiver Martavis Bryant.

“And with all that said the Pittsburgh Steelers are 9-2 and atop the AFC,” Burleson said. “So, instead of imploding — which is what we’d thought they’d do — they just started exploding on the league, and Mike Tomlin detonating the switch. And so with all this conversation we’re gonna have about these coaches and what they’re dealing with and how they have their teams at the top of their divisions and conferences and in the NFL… let’s not forget about Mike Tomlin. Not just what he’s done in this league, but what he’s had to deal with this year, and has his team not just very relevant, but maybe the favorite to knock down the Patriots and win the Super Bowl.”

Burleson makes some great points and he really didn’t even hit on a few other weekly mini dramas that Tomlin had to deal with season such as the National Anthem saga and the sideline temper tantrum thrown by wide receiver Antonio Brown as well as the four-game suspension that was issued to tackle Marcus Gilbert. With that said, weren’t the Steelers a favorite to win the Super Bowl this season well before the team even started their OTA practices? In short, doesn’t Tomlin currently have his team right where most though he would and should after 11 games played?

Look, I get that Tomlin probably doesn’t get as much credit as he probably deserves on a year-to-year and sometimes week-to-week basis. But with that said, his past history and achievements, which Burleson made sure to point out Thursday, has no bearing on whether or not Tomlin should be considered a Coach of the Year candidate several weeks from now.

In closing, yes, Tomlin should probably deserve some consideration for the Coach of the Year award this year and especially if his team winds up getting the No. 1 seed in the AFC. But with that said, I don’t think he’ll ultimately win it. Instead, I think Sean McVay, Doug Pederson or Mike Zimmer will ultimately win the annual award as those three head coaches definitely have their teams overachieving this year unlike Tomlin, who has his team right where many though it should be.

The Coach of the Year candidate who’s not getting talked about?@Nate13Burleson: “Let’s not forget about Mike Tomlin.”