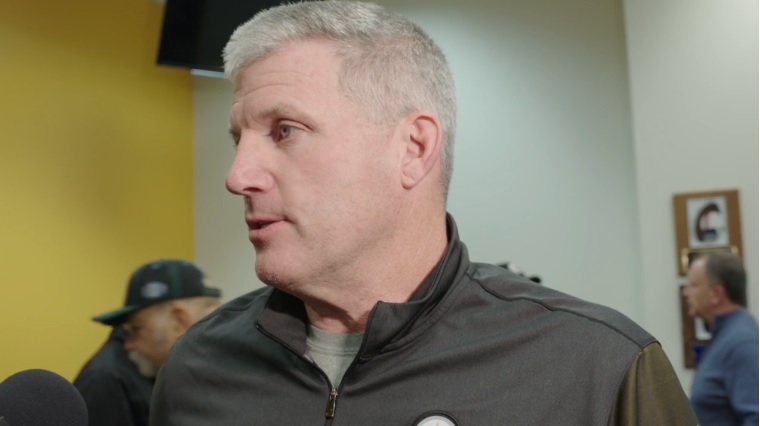 There’s a statement I didn’t expect an offensive line coach to make. But speaking with reporters during the off week, Mike Munchak explained why the Pittsburgh Steelers have thrown as much as they have near the goal line.

“Everyone gets big on big and it’s not as easy as you think,” Munchak said when asked about running the ball on the one yard line. “Everyone wants to prove they can run it in from a yard out and it’s usually easier to pass it in from a yard out. I still think you have people going from goal line formation and throwing the ball more than they [run] it. I think the success rate is much higher throwing it than running it.”

Despite his comments, when the Steelers have had the ball on the one, they’ve run it all three times (for three touchdowns). And frankly, Munchak’s remarks about throwing it more than passing it on the one aren’t exactly correct either.

So I’m not sure where Munchak is getting the numbers from though intuitively, the ideas make some level of sense. It is hard to run the football and teams are opting to spread things out to either win matchups at receiver or lighten the box to make running it that much easier.

No matter how the team or the fanbase views it, the bottom line is that the Steelers do have to perform better in goal-to-go situations. Their red zone offense is dreadful, 31st in the league at 41.4%. Compare that to last year, where they were decidedly average at 54.2%. With this level of talent offensively, and their ability to get the ball into the red zone, those numbers should be nowhere near as low as the reality.

And even if the Steelers think throwing it is a more viable option, when they run it, seeing some more of Roosevelt Nix sure isn’t going to hurt.