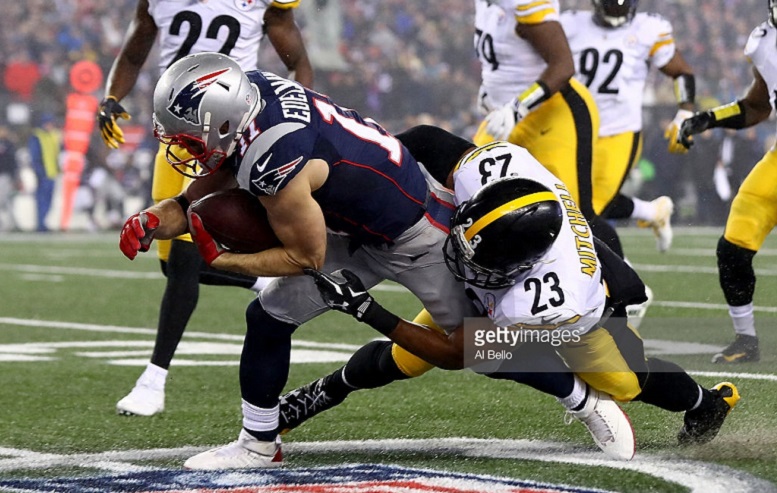 Are the Pittsburgh Steelers currently thinking about playing the Cincinnati Bengals Monday night, or the New England Patriots a few weeks from now? While the politically correct answer from players should be the Bengals, Steelers safety Mike Mitchell probably gave the most honest answer to a related question on Wednesday when he addressed the media.

“We got our ass whooped in the AFC Championship game,” Mitchell said. “I’ve been thinking about them [the Patriots] since it happened. But at the end of the day, I live my life one day at a time, one week at a time. I’m going to prepare for the Cincinnati Bengals because that’s who we’re playing this week. But you’re an asshole – excuse me – you’re not the smartest human in the world if you’re not thinking about them. They’ve been the best team in the league for a long time. They’ve had the best player and best coach in the league for a long time.”

While Mitchell admitted Wednesday that it’s hard not to think about the Steelers quickly approaching Week 15 home game against the Patriots, he assured members of the media that the team is not looking past their Monday night road game against the Bengals.

“It’s tough for me to chew gum and walk so I just want to stayed focused on beating Cincinnati and that’s 100 percent what are team is focused on,” Mitchell said.

Mitchell went on to say that it’s still very important that the Steelers get home field advantage throughout the playoffs this year and not New England nonetheless.

“That’s been the goal since I got here, make the road go through Pittsburgh,” Mitchell said. “I said this in an interview earlier in the week, it’s not going to make the game any easier, but maybe I just dont get woke up at 4 AM.”

In case you don’t get that 4 AM reference, a fan of the Patriots activated a fire alarm in Steelers team hotel in the early morning hours before the two teams faced off in last year’s AFC Championship game at Gillette Stadium in Foxborough. As a result of that happening, some floors of the hotel reportedly were temporarily evacuated.  The Steelers, however, said the incident didn’t force any players or coaches out of their rooms.

I applaud Mitchell’s honesty, but with that said, you can bet that several Steelers players along with head coach Mike Tomlin will be accused of looking forward to the Patriots and thus past the Bengals should the team ultimately lose to Cincinatti Monday night. All of this will of course steam from the comments that Tomlin made about the Patriots during his interview last week with Tony Dungy.

“It’s tough for me to chew gum and walk so just want to stayed focused on beating Cincinnati” Mike Mitchell didn’t hold back when talking about New England and not looking past Cincinnati pic.twitter.com/5ozbwaFCVa