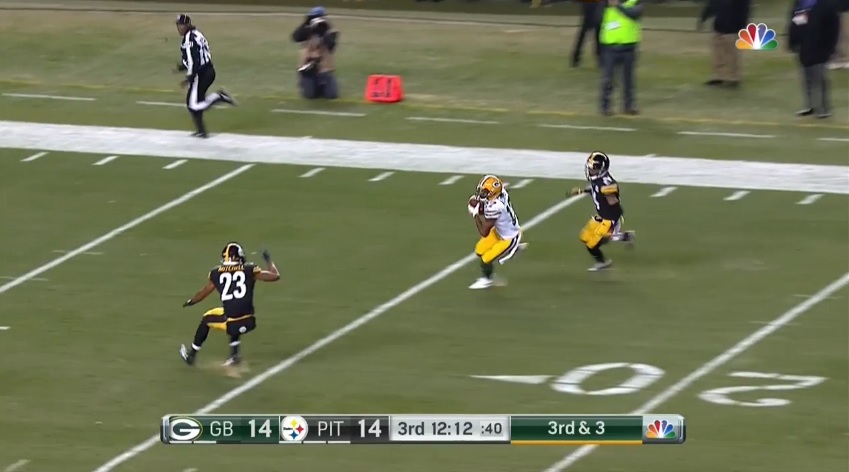 Coty Sensabaugh got beat on a double-move. That much is undeniable. But Mike Mitchell still pins the touchdown on him. After the game, Mitchell was his own biggest critic, admitting he needed to prevent Davante Adams from finding the end zone.

“I’m just critical of myself,” he said via the team site. “It wasn’t like we were in Cover 2 but I pride myself in being a sure-tackling safety. I’ve been able to do that at a high level for us for the last couple years. At saving those big plays when they unfortunately happen. I was extremely disappointed in myself in not being able to get the man on the ground.”

It echoed a point Mike Tomlin stressed in his press conference a week ago, a conversation Tomlin admitted with Tony Dungy serves as a message to his players. It’s also one I’m sure that was shared during the week.

“You’re going to give up big plays from time to time, but we also missed some tackles on those big plays,” Tomlin said in last Tuesday’s presser. “To be quite honest with you, we got to get those plays on the ground. We get those plays on the ground, we got the opportunity to hold those groups to field goals…we’re missing tackles on big plays, allowing people to score. We have to allow our red zone defense a chance to operate by making some of those tackles.”

But Mitchell failed to execute and the Steelers’ red zone defense, which has risen into the top ten, didn’t have the opportunity to do their thing.

“I know people are going to say things about the corners and whatever but I still put that play on me,” Mitchell continued. “Just to be able to make that and save us and give us another blade of grass to defend. There’s a lot of things on that play, we have to have better eyes, but I want to make that play for us. Irrelevant of everything else that happened, I just want to get that guy on the ground for us and make them snap the ball one more time.”

Mitchell has graded out well in our missed tackles report but there’s been some unfortunate “popcorn” on his end of missing tackles in the open field on these big plays. They certainly aren’t easy, Mitchell had a lot of ground to cover on that play and Adams had a ton of space, but they’re necessary. And Mitchell, frankly, isn’t executing the way he needs to.

Because that’s his calling card and his success to the game. Mitchell isn’t the typical playmaking, splashy free safety. He’s a big hitter who wins with his presence, football IQ, communication, and detail to the game. But it’s impossible to deny some of those details have been lacking and clearly, Mitchell is the first to admit it.

It’s not just him. It’s a team issue. Both in the initial big play allowed and in the aftermath. Too many missed tackles, not enough hats near the ball, and good plays become great ones. It’s part two of the secondary issues. Part one is preventing the big play in the first place. But as Tomlin says, they inevitably will, and part two is getting guys to the ground. Mitchell and the rest of the defense will look to improve.