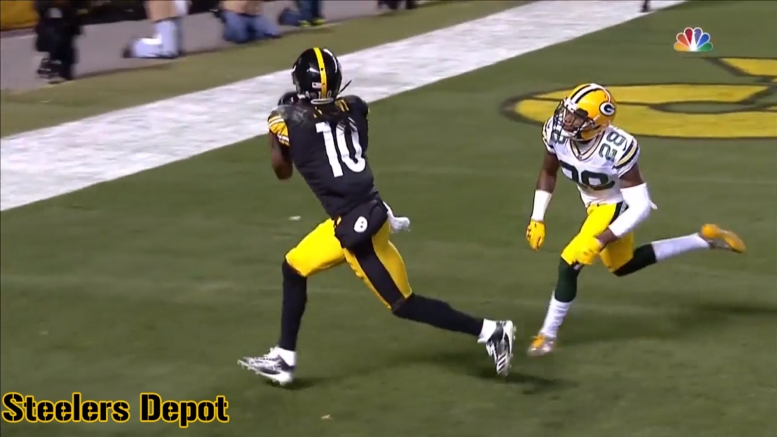 There was so much optimism heading into this season about the Pittsburgh Steelers’ wide receivers, with even players like Cobi Hamilton and Demarcus Ayers being talked up. The former is on a 53-man roster, while the latter has found his way to another practice squad, but there is a reason that they are not on this roster this year.

And Sunday’s game showed that even those who made it over them are far from sure things. Well, everybody not named Antonio Brown. And rookie JuJu Smith-Schuster also certainly looks as though he has some potential, with five touchdown receptions in the nine games in which he has been targeted at least once.

But so much of the optimism about the receiving unit hinged upon the return of Martavis Bryant, and for most of the season, we didn’t see a whole lot from him, for one reason or another. Smith-Schuster’s emergence obviously hurt his playing time, but he was having issues when he was on the field.

We even saw that during the last game, with the rookie sitting out due to a hamstring injury, dropping a pass on a slant route early in the game that threatened to stall an early drive that was moving well. But he made up for it, finishing the game with four receptions for 40 yards.

And 17 of those yards came on a deep target from quarterback Ben Roethlisberger, ending up hallway into the end zone for a touchdown—the first touchdown for Bryant since the second week of the season. For a player who scored 17 touchdowns in his first 26 games, that is a long drought.

Both he and his teammates and coaches are hoping that that moment in the first half was the start of something new, the second chapter in his return to the league after being quarantined for an entire year due to a drug suspension.

We all know the story of his frustrations with his lack of playing time, his lack of targets, his lack of production, and, frankly, his envy of Smith-Schuster’s. He knows he didn’t handle himself well, and admitted as much after the fact.

But if he plays the way he is capable of playing—the way he has in the past—then there is no reasons he shouldn’t see 70 percent of the snaps every game or more, and plenty of targets, especially now that the Steelers seem to be throwing the ball with greater frequency.

“It was great to be back in the end zone”, the wide receiver said of that moment, long coming. “It’s been a long journey. I’ve still got a long journey to go, but it’s on to the next one”.

When he scored his first touchdown in game two, perhaps he was thinking in his mind, ‘first of many’. Unfortunately the journey has been far longer and more strenuous than he anticipated. But he seems to be back on the right path, heading in the right direction.