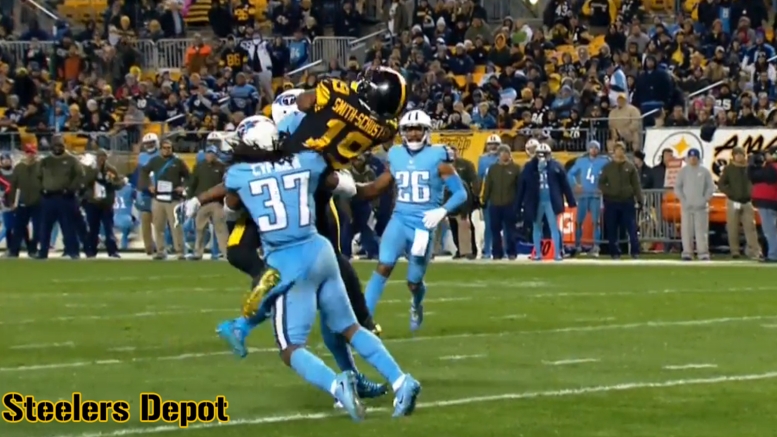 It is an interesting development in light of the past few weeks that I find myself looking at Pittsburgh Steelers rookie wide receiver JuJu Smith-Schuster’s stat line from Thursday Night’s game and viewing it as something of a light workload.

But it was within those receptions that the story is told. And I don’t think it’s a random coincidence that he got his first catch of the game on the second play. after hitting Antonio Brown for 12 on first down, Ben Roethlisberger connected with the 20-year-old for 11 from the outside, sitting down at the sticks against zone coverage.

During the game last night, I couldn’t help but be struck by memories of what Jerricho Cotchery looked like playing with Roethlisberger during his one season in a prominent role, during which he ended up setting a career-high in touchdown receptions with 10.

It compelled me to share that thought on Twitter, after which I was hastily reminded that the comparison I was meant to draw were to Hines Ward and Anquan Boldin. But something about the Cotchery comparison still sticks to me as well.

Cotchery, of course, did many of the same things as the aforementioned did. They are three players of a similar mold, though with varying degrees of productivity. But where Cotchery was ‘Old Money’ in the Steelers’ ‘Young Money Crew’ at receiver at the time, Smith-Schuster is something of a breath of fresh air, fresh of the stench of money altogether.

I see Smith-Schuster as a veteran Cotchery with a younger Cotchery’s athletic ability, and then some. It his mixture of natural talent and youth coupled with a wisdom and feel for the game beyond his years that makes him such a compelling study.

The rookie’s highlight play of the game, of course, came early in the second half. After Roethlisberger looked for him 31 yards down the field in the end zone against double coverage—he went up and made a play on the ball, to his credit—the offense eventually found itself in third and 11 at the 17.

This is why you REALLY should be excited about @TeamJuJu and exactly why there were Anquan Boldin comparisons pre-draft. #Steelers pic.twitter.com/klRKisgOhI

Lined up isolated outside the numbers on the right side, Smith-Schuster ran the post and went up for a high pass that was thrown behind him, grabbing the ball with two powerful mitts, taking a hard lick from behind courtesy of Jonathan Cyprien. In spite of his body contorting slightly backward, he held on, setting up first and goal.

That is the play that the fan base should really be excited about, I think, even more so than the 97-yard touchdown from a few weeks ago. That is the sort of Cotchery play, the chain-moving, drive-extending work that the Steelers were looking for when they drafted him.