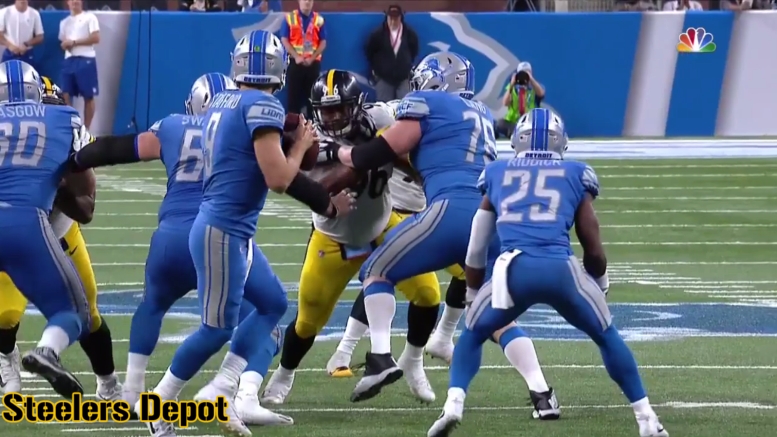 When John Mitchell likes you, he really likes you, He’ll got to bat for you. Maybe even serve as a character witness in your murder trial. But you really have to impress the longtime Pittsburgh Steelers defensive line coach and assistant head coach before he’ll start saying nice things about you—at least ones that are free of pretty damning caveats.

But he paid third-year defensive lineman L.T. Walton a very high compliment recently, telling Chris Adamski recently that “this guy could be a starter for a lot of football teams in this league because he’s smart”.

Now, I’m not so sure I would go that far, but the former sixth-round pick out of Central Michigan did start six games, including the postseason, a year ago when the Steelers were in dire straits along the defensive line. Cameron Heyward was out for the year, Stephon Tuitt and Ricardo Mathews were both banged up, and he was virtually untested.

This year, Walton has been limited to a reserve, deep rotational role—though he has also expanded his repertoire to include nose tackle snaps—in spite of the fact that Tuitt has missed most of the season because the Steeler also added veteran defensive end Tyson Alualu in free agency.

But that doesn’t mean the Steelers, and his position coach, are any less appreciative of what Walton brings to the table every day, and why he has stuck around for three years now as a late-round pick. “This guy is a pretty good football player”, Mitchell said of him, modestly. “He picks up things. He runs well. He’s strong at the point of attack, and he’s a good technician”.

He even said that Walton is “right there” with the other defensive linemen—though he very tellingly mentioned everybody except for Daniel McCullers. “He could play anywhere on defense we asked because he’s very intelligent”.

Through eight games, he has recorded six tackles, though on last Sunday he recorded his first tackle since the third game of the season. He had three tackles against the Bears that week. Against the Lions, he also recorded a batted pass and hit Matthew Stafford off of play action as the quarterback turned into pressure.

According to Pro Football Focus, Walton tied a season-high with 18 snaps played against the Lions, previously seeing 18 against the Bears, and 17 in the opener. Those are the only three games in which he has logged more than 10 snaps, playing a total of 84 on the season to date.