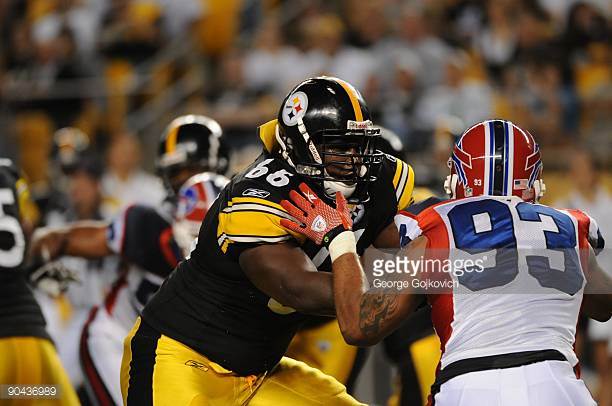 Bringing you another Pittsburgh Steelers’ interview courtesy of our good friend Ron Lippock of the Pittsburgh Sports Daily Bulletin. Today, Ron talks with Tony Hills, an OT drafted by the team in the 4th round of the 2008 draft. He spent three seasons with the team. In the interview, they discuss how Hills’ upbringing shaped his NFL attitude, how he thought he was going to the Chargers, and playing Connect Four with Troy Polamalu.

First, you recently retired from the NFL. What are you doing with yourself now?

I’ve started a non-profit – Above the Hills. I’m providing young children of color history and education about life outside the United States. I’m trying to help them make the right choices. They come from tough backgrounds and I’m trying to show them that they don’t have to be a product of the environment they are raised in. They can be the product of the choices they make, Not their environment.

I’m also an independent rep for World Ventures. Basically what I do is help families go on lavish trips at a fraction of the normal cost. I give them the trip of a lifetime. It’s been a lot of fun getting that in order. That, and soon I’ll be turning the keys to the ignition with my brother as we open up a trucking company. We’re setting that up now. So, a lot of good things happening. I’m excited for it all!

So, that’s a good segue. It seems you’ve adjusted well to post-NFL life. How did that happen for you?

It wasn’t bad. The difference between me and some of the other guys is that even when I was playing I had an idea of what I wanted to do after football. I did a lot of public speaking in Houston. There are different ways to make an impact, and I believe that if you try to make an impact, the finances will follow. I was ready to retire. A lot of people have that dream taken from them. I could walk out on my own. I actually had a contract in place and could have gone to my tenth training camp. I thought maybe I was done, then I was sure and hung it up.

Stepping back, how was the draft process for you – were you surprised the Steelers drafted you?

I had one meeting with the Steelers at the combine. It was fun. We talked football and family. Some nickname jokes. But I thought I was going to be drafted by the Chargers, to be honest. I was thinking the third round. That made sense to me. They invested in me – flying me in from Dallas to meet with the head man and the offensive line coach. When I left there I thought to myself, this is where I’m going. I was naive!

When the draft started, the first round went by and I was fine. I knew I didn’t have much of a chance. By the third round, I was getting excited. It was getting down to San Diego’s pick. I was looking at the picks and the clock, and when it came to San Diego, they announced the pick as…Jacob Hester. I was like, Whaaat? I had no idea what was about to happen then. I actually played with Limas Sweed in college and roomed with him. He was the Steelers second round pick. In the fourth round I got a call from an unknown number and it was Mike Tomlin and Kevin Colbert…Tomlin asked me if I wanted to be a Steeler, and I said “Damn Right!” It all started from there.

Who helped you most as a rookie to adjust to the NFL?

The whole team helped. Guys like Hampton and Polamalu. I vibed well with them. Farrior – I vibed well with him too. Surprisingly, me and James Harrison were pretty cool. We both enjoyed working out. And practicing versus the most dominant outside linebacker, getting my butt kicked. That helped me learn from the best. Starks, Colon…they were big influences. Trai Essex always answered questions. The whole environment was conducive to rookies. There wasn’t much hazing. There was some fun but guys wanted to win. Nothing crazy.

I remember when they put in the pool table. That was a big thing, Just how competitive guys were in anything. Trash can basketball…Dennis Dixon was athletic in so many different areas. Basketball, football, baseball. He even bowled a few perfect games. He and I would compete at basketball at Dave and Busters to see who pays. Troy and I used to be the stragglers in the locker room. I remember one time he and I talking about God and faith over a competitive game of Connect Four. And Chris Kemoeatu. He and I had many good talks. He was a real good friend of mine.

What happened in 2010 when you were released?

As much as the team is run like a family, it’s still a business. I don’t want to get into some things but some things could have been handled better. I just had my first child and things could have been better addressed. We could have worked things out. I had to make a decision to provide for my family. The things I wanted they wouldn’t give up at the time. To be honest I felt a bit betrayed. I felt like I performed well enough for a bigger role. I didn’t ask for a release but we all understood the situation that led to things going another direction.

You played for a number of teams over your career. How hard is that, especially with a family, to have to move around from team to team that much? How do you handle that?

I can only speak for myself. The environment I was raised in bred me for the life the NFL presented me. I was able to adapt and work towards the right path during the difficult times in life. Those difficult times made things in the NFL easier to adjust too. I had a friend in high school who did some questionable things and we talked about it. I was looking towards my future and changing my ways. He understood I was going to college and that all inspired him. The next day he ended up losing his life. What do you do as a seventeen year-old?

Those things were happening all around me. It hardened me to things. The rest of the NFL was a cakewalk after that. When I’d get frustrated I would do recall on those times. I’ve been through tougher times. That mentality allowed me to last. I didn’t have the career I thought I’d have but I had the career I needed. I made contacts and it prepared me for life. With a wife and kids, I don’t get the ability to feel like not working and telling them that life beat me that day. I don’t go to work, they don’t eat. I came from what felt like a war zone.

So now I credit God for putting me in the situation that allowed me to give back to the community I came from.

Any advice to those kids that want to play in the NFL some day?

Always put your all into everything you do, but don’t let what you do define you as a person. If you make it to the NFL that’s great. It’s the opportunity to live a dream. But if not, you can say you gave it everything you had and move on to the next thing. There are 32 teams and over 53 players on a team. There are millions of kids all trying to do one thing. For every one success story there are one-to-two hundred thousand that never get that opportunity. And of some that do make it, most only get two-to-three years. Then, what do they do?

So, pursue it with a passion. But don’t let it define you as a person.