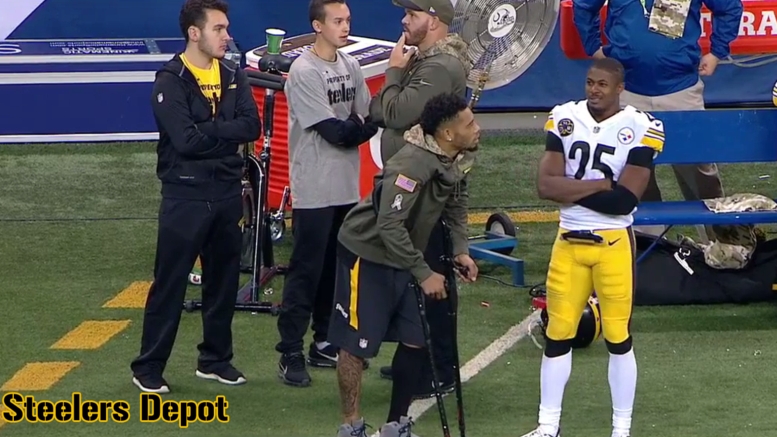 Last Sunday, the Pittsburgh Steelers for the first time in over three years fielded a fully healthy starting lineup on both sides of the football. Naturally, they lost two starters during the course of the game, one to a relatively significant, though perhaps not season-ending, injury.

Both of those injuries occurred in the secondary, so the Steelers have played about three fourths of the first two games of the second half of their season with an underpowered defensive backfield. Cornerback Joe Haden suffered a high, mild fracture of his fibula that figures to see him down for at least another couple of games, while safety Mike Mitchell suffered an Achilles injury.

At least with Mitchell, he was able to return to practice, even on a short week, so one would figure that he stands a good chance of being able to suit up and play in the Steelers’ next game. We should know more about that tomorrow during head coach Mike Tomlin’s press conference.

As for Haden, we should learn more about that tomorrow as well, though that one requires more patience. The injury only occurred a little over a week ago, and the optimistic scale was three weeks. Still, he will have had about five weeks by the time the Steelers play the Patriots.

Will he be up and running by then? And will he pick up where he left off? More importantly, how will Coty Sensabaugh look in the meantime? At some point this week, I’ll do a breakdown of his work from Thursday’s game as we get more into a normal weekly routine, but there was obviously good and bad in his first start.

The Steelers still have one of the top-ranked passing defenses, though it has been trending in a negative direction. They have given up six of their seven explosive plays of 40 or more yards in just the past three games, as well as three of their nine touchdown passes in the last two. Their yardage allowed has gone up, but they have also gotten interceptions.

Hopefully next week’s game, at home, against a struggling backup quarterback who was just shut out, will be something of a get-right week for a secondary that has begun to show chinks in the armor, and that has suffered some casualties.

The Steelers without question need this back end to be running at full capacity by the time the postseason rolls around, as it was arguably their single biggest issue in the playoffs from last season, or at least their most problematic position group.

Artie Burns and Sean Davis, I think, both had down games, even though the latter had an interception. Mike Hilton was beaten for a big play or two, though he, too, picked off a pass. They need to come out and start playing better from snap to snap than they have been the past few games.