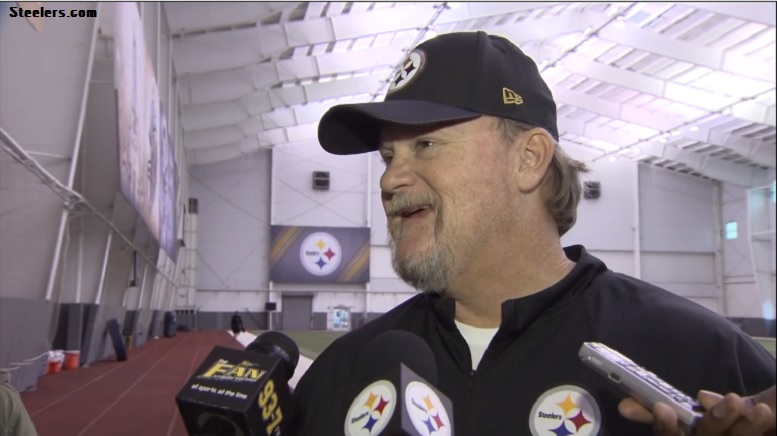 Pittsburgh Steelers quarterbacks coach Randy Fitchner has been around Ben Roethlisberger since 2007 and during that span of time he’s watched him throw quite a few passes. On Monday, Fitchner let it be known that he isn’t overly concerned about Roethlisberger’s play during the team’s first eight games that included the quarterback throwing 9 interceptions and completing just 61.1% of his pass attempts, which is well below his career average.

“I still feel the accuracy, I still feel the ball coming out,” Fitchner said Roethlisberger’s overall arm strength, talent and other qualities when asked about them. “You all are out here at practice every day. There may be a moment or two in time where he may throw it like a 36-year-old. And maybe a 36-year-old has a moment where the ball doesn’t come out perfect, but we’re talking about perfect, we’re not talking about good enough and special because that’s generally what he is.”

Fitchner said Monday he still believes Roethlisberger has the accuracy needed to play effectively and that often times the mistakes he makes are situational. He also acknowledged that Roethlisberger isn’t shy about putting the blame on himself when something goes wrong.

“You get used to the Superman cape coming off all the time and it just hasn’t yet, maybe,” Fitchner said. “There’s been series, there’s been plays, there’s been really a lot of unique plays made. But I think everyone, including ourselves, we get caught thinking that Superman cape should be coming off every play when it doesn’t necessarily have to. And again, if we protect the ball and we keep giving ourselves a chance to win, that’s the end story and the end game.”

Fitchner was asked Monday if he thinks Roethlisberger might rely too much on targeting wide receiver Antonio Brown.

“I don’t know if you can ever be too reliant,” Fitchner said. “I mean, he’s proven, he makes plays. I think sometimes it goes back to people. If you’re in a situation in a game and you’re trying to make a play, you go back to situations where guys can make plays for you. And like I said, you see the little chemistry between him and JuJu [Smith-Schuster] and we’ve seen chemistry with him and 10 [Martavis Bryant] before. So, it hasn’t mattered who’s playing, the ball has to be dispersed to the right guy more often than not and obviously there’s times where it might go to A.B. and A.B. makes that special play. But they’ve done that for a long time together.”

Fitchner said Monday that during the team’s bye week that the plan was for Roethlisberger to get some rest.

“One of the things was rest this week and you notice he didn’t get a whole lot of work in that regard as far as throwing and things like that and just trying to rest up for the last eight weeks,” Fitchner said.

So, is that some Fitchner and the rest of the coaching staff needs to be more cognizant of as Roethlisberger has gotten older?

“I definitely think you should and we have,” Fitchner said. “Generally, on Wednesdays, he doesn’t practice much. We don’t script him in to a lot of the practice and then he just casually keeps pushing himself in more and more. And this just gave him time to be able to say let’s just back off a little bit and it’s been good for him. I think he was fresh today and wanted to kind of go and we held back. And so, he’ll practice on Wednesday.”

In case you’re curious, Roethlisberger hasn’t been great in games that have followed bye weeks the last three seasons. For starters, the Steelers are 0-3 in post-bye games the last three seasons and Roethlisberger threw just four touchdowns and five interceptions in those three games. Sunday, Roethlisberger and the Steelers will play the Indianapolis Colts on the road and it will be interesting to see if the quarterback can start the second half of the season in grand fashion.

“We do it pretty regularly, weekly,” Fitchner said we asked how much assessment he did of Roethlisberger’s first-half play during the team’s bye week. “We try to evaluate the good and the bad and the things we need to keep improving on. I think the games that we didn’t play really well in kind of speak for themselves and the games where we probably played solid enough, we did a nice job. Not necessarily critique as much as just looking at what we might have to do ahead and the upcoming opponents and kind of where he needs to be at that point.”