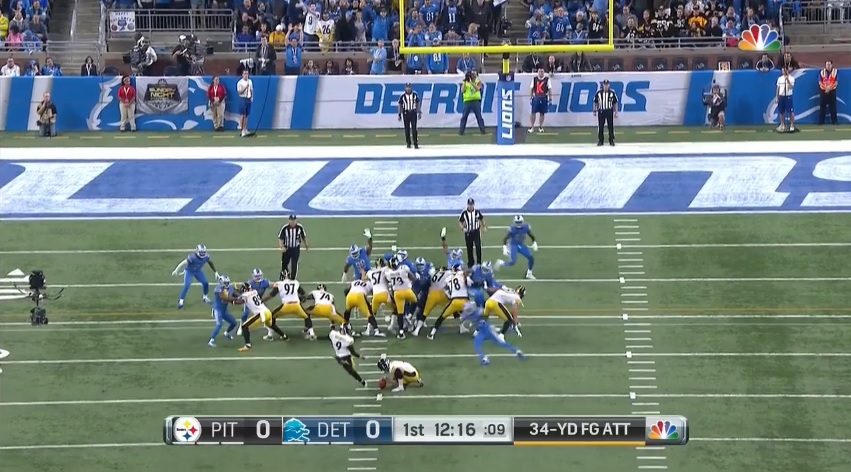 Steelers’ Nation, you know I’m a big fan of Danny Smith. If I was dressing up for Halloween, I’d go as him. Headset, 20 packs of gum, and the raspy voice of a 30 year smoker. Special teams can’t be judged off numbers only and we’ve discussed the issues of pinning the return problems all on him. But there’s one incredibly frustrating part of the Pittsburgh Steelers’ special teams. It hasn’t gotten better and in fact, may have gotten worse.

At the rate they’re going, another kick is getting blocked.

The issues showed up on Chris Boswell’s first field goal, a 34 yard conversion, Sunday night against the Detroit Lions. Check it out below. Lions overload the left side and the left end runs in untouched. Honestly, he should’ve come away with the block.

Same thing happened the week prior against the Cincinnati Bengals. Remember Smith chewing out Jesse James at the end of the half, David DeCastro forced to play peacekeeper? This is why. Allows the pressure, just as he did in the first clip.

And of course, you remember the play where the Steelers suffered the consequences. Week 3, the blocked field goal at the end of the half. This time, it was Xavier Grimble at fault.

I’m not the special teams expert but the issue is with the punch on the outside rusher. Grimble’s was too high, James’ seem to be too late. There’s no question it’s a sucky job. You have to protect the inside lane first and the defense is overloading one side. It’s not fun, it’s not easy. But you don’t have to do much to stop that outside rusher. A slight shove, get him off track, slowed down a bit. It’s that quarter second difference that’ll prevent a play like that from happening.

I get that every play is going to look close because of how the defense is aligned but these have been too close. And the Steelers will continue to be tested.

As Matthew Marczi pointed out to me, there is some good news. Stephon Tuitt is expected to be back after the bye and he usually works as the left wing on field goals. That’ll shift Vance McDonald to the right side, who hasn’t really had these problems, and hopefully the issue will dissipate.

Boswell’s been perfect this year. But the protection has not. It’s cost them before. Without change, it’s going to happen again.