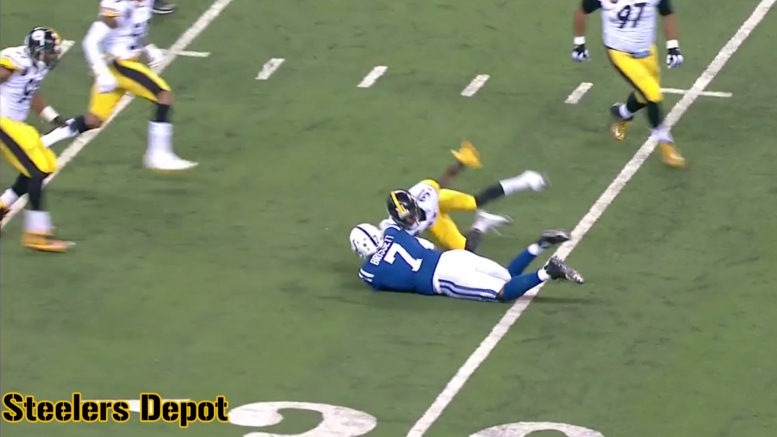 Is Mike Hilton everybody’s favorite player by now? Not that it would be a bad thing, but it is just an observation. The former undrafted free agent, who emerged onto the scene this year as a first-year player taking over the nickel cornerback spot, has quickly become a fan favorite for the Pittsburgh Steelers, and deservedly so.

Beyond the obvious underdog status he yields, and the comparisons (and contrasts) between himself and former teammate Senquez Golson, Hilton is simply a player. He may be undersized, but he’s not underpowered, and he plays a complete game, including sticking his nose in during run support, getting home on the blitz, and even covering punts and kicks.

He doesn’t even seem to get targeted a whole lot, so most of the plays I end up talking about when it comes to him are either running plays or blitzes. In this first instance, it’s his heads-up play on a third-down scramble, breaking off his coverage after identifying what is happening and making the stop.

Later on, he made plays, or helped to make plays, against the run, especially against Frank Gore. The Steelers had him run blitz a handful of times during the game with effectiveness, including this one-yard stop.

He did so again just a few plays later, though this time he was unable to finish the play. It was a tougher angle with Gore more aware both of his presence in the play and his presence in the game, having just done the same thing earlier, and was able to jump cut out of the way, but the interference slowed him down and Stephon Tuitt finished the play for a two-yard loss.

One play that we have talked about a couple of times since the game ended was the second touchdown pass, a 61-yarder to Chester Rogers. Alex Kozora already broke it down in details more nuanced than I would supply, but it seems pretty clear here this wasn’t his blown assignment. He still should have made the tackle though.

Later in the third, both he and Sean Davis blitzed as a pair, both of them getting home and knocking Jacoby Brissett down on a second-won pass that forced him to throw the ball away.

Finally, he blitzed once again in the fourth quarter, and again helped enable Tuitt to make a play. while Brissett was able to sidestep Hilton’s initial pressure, it threw him off his and reset his eyes, allowing the defense to swarm, with Tuitt the one to finish the play for his first sack of the season.

There really isn’t much to complain about when it comes to Hilton, or at least there hasn’t been yet. He’s missed a few tackles, but frankly when you’re talking about this defense, in spite of the strides they’ve made as a whole, that’s just taken as a given at this point. And he also makes a lot of solid tackles as a tradeoff.