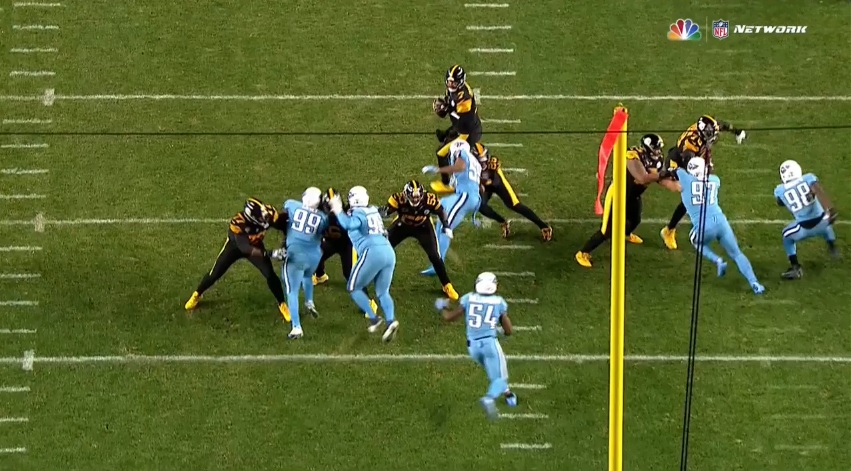 Le’Veon Bell is the best back in the NFL. I hope you were sitting down for that declaration. His patience, underrated power, contact balance, ability out of the backfield. Watch any primetime game, and you’re in luck because there’s a metric ton of those up ahead, and that’s what will be highlighted.

But one area Bell excels in and gets little love for is his pass blocking. That was on full display in Thursday’s win over the Tennessee Titans. We’re going to check out a couple of those clips today.

The best example came on a play where Bell got rocked. But playing running back isn’t all about the glitz and the glam. It’s dirty, grimy. But Bell put his face in the fan to give Ben Roethlisberger enough time to get this pass off.

That is a decidedly unselfish play. That one hurt, Bell got run over, but it was required for the play to have a chance (and I’m mad at Martavis Bryant for not coming down with the football).

But it was one of several great plays Bell made in pass protection. Here’s a montage of them.

Le'Veon Bell was so good in pass protection Thursday. Big impact on the game even if the Steelers aren't running the ball. #Steelers pic.twitter.com/b913wSCzQ2

His ability to recognize blitzers, get square to his blocks, and execute is the cherry on the top of his elite game. Those are the things that, to me, make him elite. How well-rounded he is and his ability to play at a high level despite the heaviest workload in the NFL, both in touches and just as importantly, snap count.

Bell is still rocking a 90% snap count on the season, more than 10% than the next closest running back. If he remains at this pace for the rest of the year, and honestly, I hope he doesn’t, he’ll be the first back to play 90%+ of the time since Matt Forte in 2014.

That’s what is going to make him so tough to replace if and when he leaves (after 2018). Not just what he offers as a runner but everything else. It’ll take a village to replace him.