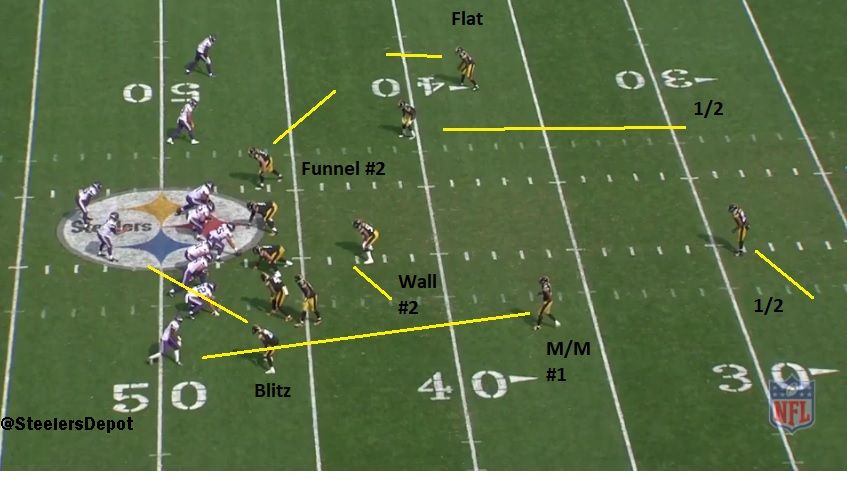 Usually when we break down one of Keith Butler’s blitzes, we rely on Dick LeBeau’s old playbooks. Most of what Butler has done in his three years replacing LeBeau, blitz-wise at least, have been LeBeau’s classics. His Storm, his Triple Fire X, his SAM Fire Zone have all been what LeBeau drew up.

But this year, Butler has stamped his own blitzes. I wouldn’t call this one we’re going to cover today a favorite but it’s one he ran three times against the Tennessee Titans, bringing it to eight times this year. We’re going to break down the coverage and the variations of it.

In a nutshell, it’s a fire zone with the boundary cornerback on the outside blitzing the B gap. The nickel corner away from the blitz will rotate to the deep half.

We’ll focus on the blitz first and then the coverage.

Corner blitz from the boundary. The edge rusher, either the OLB or ILB lined up on the edge (often one tell the blitz is coming) is going to be the contain guy and take the C gap, drawing the offensive tackle’s eyes. The cornerback rushes in behind him to hit the B gap.

The away side end scoops to the C gap to contain the opposite side if the QB is flushed out by the blitz. And the other end/DT often “green dogs” the running back, dropping if the back leaks out and rushing if he stays in to block (which the back tends to do will if he spies the corner). 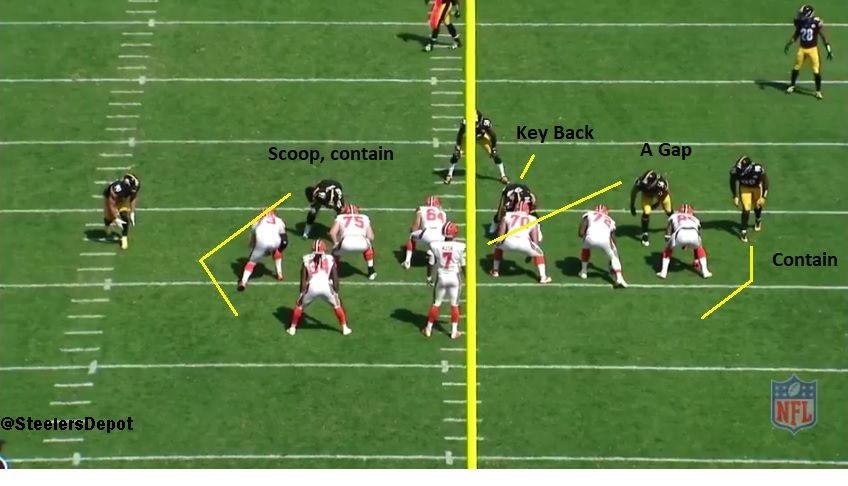 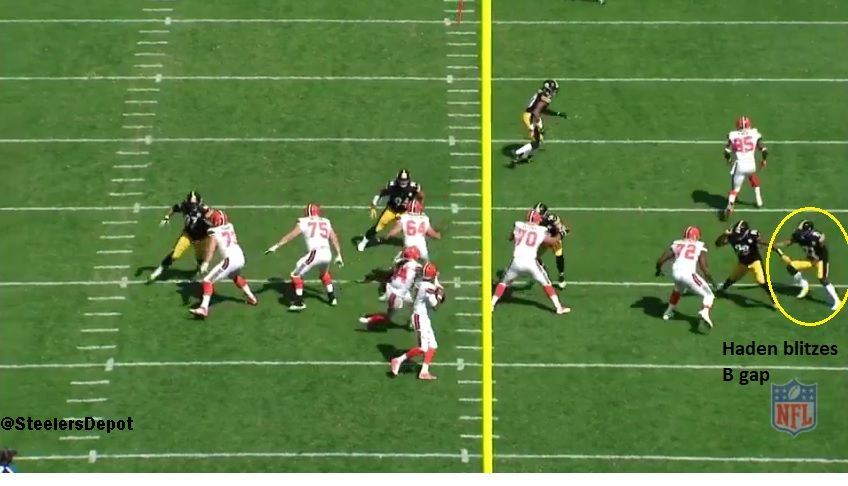 Here’s another example of the NT dropping to take the back. 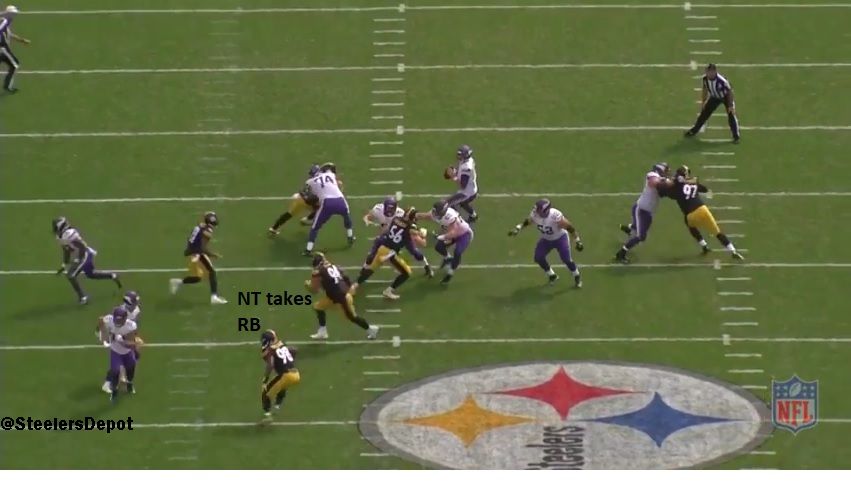 Yeah, I know a defensive linemen on a back isn’t ideal but it’s something. I think Butler switched to it after getting burned on checkdowns and RB screens last season. In theory, they’ll at least get in the way.

Here’s a clip. From Week One, a sack by Joe Haden, how the blitz looks. Get the corner either free or solo on the back and let him make a play.

That’s generally what you’re going to get on any of these blitzes. The coverage though is a little more complicated.

Butler and Pittsburgh have run this blitz versus 2×2 and 3×1 sets. Each coverage is going to look a little different. One constant is how the Steelers replace the blitzing corner. 2×2, 3×1 – it’s the same. The blitz side safety rolls down to replace the corner and plays man coverage on #1.

In 2×2, the #2 receiver to the blitz side gets walled off by the linebacker/dime defender. On the way aside, the dropping OLB (as is usually the case on Butler fire zones) has to get outside leverage on #2 and force him inside so he can’t expand down the sideline and instead, gets funneled to help.

Here’s it drawn up. 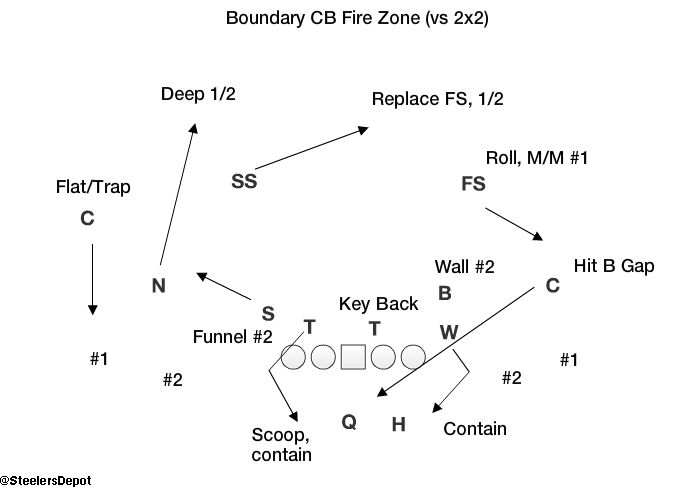 And here’s two looks at it all together, first drawn up and then the clip of the play. 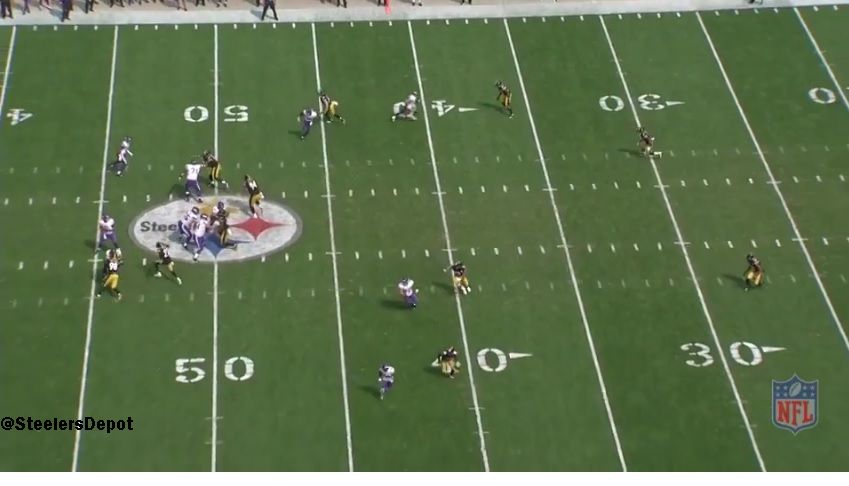 3×1 is a little different. Again, the safety to the blitz side rolls down to man up the #1 receiver, just as they do in 2×2. To the trips side, the linebacker low-walls #3 to take away anything short and inside.

Again, it drawn up. 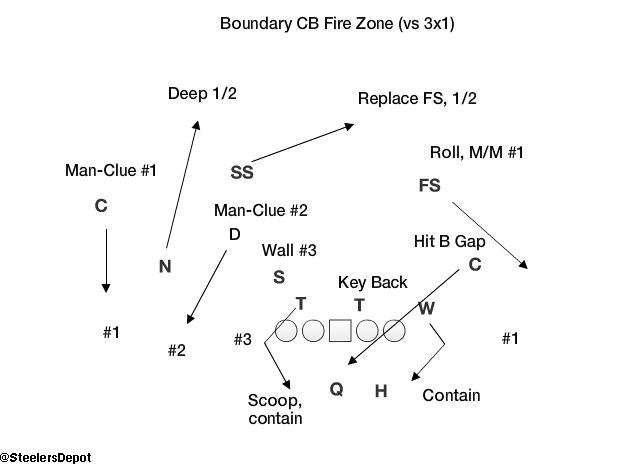 In dime, the dime defender will man-clue #2 and the corner man-clues #1. They’ll match anything vertical and play man-to-man.

Again, we’ll draw it up with clips from this year. 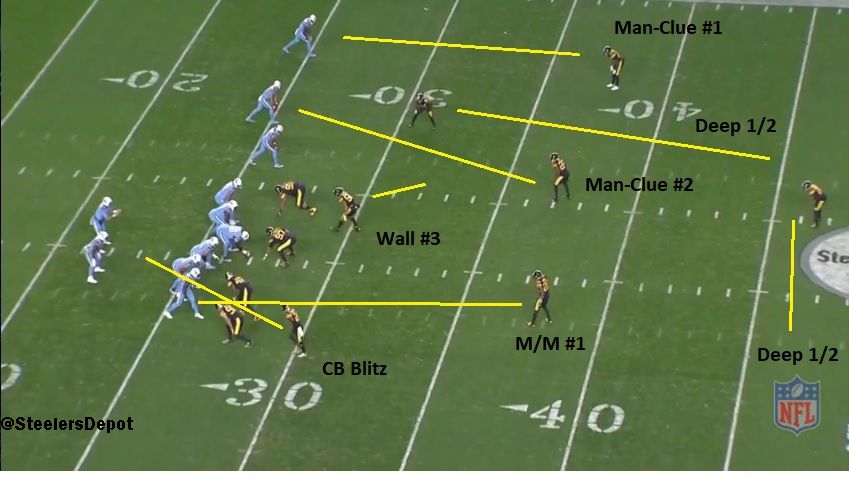 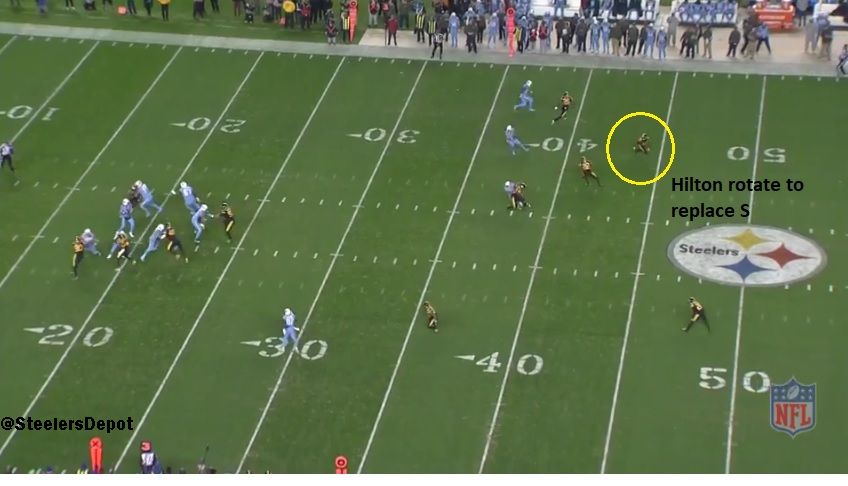 This one is from Mike Hilton’s interception Thursday night. The INT was mostly created because of a high Marcus Mariota throw but Hilton had gotten depth and vision on the ball to capitalize on the play.

There’s another concept we’ll break down either later this week or next but we’re seeing a new stamp on Butler’s defense. From his over front, to new blitzes, to a team more capable of playing man-to-man, although Butler has been the defensive coordinator for three years, 2017 feels like the year he’s really owning his playbook and this unit.