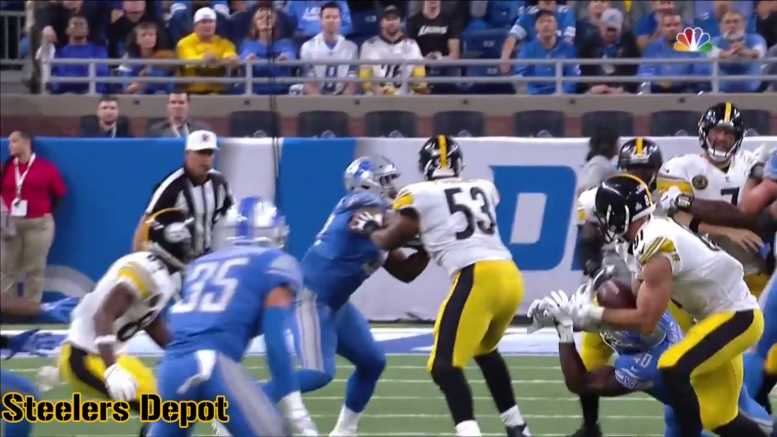 I don’t think that I have even once taken a look at Jesse James so far during the regular season during my film study articles for the Pittsburgh Steelers. I know that I wrote one late in the preseason, but when I have looked at the tight end position, my eyes have admittedly been drawn more often to Vance McDonald.

It’s time to rectify that, and considering that we have had plenty of time to digest the last game, I thought it would be crazy if we didn’t eventually get to cover him at least once. The third-year tight end had something of a big game, by his standards, against the Lions, so why not?

It didn’t start off in particularly pretty fashion, though. On a first-quarter running play, for example, he was slow coming off the line out of a two tight end formation, as the inside end responsible for picking up the strongside linebacker. He failed to, and that linebacker made the tackle on Le’Veon Bell on second and six for no gain.

Later in the game, he was the lone tight end out of 11 personnel lined up to the left of the formation. Set on the outside shoulder of the end, James had to reach block in order to set himself up in front of the right end, but he accomplished the task, even if barely. He tends to have a lot of these plays in which he just barely gets the job done. But the job still gets done.

Unfortunately, he came back on the next play only to see himself rocked back by the end, pushing him into and clogging the running lane for James Conner, which helped attribute to the Lions limiting the rookie back to just a yard on the play.

But he came back at the end of the half with what should have been a play to set up a score, if not for an eventual fumble. Somehow the ball found its way to him through a tight window, showing good concentration to track and snag it, and then awareness and surprising burst to get to the edge for a career-long 32-yard reception.

Early in the third quarter, James caught a short pass over the middle and then took a hard shot that caused him to drop the ball. The helmet-to-helmet hit resulted in a penalty and a no-play for him.

He also had a 10-yard reception that moved the chains and was open for a fourth target on which he was overthrown in space, but that one worked out, because a 97-yard touchdown followed on the next play.