The Pittsburgh Steelers’ bye week is letting us all catch our breath (and lower our blood pressure). And it’s also allowing us to take a deeper dive into certain players and review the first half of the season. Perhaps no one is under the microscope more than Bud Dupree. Entering the season with high expectations, by me maybe more than anyone else, has he lived up to them?

I looked at all of Dupree’s edge rushers this year, 124 in total. We’ll break them down, study the trends, and then look at the tape.

For starters, I charted each type of pass rush move Dupree used every rush.

22 other rushes were used on him being part of a stunt. Another 16 were part of a fire zone blitz.

Dupree has 15 pressures this year. Here is how each happened.

A couple things stick out from the numbers.

– Almost all these rushes are coming from the outside. His rip move almost always happens around the edge too. Rarely does Dupree look to attack the inside half, making it easier for tackles to sit on the speed move and seal him upfield.

He’s countered an outside rush to the inside just four times on the 86 rushes he’s had (not counting stunts/blitzes), which again, tackles are going to see on film study and not have to worry about it.

When he does win, it’s pretty much always with speed and to the outside. His bend around the edge is better but he still has to do a better job of cornering and flattening the edge. Like here. 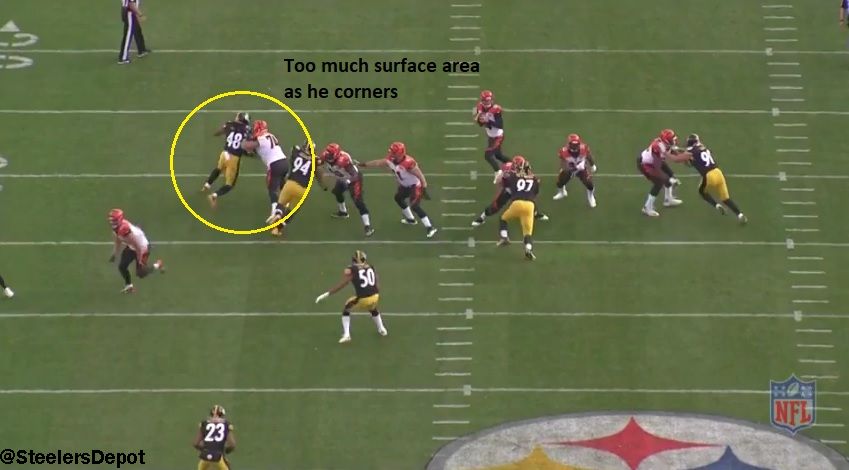 I have two other big issues with him as a pass rusher. Dupree isn’t doing a good enough job converting speed to power. And when he tries to win with something other than straight speed, he’s often wasting too much time/steps to get to the QB. Let’s look at both.

Here’s the first. Dupree coming off the edge, set wide because of the tight end’s presence. As he approaches the right tackle, he slows his speed, faking left and right in hopes – I guess – to get the tackle to commit. A pass rushing game of chicken. But the tackle doesn’t blink and stays in his pass set. Dupree hits him without any power, without any move.

Or here, a bull rush vs RT Mitchell Schwartz. Tries to use a speed bull rush that James Harrison uses so effectively. But as Harrison teaches it, the power needs to come off the 3rd or 5th step, where you convert to power, get hands in the check of the tackle, and rush the linemen back.

Here, Dupree is less hesitant with his bull rush but he’s pushing off on his 4th step. And he isn’t hitting it with near the power he’s capable of, not uncoiling his hips and hands too high. Schwartz is able to reset and anchor. 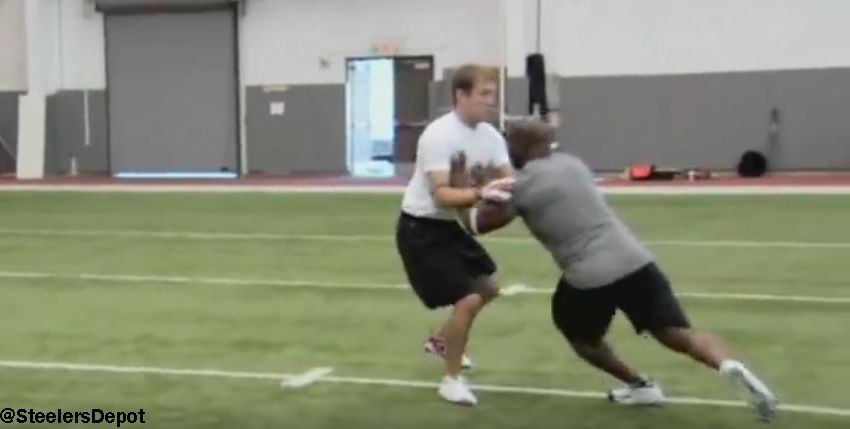 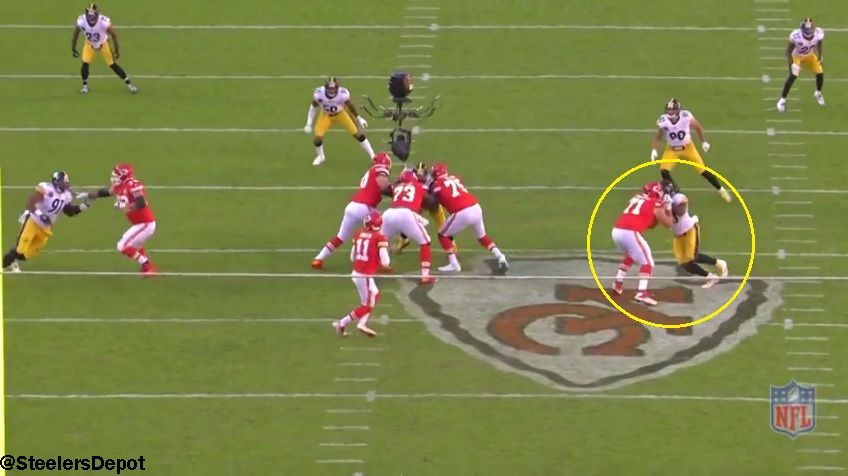 Yeah, Dupree has four inches on Deebo but a strike zone is a strike zone. And Dupree isn’t generating enough power for that bull rush, which he uses often, to be effective.

There are a couple caveats to throw in. Dupree has been hampered by a shoulder injury during the year, probably sapping him of some of that power. He *looks* healthier in recent weeks, letting him stay on his feet through contact. It was ugly early in the year, with him often off his feet and totally out of the play. That was Jarvis Jones’ problem; he couldn’t even luck/effort into sacks because he was looking up at the sky.

And he has been better, even against the Detroit Lions, a game where the pass rush didn’t generate enough pressure. Twice he strung together two moves, using a bull/one-arm stab into a rip move to beat the right tackle. Really effective here, forcing Matthew Stafford to step up into the pocket and take off, sacked by Tyson Alualu.

So it’s definitely not all bad. Just not where it could or should be.

Long story short, let me sum up the key points.

1. Dupree needs to be a more varied pass rusher capable of attacking the inside half of the tackle. He has to have a counter off his outside rush moves so the tackle can’t sit on the edge.

2. He needs to do a better job converting speed to power. More violence in his hands to be able to take control and finish rushes. Even when he’s been able to knock the tackle’s hands down, he’s been unable to finish plays.