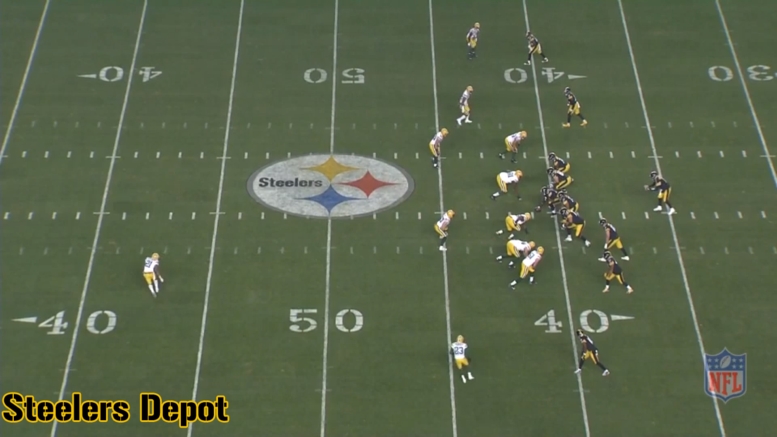 There are a number of people who groan every time the Pittsburgh Steelers break out the five-wide look on offense, lining up their tight end—or ends—in receiving stances while trotting their running back out of the backfield as well.

While the formation basically takes away the run option and keys the defense into an obvious passing situation, it can also help to create mismatches at the line of scrimmage, especially when you have a running back like Le’Veon Bell. The Steelers ran with five wide five times against the Packers, so let’s look at them.

They actually opened the game out of that look, with Bell motioning to the right slot and Antonio Brown to his right on the open side of the field. With Bell drawing overhead coverage from the linebackers coming over the middle, the opened the interior of the field for Brown working one-on-one against the cornerback, resulting in an easy 20-yard reception to start the game against Davon House.

They ran out of the exact same look later on during the same drive, though in a different context. At the Packers’ 20 and facing a third and one, Ben Roethlisberger this time through a quick-hitter to Bell, who used his body to block out the linebackers for the two-yard reception.

Two plays later, the Steelers set up a fake screen on the right side of the field, including a diamond formation with tiered receivers and Martavis Bryant isolated outside the numbers to the left. Facing basically a one-on-one matchup, Bryant easily had the inside leverage for what would have been a big play had he not dropped it.

Later on, at the top of the second quarter, they used their common five-wide formation, only this time with Bell and Brown to the left. On a first and 10 play, Roethlisberger got the ball to Bell in the flat, who was able to get by the first defender for six.

Admittedly I’m realizing late that this isn’t quite a five-wide look based on Jesse James’ alignment, but nevertheless, they were able to execute a screen pass to Bell for 12 yards on second and 13. Not a bad result.

In all, the Steelers were quite successful running out of five-wide looks against Green Bay, with the only negative play being a mechanical error due to a drop. Perhaps it’s not such a stupid plan after all.