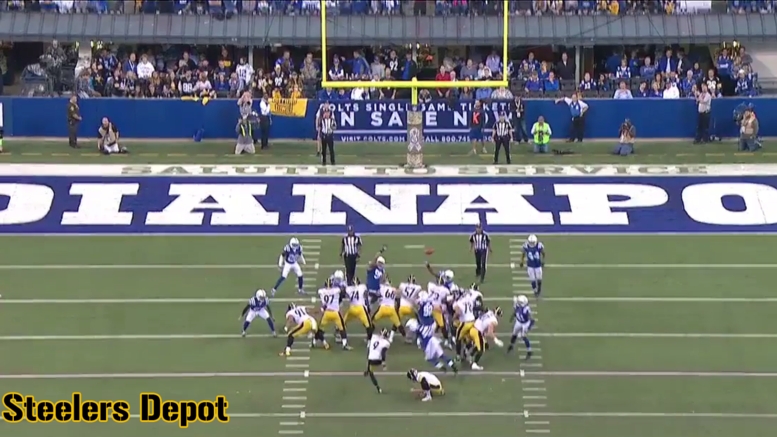 Special teams has been a bigger issue this year than I would have liked it to be. There have been some highs, but I would trade them to get rid of the lows. Most egregious is the fact that the Pittsburgh Steelers have already had two kicks blocked, both of which were very nearly returned for scores, one that would have been a touchdown, and another that would have been a two-point conversion.

This week, it was a point-after attempt that was blocked, and to be honest, it was very nearly blocked by two different players, so let’s talk about the unit.

For starters, what I want to note is that while Jesse James did poorly in allowing the edge rusher to gain penetration and nearly block the kick, something he has done about half a dozen times this year, it was not his guy that ultimately blocked it.

The pressure came between the right guard and end, in this case between Alejandro Villanueva and—Marcus Gilbert. This is notable because Gilbert has been out for most of the year. B.J. Finney has been primarily used in his spot during his absence, as seen from the Lions game.

A couple of weeks prior to that, with Ramon Foster missing that game, they even had to call upon Matt Feiler to fill in for that role. But it is Gilbert’s to man when he is healthy, as is the left wing for Stephon Tuitt, which, you will see in the clips from Sunday’s game.

The first kick came at the end of the second quarter, which was mercifully uneventful. James actually got a decent push wide on the rusher, but you can already see the pressure coming from the Gilbert-Villanueva gap.

And then it got home a short while later in the middle of the third quarter. And you know who it was. Friggin’ Margus Hunt, formerly of the Bengals, because of course they draft and develop gigantic defensive linemen.

In all honesty though, Hunt got a fantastic jump on this play, the first helmet to move pretty much if you catch it in slow motion. Gilbert was among the slowest to react and Villanueva couldn’t lock arms, nearly pulling an olé as he tried to illegally hold the defender.

Unfortunately the ugliness didn’t subside there, as Chris Boswell missed his next kick, a field goal that would have taken the lead. Tuitt had a slow reaction here that allowed pressure, but the miss is fully attributable in my estimation to the kick itself, bouncing off the right upright.

The young kicker made amends by sending the game-winner through the uprights as time expired though, a redemptive rep for the entire unit.

Tuitt took his man down as he came around the edge, Gilbert helped keep Hunt down, and the snap, hold, and kick were all good. This stuff should be automatic, but it never really is. And by that I mean it really never is. It takes a lot of work to make it all look automatic to the point where we perceive it as a play that should be automatic and taken for granted. But a lot goes into it, every time.