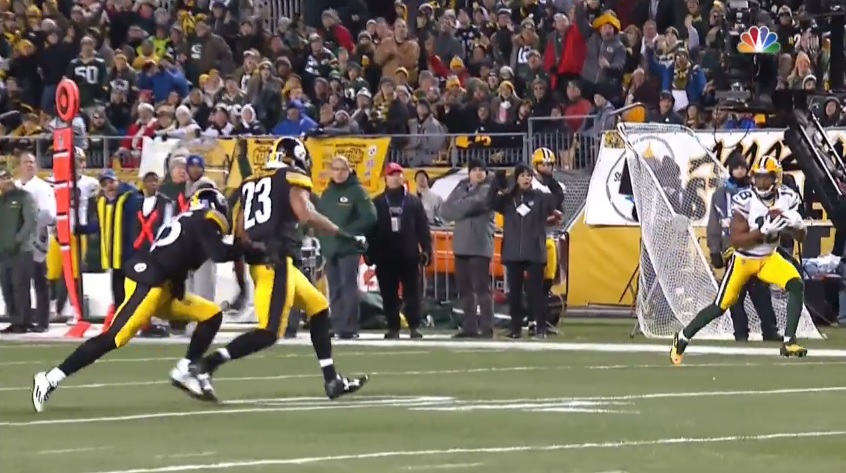 Yes, the bottom line was that the Pittsburgh Steelers got the victory yesterday. It’s the NFL and winning, no matter what the teams look like on paper, is freaking hard to do. Although I like to focus on something positive coming off a win, it’s hard to ignore all that went wrong Sunday night. Defensively, the Steelers can still look like the league’s worst secondary and the chunk plays they’ve allowed is laughable.

So that’s what we’re going to look at first in our Monday film room breakdown. The long touchdowns allowed by Artie Burns and Coty Sensabaugh.

This one is really simple. Steelers are in a Cover 3. Day one install sort of stuff. Three deep, four under zone coverage. Here’s how it should look pre-snap. In this case, it’s five under with Keith Butler sending only three. 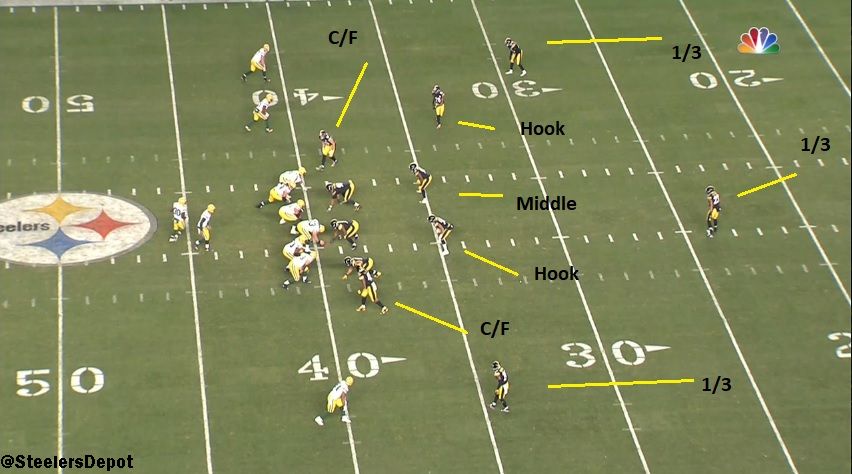 Packers run one of their favorite concepts. Post/wheel with the original #1 (outside receiver) on the post and the original #2 (slot) on the wheel. 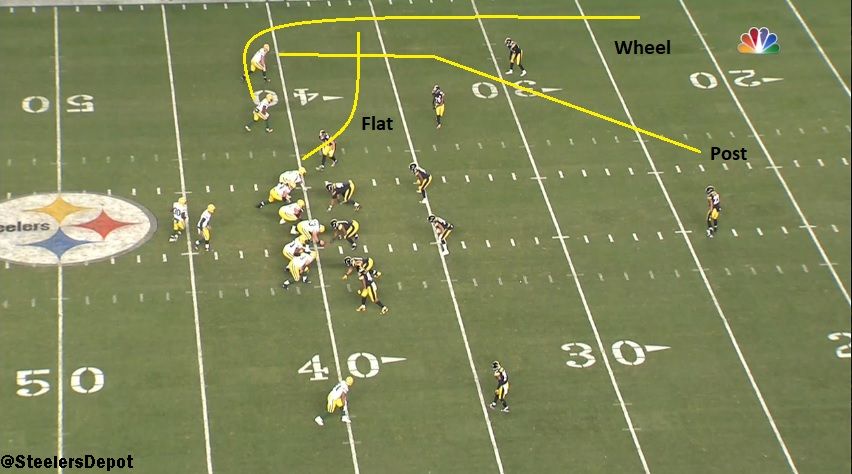 It’s a simple concept of pattern matching or really, just staying in your zone. The slot receiver becomes the “new #1” and coming down the left sideline, Burns has to match him. Mike Mitchell is responsible for the post, now the “new #2” down the middle of the field.

But Burns, sigh, never gets off the post and the wheel is left unattended down the sideline. Easy throw and catch for a touchdown. 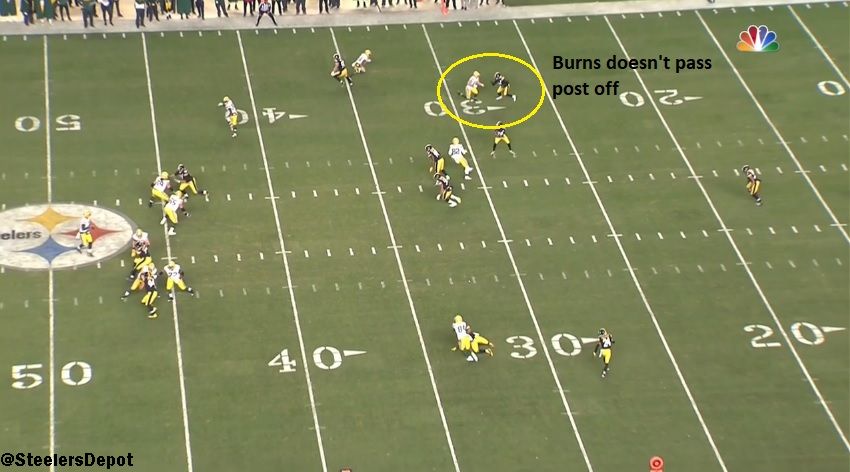 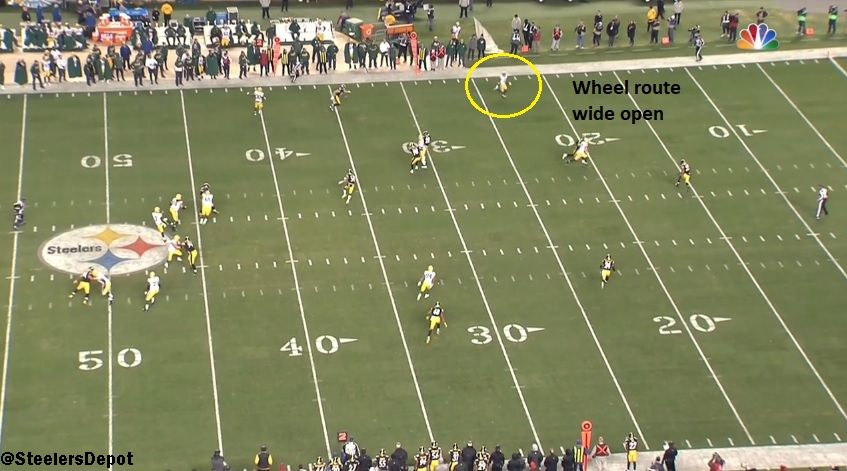 Without a shadow of a doubt, this is on Burns. Not on Mitchell. Not on T.J. Watt. They do their job. It’s squarely on Burns and another mental lapse from him. He’s getting awfully hard to trust in the secondary. Yes, he’s a second year guy but a second year guy with a lot of playing time. Stuff like this is just unacceptable.

And yeah, Mike Tomlin not a happy camper. Good ‘ol F-bomb thrown in there with what, to me, looks like he’s saying “Looks like the F***** film.” Which would jive with the idea of it being a concept the Packers run a lot and should be something the secondary expects and adjusts to without issue.

Sensabaugh wasn’t sparkling either. Davante Adams killed him on this double-move on third and three coming out of the half.

Runs to a depth of five yards, fakes like he’s going to chop down for the quick reception and that’s enough to get Sensabaugh to bite. Once the corner commits, Adams explodes upfield and Sensabaugh is completely caught. Well-thrown ball, no chance for the corner to catch up and Adams does the rest. 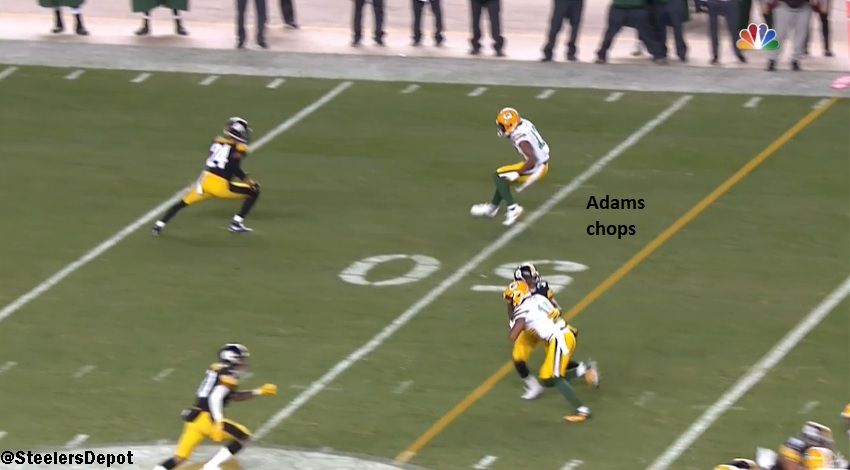 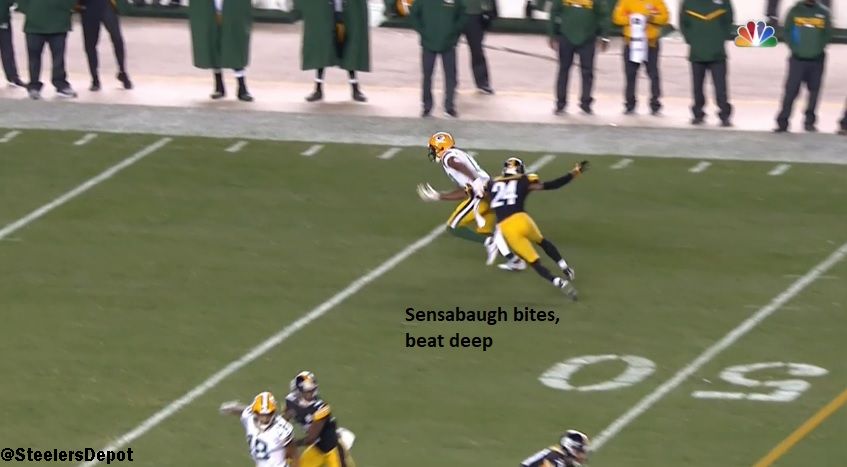 Once again, the Steelers collectively (Mitchell, Sensabaugh) do a poor job of making a tackle in the open field to prevent a good play from being a great one. Gives them no chance to get their red zone defense on the field. Easy points.

The Steelers’ secondary doesn’t have to be great. But they have to be a lot better than this. It’s all about keeping the ball in front of you, forcing teams to go on lengthy drives, and rely on your strong red zone defense to keep teams to field goals.

Chunk plays like this have to stop. Immediately. Or the Steelers won’t go where they want to go.