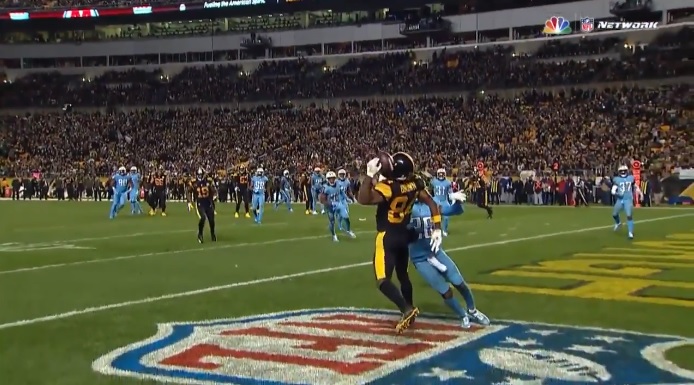 It was all Steelers’ early as Ben Roethlisberger and company led the team to an early 10-0 lead. Roethlisberger connected with receiver Antonio Brown on a 41-yard touchdown pass to give the Steelers an early touchdown.

Brown had a big night, recording 10 receptions for 144 yards and a trio of touchdowns. Brown’s third touchdown came in incredible fashion as the receiver recorded a spectacular helmet catch in the corner of the endzone. While Brown has taken a second seat to JuJu Smith-Schuster in recent weeks, the NFL’s leading receiver got back on an Antonio Brown-like pace tonight.

Roethlisberger was also back to his old self tonight, throwing for 299 yards, four touchdowns and zero interceptions. This would be Roethlisberger’s eighth victory on Thursday Night Football.

The Steelers would get back on the board quickly as Titans’ quarterback Marcus Mariota was intercepted by cornerback Mike Hilton. Hilton returned the interception 26 yards, leading to a Chris Boswell field goal.

This would be the first of two Mariota interceptions of the first half as Coty Sensabaugh picked off the Titans’ quarterback before the half. And just like the first interception, the turnover lead directly to another Boswell field goal and a 13-7 lead.

The second half opened with back and forth scoring by both sides as on the first play of the second half, Mariota connected with Rishard Matthews on a 75-yard touchdown pass. The score instantly cut into the Steelers lead but not for long.

The Steelers would match the 75-yard effort with a 10-play drive that ended off in the endzone. Brown would add his second touchdown of the day, catching a 5-yard touchdown reception to put the Steelers ahead by nine once again.

The red zone offense was rejuvenated in the second half, as the Steelers kept tacking on the tired Titans defense. Another 75-yard drive built on the backs of running back Le’Veon Bell and Martavis Bryant and finished with a 1-yard touchdown pass to tight end Jesse James to go ahead 30-17.

Like in recent weeks, the Steelers defense toughened up down the stretch, allowing no fourth quarter points to the Titans offense and forcing Mariota to throw his third and fourth interception of the evening. The third interception fell into the hands of Robert Golden and the fourth to Sean Davis.

Also helping the defense obliterate the Titans to a 40-17 defeat was the five sacks by the likes of Cameron Heyward (2), Vince Williams, L.T. Walton and Stephon Tuitt.

The Steelers will now enjoy an extended period of rest before welcoming the Green Bay Packers on November 26th on Sunday Night Football.