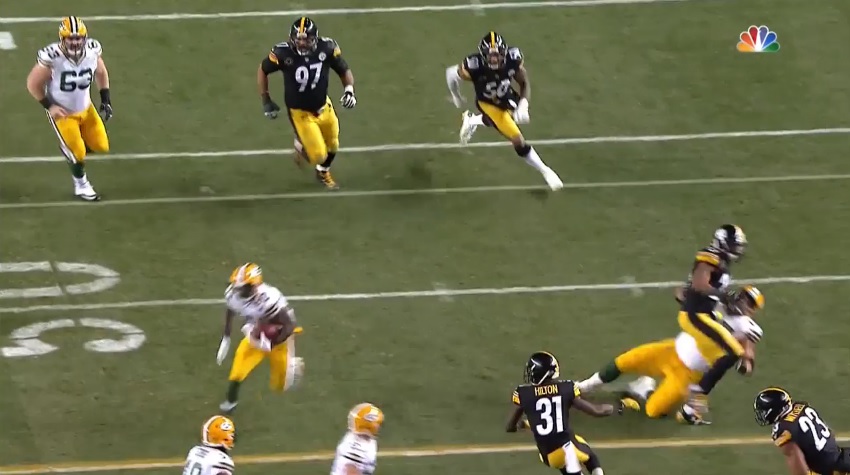 Earlier today, we broke down two of the three long touchdowns the Pittsburgh Steelers allowed last night. The one we didn’t touch on was Jamaal Williams’ 54 yard score late in the first quarter. Sitting with reporters after the win, and his big night, Cam Heyward gave a brief synopsis of how the score happened.

“We gave up a screen,” Heyward said per the team site. “On those screens, we have to contain them so we can get to the ball and have better success. If it’s a ten yard play, it’s better than a 50 or 60 yard touchdown. You tip your hat to them. They came in with a good plan. Hundley played well. But we made the plays when we needed to. Especially on offense and special teams.”

We’ll probably circle back to the play when the All-22 comes it but you can see all the bad angles taken on the play. Each Steeler overruns Williams, letting him cut back and then turn upfield.

Sean Davis, Mike Mitchell, and Mike Hilton are all on the sideline with no one squeezing Williams to the field to slow him up and allow everyone else to rally. Here’s the screenshot of it from the headline photo.

T.J. Watt nor William Gay could catch the rookie, a realization of how Gay has gotten even slower, and it the Packers raced to a 14-6 lead.

Pittsburgh has had the majority of their troubles with the ball going over their heads. But this one went right through them, on 3rd and 8 no less. As Cris Collinsworth pointed out, one smaller issue on the play was the fact the Steelers were in man coverage, making the secondary late to react to the screen (no vision on the ball). That still isn’t a good enough excuse for giving up a big play. And one of several issues the team has to correct to stop this tsunami of chunk plays given up over the last three weeks.