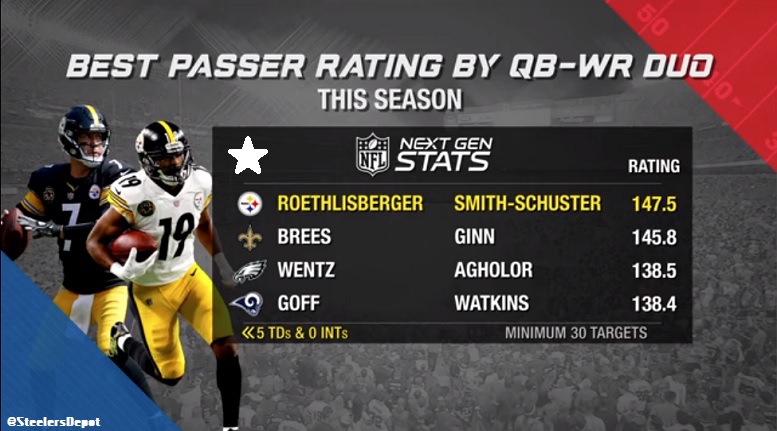 Pittsburgh Steelers rookie wide receiver JuJu Smith-Schuster is certainly having a great first season in the NFL and if it continues, he should be a strong candidate to win the annual league Offensive Rookie of the Year award. So, just how good has the USC product been this season when it comes to him being on the same page with quarterback Ben Roethlisberger? Well, if you watch the recent video featuring Charley Casserly of the NFL Network, you’ll see that the two players currently have the best passer rating by a QB-WR duo in the league this season.

While I’m not as big fan of the old school passer rating stat, its use in this situation is justifiable, I suppose. In case you’re curious, Roethlisberger’s passer rating when targeting fellow wide receiver Antonio Brown this season is just 73.1 and that’s not overly surprising being as the Steelers quarterback has been intercepted six times so far this year when throwing his way.

Smith-Schuster has done a great job in the slot this season as well as he’s averaging 2.27 yards per route from that position through the team’s first nine games, according to Pro Football Focus.

The most productive WRs from the slot this season ? pic.twitter.com/XsnsvhjVNd

Currently, Smith-Schuster has 521 receiving yards on the season and that means he’s on pace to set a new rookie receiving yardage record. He’ll need to average 55.7 receiving yards in the team’s remaining seven games in order to do so.