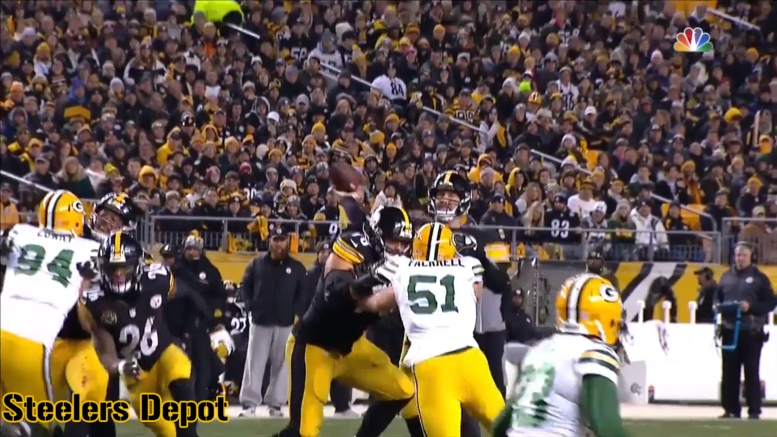 Even in a performance in which he threw two interceptions—one of which came off of a batted pass that was tipped into the air—the quarterback that fielded the Pittsburgh Steelers’ offense last night is continuing to play at another level compared to what we saw through much of the first two months of the season.

Were it not for the turnovers, it would be fair to call last night’s game the best of the season for quarterback Ben Roethlisberger, who completed 73.3 percent of his passes in spite of the fact that he had five or six drops to endure in the early stretch of the game.

In all, he completed 33 of 45 passes for 351 yards, averaging 7.8 yards per pass attempt, four of which ended up in the end zone. Aside from the aforementioned two interceptions, he also scrambled three times for 25 yards, two of which generated first downs. He was sacked once, a takedown that was pretty much on him.

Through 11 games, Roethlisberger has now completed 250 of 396 pass attempts, for a 63.1 completion percentage that is much more respectable than what he has been averaging for the majority of the season. He has thrown for 2948 yards now, and has gotten his yards per pass attempt up to 7.4. He has now thrown 20 touchdown passes to 12 interceptions.

In just the past two games alone, he has completed 63 of 90 pass attempts, or exactly 70 percent, for 750 yards, eight touchdowns, and two interceptions. I can’t imagine there are many who would turn down that two-game stat line, especially weighing in mind the fact that it includes at least seven or eight dropped passes.

But as I wrote about a week ago while talking about his performance against the Titans, it’s not even about the statistics. It’s about the throws. Over the course of the past two games, and as I wrote about on Twitter last night, Roethlisberger has been making some of the truly elite throws that were not connecting earlier in the season.

It helps when your primary target is Antonio Brown, the best wide receiver in football, who has caught five of Roethlisberger’s eight touchdowns over the course of the past two games. You can make all the amazing throws you want, but somebody has to finish them on the other end, and Brown almost always does just that.

But a receiver like Brown also needs a quarterback like Roethlisberger who can get the ball into those windows and give him the chance to make the fantastic plays that he does. The pair had at least three or four stellar connections just last night alone.

He was also making the throws to everybody else, even though they had a hard time catching some of them. And, last night at least, they did it without JuJu Smith-Schuster, who has become his second-most reliable target. The pass coverage might be suddenly suspect, but the pass offense is just getting started.