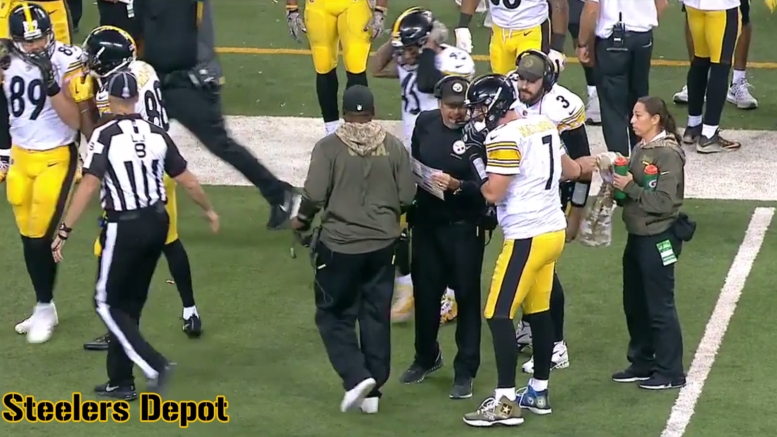 One of the primary responsibilities of being a quarterback—and arguably one of the most difficult to master—is becoming a leader. That is not something that Pittsburgh Steelers quarterback Ben Roethlisberger had right off the bat, but has developed over the years.

While it’s not a cudgel that he likes to wield, he steps up when he feels it is necessary, and one moment of necessity for him was at halftime last Thursday against the Titans. Following an impressive opening drive, during which they went right down the field and scored a touchdown, the offense struggled for the remainder of the first half.

By the time they got into the locker room, Roethlisberger felt the need to stand up and talk to the group, challenging them, and himself, to step it up in the second half. They came out of the locker room and scored touchdowns on their first three trips and 24 points overall.

“We didn’t make plays in the first half”, he told reporters recently about why he decided to open his mouth. “It starts with me; I didn’t make plays. Receivers, running backs, linemen—particularly they’ve played great, and I think even they’ll tell you they didn’t have their best first half either”.

While he said that he has probably done that before and it didn’t work out (“you don’t just give speeches and they work”), Roethlisberger said that he felt that “needed to regroup and I needed to say something”, which he did. This time, at least, it worked, and worked well.

But leadership takes many forms and is a continuum rather than a series of individual events. He has become a much better leader in managing his offense on the practice field, for example, to help ensure that they are on the same page and making progress, which he talked about a bit.

Asked what was most critical at this point of the season in trying to continue what they did in the second half against the Titans, he said it was about attention to detail. “We do a lot of individual work, we do a lot of team work. Just making sure everybody’s doing the same thing, and doing what they’re supposed to do”, he said. Whether that’s route depth, reads, breaking in or out, attention to detail at this time of year is huge”.

One thing that he wanted to do in that game against Dick LeBeau, whom he as a quarterback knows better than anybody else, was to use the no-huddle a bit, in part to try to slow down their blitzes—which in the end didn’t work too well, at least when they successfully blitzed.

Roethlisberger noted that the Packers are another team that likes to blitz a lot, with some opportunistic players on the back end—which is particularly the case if they get a couple of injured players back. With another game at home under the lights, it wouldn’t be surprising to see another healthy dose of the no huddle as a result.