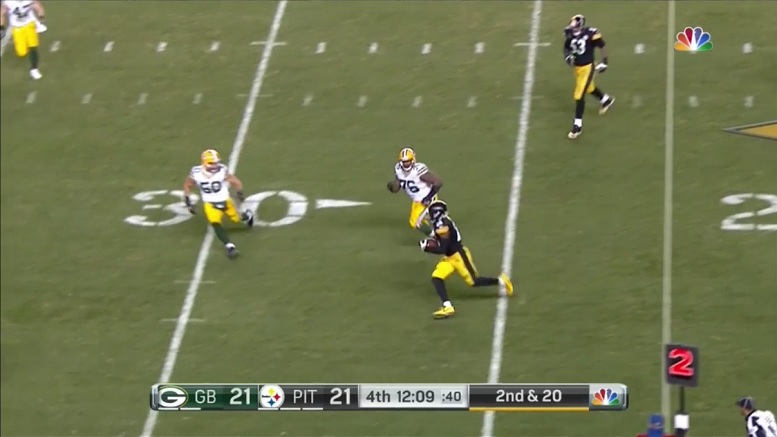 Pittsburgh Steelers wide receiver Antonio Brown certainly had a great game Sunday night in the team’s home win over the Green Bay Packers and that didn’t surprise quarterback Ben Roethlisberger one bit. Even so, while Brown led the team Sunday night in receiving yards with 169 on 10 receptions with two resulting in touchdowns, Roethlisberger made it clear after the game was over the running back Le’Veon Bell was just as huge of contributor to the passing game as Brown was.

“To me, the big story in the passing game was Le’Veon,” Roethlisberger said immediately after the game. “They [the Packers] were trying to get some depth and take away a lot of passes and Le’Veon, he just made play after play and bailed me out on a lot of check-downs when guys aren’t there. Getting out quick, making things happen. So, as great as A.B. always is, Le’Veon was extra special today, too.”

Bell had one of his best all-around games of the season Sunday night and included the running back setting yet another team record with his 12 receptions, the most ever by a Steelers running back in a single game since Franco Harris caught 11 in a 1982 game.

Bell’s 12 receptions Sunday night also resulted in total gains of 88 yards and according to our game charting, that’s exactly the number of yards he gained after catching the football and often that isn’t necessarily the case when it comes to that position.

Two of Bell’s 12 total receptions Sunday night also came on two separate second down plays during one single fourth quarter possession that included the offense needing 20 and 13 yards for a first down. Bell gained 14 and 12 yards on those two plays respectively and the offense then proceeded to convert both ensuing third downs. That drive also ultimately culminated in a touchdown.

With his 12 receptions Sunday night Bell now has 61 on the season. He now has five games remaining to break his own and the franchise’s single-season record of 83 and needs just 19 more receptions to become the Steelers most prolific receiving running back of all-time.