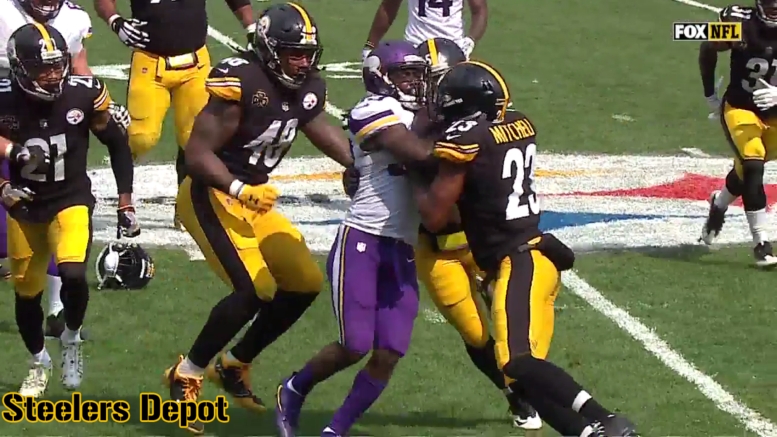 Mike Mitchell is the player you love to hate—or at least one of them. A lot of you seem to love to hate a lot of people, but Mitchell tends to be the most frequent target of late, if only because William Gay no longer sees the field frequently enough to draw as much ire as he once did.

He has, of course, been nowhere near as bad as he is frequently portrayed, but the truth is that he has not been particularly impactful on the season. He has no interceptions, no forced fumbles, and no fumble recoveries, nor sacks, and only two passes defensed. Generally, you want to get some sort of impact out of your free safety in terms of momentum-building plays. He has not delivered on that front.

But it wouldn’t be accurate to turn that into a conversation about him consistently playing poorly. A lack of big plays does not equate to an abundance of bad plays. I even attempted to write a slightly negative film room article about him and yet when people saw the plays, they defended him to me, so I don’t know what to say anymore.

He is a solid starter at worst when he is healthy. But he hasn’t been all that healthy, in spite of the fact that he has only missed one game, that coming this year. Other than the fact that he played through multiple groin tears his first year here, he hasn’t played this banged up since being in Pittsburgh.

Mitchell missed nearly all of training camp and the entirety of the preseason with a hamstring injury, and while he was able to make it back for the opener, they rotated him with J.J. Wilcox, a safety they had just acquired, in order to take some of the load off of him.

He later missed a game, and he is currently dealing with another lower body injury, which the team has described as an Achilles injury. He was limited in practice yesterday, so we will see what today’s injury report reveals. The Colts would seem to be a good opponent against which to deliver an impact play.