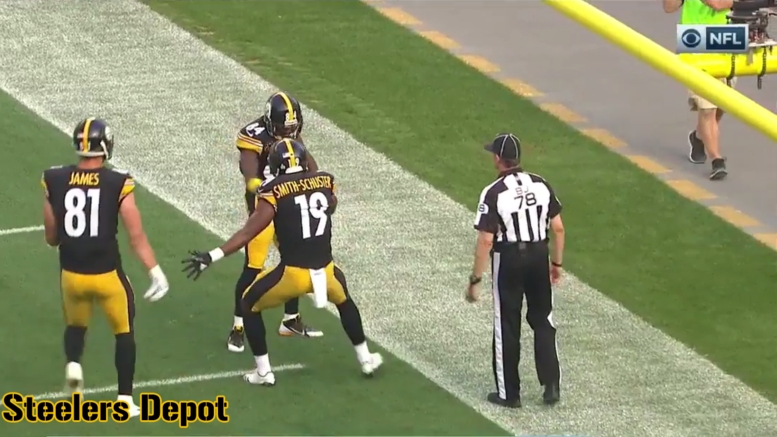 I wouldn’t quite put myself in the early spring camp that was vigorously against the idea of drafting a wide receiver early, even though I was pretty strong in my belief that outside linebacker and cornerback needed to come early. The Pittsburgh Steelers’ later acquisition of Joe Haden attests that they agreed.

But looking a couple of months into the regular season, I think almost everybody is reviewing the selection of JuJu Smith-Schuster—and the wide receiver position generally speaking—in a different light. I think it is fair to say that this was not as stable a group as many anticipated, including myself.

I was in the camp who thought that Sammie Coates was going to come back this year and look like the guy who was playing in the first five games of last season, or at least be close to it. I thought that Demarcus Ayers was doing to push Eli Rogers for playing time in the slot.

Once they drafted Smith-Schuster, I thought there was almost no chance that a free agent addition like Justin Hunter was going to even make the roster, at least provided that Martavis Bryant would be reinstated—of which he was already in the process by that point.

Antonio Brown on one side. Bryant on the other. Unstoppable duo, right? And that is before we even stick anybody in the slot, projecting major growth from both Rogers and Ayers in their second years of actual playing time.

And, wow, the team was so deep that rosterable players like Cobi Hamilton and Darrius Heyward-Bey would probably have to be on the outside looking in, because there is just too much talent ahead of them with guys like Coates and Ayers—and hey, Coates plays special teams, ya know.

Now, who do they have that they can rely upon, aside from Brown?

JuJu. And only JuJu.

Rely on Bryant right now? I hardly think so. Rogers? They’ve already benched him and he is still not seeing much playing time or targets. And his catch percentage did not keep up with where it was last season, as he and Ben Roethlisberger have missed on plays.

Hunter is a training camp phenom, not an NFL stadium one. Although he may have a chance to laugh in my face tomorrow. And bless your heart, Darrius, but there will be serious problems before you’re going to be considered for an integral role in the offense.

It’s AB and JuJu. Those are the guys. Back in May, many were wondering how the 20-year-old bicyclist would even be gotten onto the field. Now they really can’t afford to take him off.

In hindsight, or at the least, in retrospect, it was a very wise decision to pull the trigger on Smith-Schuster in the second round, and I’m finding it hard to entertain any arguments to the contrary. He’s already contributing significantly, and he is only getting started.