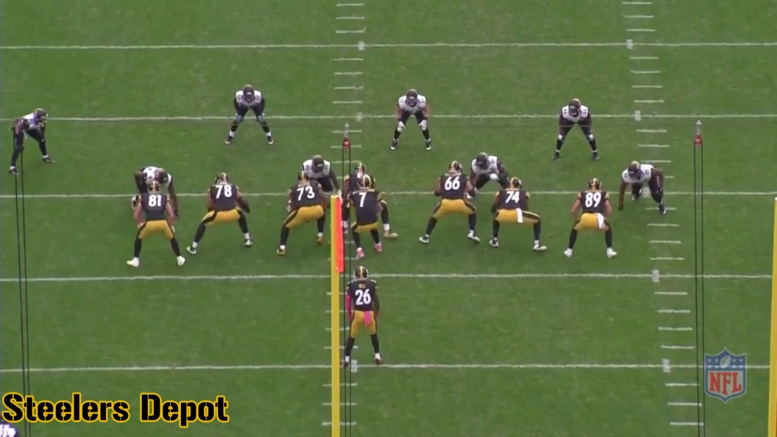 The Pittsburgh Steelers’ gameplan on offense against the Jaguars ended up being much different than what they were hoping to do, needless to say, because they quickly fell behind in the third quarter with a pair of pick sixes. After that, they turned exclusively to three-receiver sets, and mostly no-huddle, in a futile hope to get back into the game.

But there is an extremely stark contrast between the personnel packages that they ran through the first third of the down in comparison to the remaining 40 minutes, which began late in the second quarter in the two-minute offense.

Outside of the final three plays of the game, which were simply three carries to try to end their misery in a 30-9 defeat, the Steelers ran fifty-seven (57) consecutive plays out of the 11 personnel package, spanning from the beginning of their first possession under the two-minute warning in the second quarter through Ben Roethlisberger’s final interception.

Prior to that, they ran that personnel package just six times out of 21 plays run in the first quarter and into the first five minutes of the second quarter. They put on the running game personnel, to be sure, including seven snaps with just one receiver on the field.

But Roethlisberger and Mike Tomlin were right. The Jaguars were set up to stop the run. On those first 21 plays, the Jaguars had no fewer than eight players in the box on all but seven snaps, and many of those snaps featured the Steelers using run-heavy personnel in five-wide sets. On one snap, they bunched Le’Veon Bell, Jesse James, and Vance McDonald all together on the right side as receivers.

When looking at the actual numbers, it does make more sense why the Steelers didn’t run the ball more than they did, even early in the game. Six times they had nine players in the box. Four times they ran the ball. It worked the first time, gaining 10 yards, but then it was just four, and then minus-two, and then zero. So the next time they saw nine in the box, they threw, twice—the second being picked off.

The Jaguars had eight or more in the box 21 times in the game, all but five of those snaps coming in the first half. Discounting the three runs at the end of the game, they ran the ball seven out of 18 times facing a loaded box.

The rest of the snaps produced a false start, an interception, two throwaways, a batted pass, two additional incompletions, a scramble, and three completions—of 13, 15, and 49 yards. So that was something of a mixed bag.

Where Roethlisberger was successful was when he faced a six-man box. Outside of an interception—on which his wide receiver was tripped over the feet of the underneath coverage—and a sack, he completed 20 of 28 passes with one throwaway, though only for 157 yards. None of them failed to convert on third down, however, and 17 of the 20 completions were successful plays. A 28-yard touchdown pass was also taken away because of a hold.