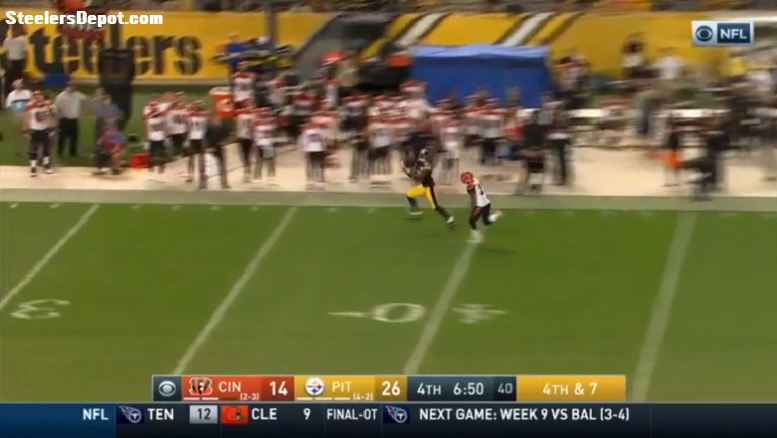 The Pittsburgh Steelers went into their bag of tricks in Sunday’s home win over the Cincinnati Bengals as they ran a fake punt in the fourth quarter and it worked perfectly.

With the Steelers ahead 26-14 with just under seven minutes remaining in the fourth quarter, the team faced a 4th down and 7 from their own 40-yard-line. Steelers safety Robert Golden, who plays the up-back position on the punt team, took a direct snap from long snapper Kameron Canaday and immediately threw a 25-yard pass down the right sideline to wide receiver Darrius Heyward-Bey, who plays the gunner spot. Heyward-Bey, who was left uncovered on the play by the Bengals return team, caught the pass in stride and gained 44 yards before he was finally run out of bounds.

The Steelers went on to kick a field goal after running three more plays inside the Bengals red zone and that increased their lead to 29-14 with 5:17 left in the game.

After the game was over, Steelers head coach Mike Tomlin was asked about the fake punt.

That was indeed Golden’s second completed pass of his career via a fake punt on Sunday. During the Steelers 2014 regular season opener against the Cleveland Browns, the Steelers safety completed a pass on a fake punt to then cornerback Antown Blake on a 4th and 10 play from the Steelers own 20-yard-line.