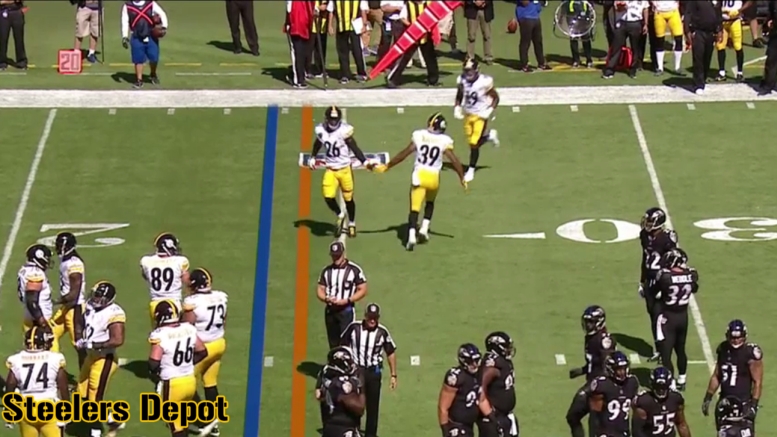 Despite the fact that running back Le’Veon Bell was the featured player for the Pittsburgh Steelers’ offense during yesterday’s game, he was not the only running back who got work. James Conner, in fact, saw a handful of snaps, and even got four carries, in part during a stint during which Bell was getting looked at on the sideline.

During one of the Steelers’ goal-line sessions, the offense was struggling in the seven shots drill. Through four shots, the defense was up 3-1, but Tomlin put Watson into the lineup and he converted for scores on three consecutive plays.

Similar to how Isaac ‘Red Zone’ Redman first drew attention to himself in Steelers camp several years back, that was the moment that many started taking note of Watson and of the potential that he could have.

Though he did actually spend a little bit of time on the Eagles’ 53-man roster last year, this is going to be his first accrued season, and he is already serving as one of the team’s primary kick returners and logging 15 to 20 snaps on special teams on a weekly basis.

Last week, he got the first snap of the season on offense outside of the victory formation, checking in for the carry as Bell checked out for third and one, and they gave him the ball. He converted with a three-yard gain.

Yesterday, on the Steelers’ opening drive, in fact, they got into a third and one situation, right after Bell ran off a nine-yard run, and Watson checked in again. He converted, again, plowing up the gut for the one yard needed for a new set of downs.

The big back has two carries on the season for four yards, but context shows that both of them were successful plays for the offense. And one wonders if he isn’t going to carve out a niche for himself in this short-yardage role.

Though there is evidence to the contrary, of course. Over the course of the past three games, the Steelers have had first or second and goal from the one-yard line. Bell has stayed in for those snaps and scored all three times. He also was given the ball on third and four late in the game and converted.

But after two successful cameos, Watson is putting his name out there as an option, and that is all you can ask of your third-string running back.