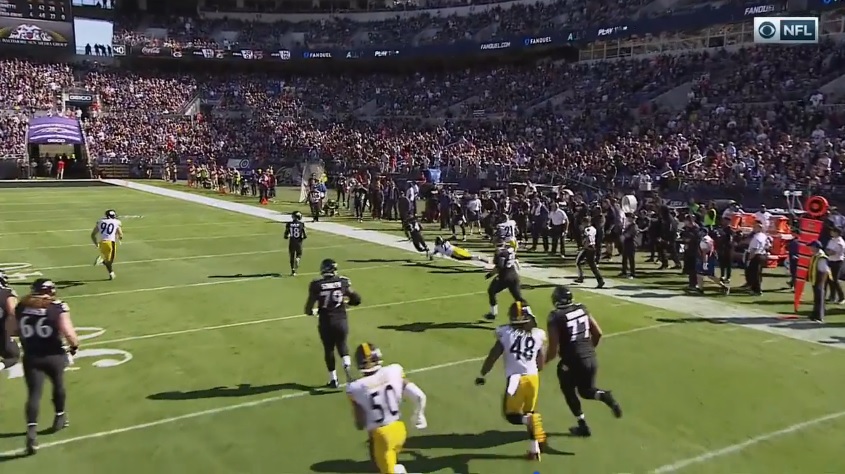 One quick play I wanted to share with you guys tonight. T.J. Watt returned to the lineup after missing time with a groin injury and wound up playing all but two snaps in Sunday’s win over the Baltimore Ravens. His impact wasn’t huge on the box score but I thought it was a strong performance. Highlighted by this hustle play that probably saved a touchdown.

Alex Collins ripped off a 50 yard run in the third quarter. But it could’ve been worse. Watt, chasing the play from the backside, chased Collins downfield and forced him to cutback downfield. It slowed the back up enough for help to arrive, Joe Haden chasing him down. Take a look. He’s to the backside of this run, the one who leaps over the tight end.

Ultimately, the Ravens still found the end zone on this drive, Joe Flacco hitting Mike Wallace a couple plays later. But you have to admire Watt’s effort and football IQ, taking the proper angle to the football to meet Collins downfield. On this play, it saved the score.

Watt’s hustle and conditioning were arguably the two most noticeable traits about his game during training camp. That, of course, comes from a football family, leaning on his older brothers to know how to train and how to take care of himself.

He’s had a strong start to his career and has sent James Harrison onto the bench and in street clothes. With plays like this, along with the pressure he’s generated as a pass rusher, he’ll continue to play almost 100% of the snaps.