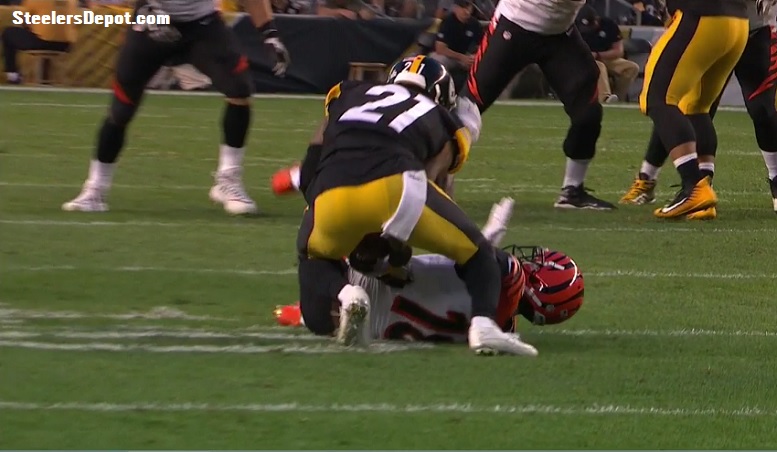 The Pittsburgh Steelers started out their Week 7 game against the Cincinnati Bengals with an impressive opening drive that resulted in a 7-yard touchdown pass from quarterback Ben Roethlisberger to wide receiver Antonio Brown. While the two teams then proceeded to trade a few scores the rest of the first half, the Steelers managed to go into halftime with a 20-14 at half time. In the second half, however, the Steelers defense made their mark in the game on their way to dominating the Bengals offense during the final 30 minutes of play.

With the Bengals receiving the ball first in the second half, they were only a touchdown away from taking their first lead of the game, this is where the Steelers defense began their dominance as they forced a quick three and out. On third down of the opening second half drive, rookie outside linebacker T.J. Watt was able to get disruptive pressure up the middle which forced Bengals quarterback Andy Dalton out of the pocket and inside linebacker Ryan Shazier was able to secure the tackle just short of the first down marker.

On the following defensive possession, the Steelers, now ahead 23-14, were able to build on their success and get their first turnover of the game as cornerback Joe Haden was able intercept Dalton on a short slant pass intended for wide receiver A.J. Green. Dalton was successful in getting the ball right over top of Watt’s underneath coverage but the ball was off target and Green was only able to get one hand on it causing a deflection.  Haden was closing in and ultimately able to scoop the ball right off the back of Green and secure his first interception in a Steelers uniform.

The Steelers increased their lead to 26-14 with another Chris Boswell field goal following that interception. This brings us to the Bengals third offensive possession of the second half which was another impressive one for the Steelers defense. That Bengals possession started off with a Dalton check down to rookie running back Joe Mixon to the flat. Torpedoing in from the secondary came Steelers safety Sean Davis to deliver a big hit that caused a fumble which Mixon was able to recover. Following that play, Dalton attempted a deep shot down the right sideline to speedster wide receiver Cody Core but he was forced out of bounds by Haden, who was stride for stride in coverage. Then, on third down, the Steelers intercepted their second pass in three possessions as Davis made a break on a ball intended for Bengals wide receiver Josh Malone and deflected the pass in the air for cornerback William Gay to intercept.

In a span of three possessions, the Bengals opened the second half with a three and out and two interceptions and the lead for the Steelers grew to 26-14.  This was a huge part of the game as the Steelers were in total control heading into the fourth quarter.  The Bengals were never able to get their offense going as they did not have an answer for the Steelers pass rush. By the end of the game, Dalton had been intercepted two times and sacked four times leading to a dismal 36 yards passing in the second half.

The Steelers advanced to 5-2 on the season with their Sunday win and grew their division lead in the process as the Baltimore Ravens and Cleveland Browns both lost on Sunday as well.  The Steelers will now go back on the road next week to face off against the Detroit Lions on Sunday Night Football.  The Lions had their bye week in Week 7 and will are coming off a 52-38 loss in Week 6 to the New Orleans Saints.