The Pittsburgh Steelers Sunday home game against the Jacksonville Jaguars could feature something that we haven’t seen happen in quite a while.

Assuming tackle Marcus Gilbert and safety Mike Mitchell ultimately wind up playing Sunday against the Jaguars, we just might get to see all intended 22 starters play in one game together for the first time in at least several seasons.

The Steelers were real close to accomplishing that feat in Week 1 but outside linebacker Bud Dupree ultimately missed the opener against the Cleveland Browns with a shoulder injury. While Dupree was back in Week 2, defensive end Stephon Tuitt then proceeded to miss not only that game, but the Week 3 game as well with a biceps injury along with Gilbert, who has been dealing with a hamstring injury. This past Sunday, two intended starters, Gilbert and Mitchell, sat out the game against the Baltimore Ravens.

So, when exactly was the last time the Steelers had all 22 intended starters on the field during one game? Well, we know it didn’t happen last season thanks to injuries suffered by Dupree and defensive end Cameron Heyward. We certainly know the all-22 feat wasn’t accomplished in 2015 as center Maurkice Pouncey missed the entire season with a leg injury.

Well, if you go back to the 2014 Week 2 game against the Baltimore Ravens, you’ll see the game day 53-man roster for that contest below. My, a lot sure has changed since then, but even so, that might officially be the last time all 22 intended starters played in a regular season game together. Sure, Cam Thomas can be questioned, but he was a starter during the preseason and holding a spot until Tuitt was ready. Brett Keisel wasn’t re-signed until late in August that year and didn’t actually start until much later in the season.

Keep your fingers crossed that we’ll get treated to this huge feat on Sunday. 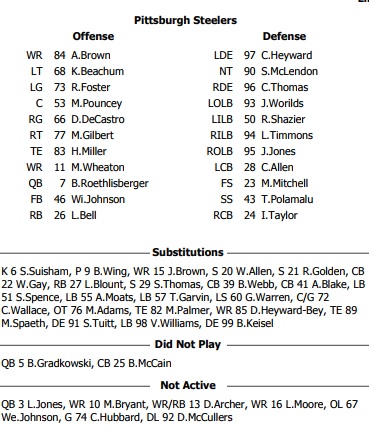