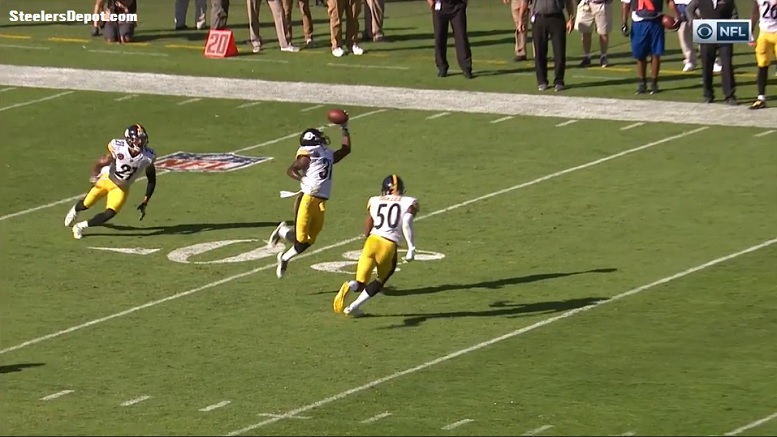 In a game that the Pittsburgh Steelers led from start to finish in their Sunday win over the Baltimore Ravens there was never an exact moment that changed the course of the game from one side to the other.  The Steelers controlled the game and the time of possession for much of the first half while the Ravens came out much stronger in the second half and made their push towards getting back into the game.

A major turning point in the game would also end up being the play that ultimately sealed the victory for the Steelers as cornerback Mike Hilton was able to cap off his stellar day with a game clinching interception.  With just under 6 minutes remaining in the game, linebacker Ryan Shazier showed us his tremendous athletic ability by leaping high into the air to tip a Joe Flacco pass intended for Ravens wide receiver Michael Campanaro up the right seam. Hilton, as he was much of the day, seemed to be in the right place at the right time as the ball deflected directly to him.  He secured the interception before falling to the ground after a brief return to all but secure the win.

The interception came at a crucial moment as the momentum had been swinging in the Ravens’ direction. The game was looking like it was heading towards an all too familiar dramatic ending that we have come to expect in a Steelers-Ravens game.  To put it simply, things were not going the Steelers way in the second half.  A very controversial call that turned a would-be Antonio Brown catch into an Eric Weddle interception deep in Steelers territory was just the beginning. The Steelers defense would hold up strong only yielding a field goal to the Ravens after the turnover.  Furthermore, a missed field goal by Steelers kicker Chris Boswell led to good field position and a touchdown reception by former Steeler and current Ravens wide receiver Mike Wallace which shrunk the lead to 10 points.  Two late interceptions by Shazier and Hilton put ends to late drives where the Ravens could not afford to come up empty.

Shazier will get the much-deserved assist in the stat book but we need to give credit to the Steelers pass rush as well. Defensive end Cameron Heyward led the pass rush all day in getting pressure on Flacco and made sure to close out the game strong on this play as well.  The throw from Flacco was rushed a bit as the Steelers four-man rush was able to get just enough pressure to affect his timing as he was not able to read the linebackers dropping into a deep zone.

The interception was Hilton’s first of his career which capped a day where he also secured his first career sack.  So far in Hilton’s short career with the Steelers he seems to have a knack for being in the right place at the right time.  He often finds himself around the ball and has capitalized on opportunities as they have come his way.  This trait has been a big part of his training camp success and ascendance from the 2016 practice squad to a highly active member of the 53-man roster in 2017.  After the first three quarters on Sunday, if there was anyone on the Steelers defense who deserved a “gimme” interception it was Hilton.

The Steelers get a big win on the road in Baltimore for the first time in five seasons and take sole possession of first place in the AFC North at 3-1.  The Steelers will host the Jacksonville Jaguars at Heinz Field next week at 1 pm EST.