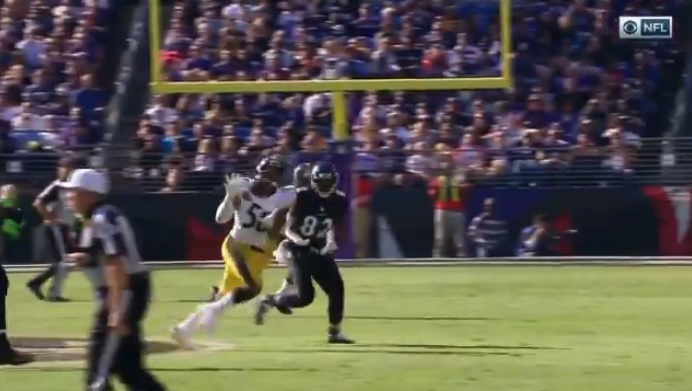 Beating the Baltimore Ravens and it feels so good. Recapping the Pittsburgh Steelers’ winners/losers.

Le’Veon Bell – Bell looked like the guy we’ve always known. His 186 yards from scrimmage is a career high against the Ravens’ physical defense. Credit to blocking who helped open things up but Bell ran with burst, physicality, and his trademark patience. That’ll make him, and fans, feel a whole lot better moving forward.

Mike Hilton – Hilton’s coming out party. He’s been the full-time slot receiver since Week Two but today was his best game. Three tackles, a sack, and a pick. Coaching staff identified the talent last year and it’s paid off.

Ryan Shazier – Shazier can be hit and miss but today was much more of the former. While the Ravens were able to rip off a couple nice runs, Shazier was a constant backfield headache. Tackling much cleaner after missing a team-high four in last week’s debacle. He had another INT, which was a fantastic play we’re breaking down in the morning, and his tip created Hilton’s pick. Great day.

JuJu Smith-Schuster – Eli Rogers is going to have a tough time getting a helmet again. It feels like JuJu has better chemistry with Roethlisberger than Rogers has ever shown on a consistent basis. Everything is on time and Smith-Schuster has shown the ability to work well in scramble drills. He’s also quick to the tuck and gets upfield, a crucial trait for a slot receiver.

Involved in the blocking game again, he decelerated an OLB on Bell’s first TD. Lot of fun to watch. With some sweet celebrations, too.

Sean Davis – The first play may have been his worst, it looks like he was in the wrong on the big run to start things, but Davis was steady the rest of the way. Doing a better job of coming to balance as a tackler while still dishing out a blow. Five tackles, a pass breakup, and the Ravens didn’t get the chance to go over the top in the passing game.

Cam Heyward – Heyward feasted on LG James Hurst, a man who surely hates playing against the Steelers. A pair of sacks and a forced fumble is definitely the right way to bounce back from last week’s loss. He’s still the anchor of that defensive line.

TJ Watt – Watt wasn’t as dominate as some of the other names on this list but it was good to have him back. He was impressive in coverage, forcing one third down incompletion, played the run well, and check out his effort on the 50 yard run Baltimore ripped off. Chased it from the farside and ended up making the tackle.

Ramon Foster – First, for not being penalized, the only starting linemen who can state that claim. But he blocked well too, being used as the backside puller just as often as David DeCastro to leas the way for Bell, including on his first TD. Foster pulled back-to-back plays. As steady as they come and today proved it.

OL Penalties – It’s hard to put a blanket statement to the offensive line for everything.  DeCastro and Foster created running lanes. But the penalties were frequent and costly. Six in total with Chris Hubbard and DeCastro being flagged twice. Alejandro Villanueva’s headbutt was idiotic and uncharacteristic. Also…probably painful.

They doubled the number of penalties from the first three weeks in one game.

JJ Wilcox – Wilcox wasn’t terrible but man, his ability to fill the alley is ugly. Got stiff-armed by Alex Collins on a 50 yard run one week after getting stiff-armed by Jordan Howard on a similar play. He’ll throw his weight around but you want to talk about some bad angles…Wilcox has struggled. Finished the day with a pair of tackles.

Chris Boswell/Jordan Berry – Not the best day for the specialists. Boswell booted one from 49 yards out but hooked a 44 yarder wide left. Berry averaged 37.5 yards per punt, only one of those falling inside the 20. Better days ahead for those two.

Vance McDonald – He seemed to do a decent job as a blocker but had another drop, a particularly bad one too, and still hasn’t caught a pass all year. One was negated by a DeCastro hold.