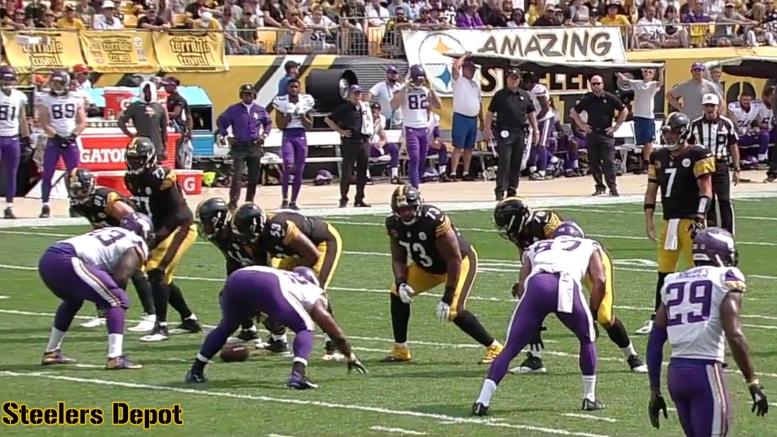 Back at it on gameday, breaking down what the Pittsburgh Steelers have to do to win (or lose) in today’s game against the Baltimore Ravens My always unreliable prediction at the bottom.

– They have their best running game of the year. A normally strong Ravens’ run defense has shown cracks, especially without beefy nose tackle Brandon Williams. Their run defense is in the bottom third in the league. And Pittsburgh has had recent success on the ground; Le’Veon Bell tore them up for 122 last year. Pittsburgh’s run game has gotten marginally better each week with their best effort in the loss to Chicago. Sure would take some of the responsibility off Ben Roethlisberger, who is off to an equally difficult start.

– They don’t fall for playaction. That’s the Ravens’ ticket to creating something through the air, where they’ve been as stagnant as nearly any team in the NFL (fewest yards per game, lowest yards per attempt). Joe Flacco and company like to use boots and half rolls to have their receivers leverage defenders into the flat. They still run those Y crossers the Steelers have been hurt by in the past. If Pittsburgh can be patient and not bite the way they did on, say, Adam Shaheen’s TD last week, they’ll nullify the Ravens’ best asset.

– Baltimore’s special teams win the day. Which definitely could happen. They have the two best at their position. There’s kicker Justin Tucker, who can boot one to Jupiter. And there’s Sam Koch, who could land a punt on the “T” Hollywood Henderson said Terry Bradshaw couldn’t spell.

So the Ravens will be able to end drives in field goals most teams wouldn’t be able to do and they can flip the field like others can’t (and quite often, get positive field position themselves on the ensuing drive). That helps out a floundering offense. Not a lot you can do to stop them, either.

– Roethlisberger keeps struggling with man coverage. Because the Ravens are going to run a lot of it and as we’ve broken down recently, that’s where his biggest issues are at. Cover 0, 2 Man, Cover 1 are his lowest completion percentages. He’s got to be better if the Steelers want to win. On the road, where they haven’t for four years, it’s an issue.

– Keith Butler doesn’t respond well to pre-snap motion. The Ravens will shift and trade their tight end a lot pre-snap, changing where the strength of the formation is. It wasn’t the sole issue last week against Chicago but I think that was part of the problem. They’ll be tested again and if they can’t make changes and the run game struggles again, Butler will be on thin ice.

– The Ravens move the ball the best way they know how. The ‘ol pass interference offense which, full disclosure, the Steelers have certainly borrowed this year. There’s still some speed on this team with Mike Wallace, even if he’s been invisible. You know he’s amped up for this week. Artie Burns has to watch his back. Three penalties this season.