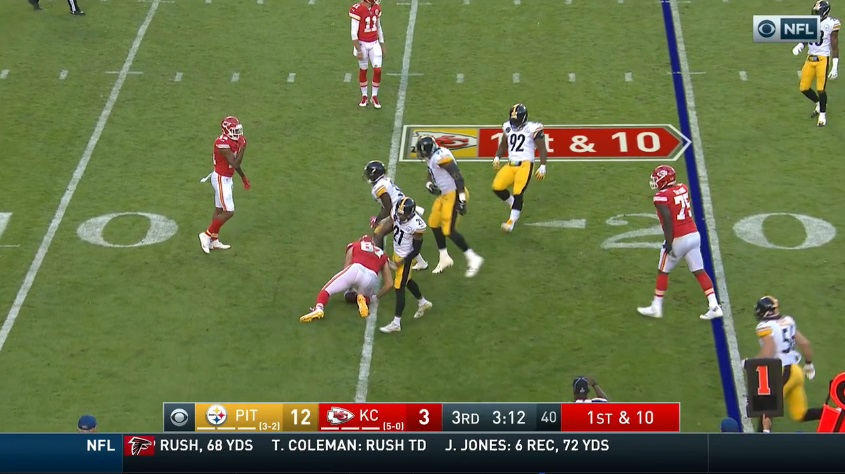 The Pittsburgh Steelers with a big win. Feels good to say that again. Drinks on me.

Mike Hilton: Hilton isn’t the sexiest name on this list but man, what a game from 31. His run defense has been excellent and he chipped in two TFLs, including a one-handed takedown of Travis Kelce. His tackling has been consistently excellent and his blitz off the edge, aided by his ability to time it, bailed out an Artie Burns’ meltdown.

Antonio Brown: What a player. What a play. Sure, there was luck on his tip-drill touchdown. But it also took incredible concretion. Years on the JUGS machine pays off on a play like that. Eight catches, 155 yards, and that score.

Le’Veon Bell: Bell was consistently excellent. He took advantage of what was blocked but more importantly, created his own room when there wasn’t any, the hallmark of a great running back. Averaged 5.8 yards per carry on 32 touches.

Ben Roethlisberger: I know the box score doesn’t paint this as his best game ever. And it wasn’t. But it was his best game of the year. No mistakes, the INT was Brown’s fault, and he got the deep ball working. Still can be better, and will likely be required later in the season, but a great turnaround after last week.

David DeCastro: Gotta show the offensive line some love. Shoutout to Chris Hubbard for having maybe his best game filling in for Marcus Gilbert, who left during the game, but DeCastro seemed particularly excellent. Maurkice Pouncey too. Bell easily got into the second level, especially in the first half.

Vince Williams: Two sacks on the game, making him the team-leader. He ran over Kareem Hunt on both snaps, though Hunt saved face with a stiff-arm in the second half. It’s a shame he left the game with an injury but when he was out there, played like his physical self. Needed in a game like today.

Sean Davis: Not the loudest performance today but he was really good coming off a pretty awful game vs Jacksonville. Big open field tackles and his 4th down breakup on TE Demetrius Harris was one you shouldn’t forget about. Rose to the moment. Gotta love it.

Stephon Tuitt: Wrote this morning Tuitt needed to have a strong game against Cam Erving. He certainly didn’t disappoint. Got pressure early and often. His impact goes far beyond the box score, where he finished with just two tackles.

Roosevelt Nix: Finally, some love to Rosie. Cracking skulls in the run game. Like Vince Williams, he helped bring the physicality on the offense.

James Harrison: Gotta give the man credit. Mike Tomlin asked if he still had it. Answer? Hell yes.

Danny Smith/Jordan Berry: Tied to the hip. Breakdown on punt coverage late in the game and the kick return after the safety was a hot mess. Berry’s punts were of the JV variety, though he did have a big boom on his last one. As has been his issue for parts of his career, consistency has been the biggest problem.

Artie Burns: Burns did make some really strong plays on third down. But his gaffes were inexcusable. Lost his man on the Chiefs’ touchdown and should’ve gave up another. Like I wrote earlier, got bailed out by Hilton pressure that forced an errant throw.

Mike Mitchell: I’m sure he did some good things to help tamp down the Chiefs’ passing attack early on but the missed sack/facemask/late hit is the worst combo in history. Unless he really did get tripped on that low hit on Smith, that’s something that really could be a suspensionable offense.

You know I generally defend the guy but today? Not smart football.

Bud Dupree: Another quiet game from him. Just one tackle. Worked against the same Eric Fisher as Deebo did. (Edit Note: Screwed this one up, Dupree worked on RT Mitchell Schwartz. So he’ll get a pass this week.)