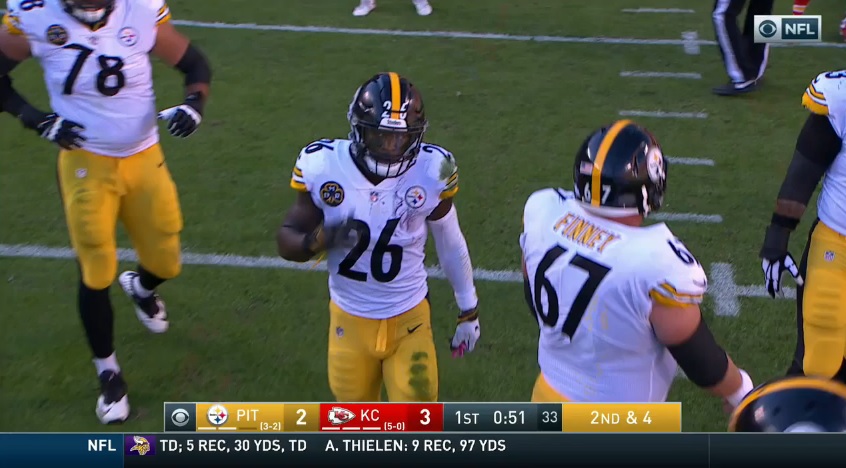 It took a little luck late in the game offensively and an old, familiar face defensively, but the Pittsburgh Steelers were able to pull off a convincing 19-13 win Sunday afternoon in Kansas City at Arrowhead Stadium over the previously undefeated Chiefs, putting the Steelers back on track at 4-2 nearly halfway through the year.

Le’Veon Bell and Antonio Brown dominated once again, while a young, fast defense put together its best game of the season to get the hype train rolling in the right direction once again.

Like I do every week following the game, I’ll take a shot at trying to grade each position group.

Sunday’s performance from Ben Roethlisberger was much, much better from the previous week. Although he wasn’t the gunslinger he describes himself as, Roethlisberger was a good game manager that got away with some much-needed luck late in the game, leading the Steelers to victory.

Make no mistake about it:  the touchdown to Brown late in the fourth quarter was an ill-advised play-call and a bad decision to throw it into double coverage. Phillip Gaines probably didn’t sleep well Sunday night knowing he left a possible game-turning interception go through his hands and bounce off of his helmet for a Steelers touchdown, but you have to take it any way you can if you’re Pittsburgh.

I liked that the Steelers really didn’t take any deep shots in this game, allowing the receivers to work in the middle of the field in man coverage, which Roethlisberger isn’t typically great at. But it worked on Sunday as the veteran finished 17-for-25 for 252 yards, one touchdown and one interception in the game, which was a miscommunication between Ben and Brown.

Just five of his 17 completions were on or behind the line of scrimmage in the win.

As I’ve been trying to say for the last 2-3 years, this Pittsburgh team goes as Le’Veon Bell goes, and Sunday’s dominant performance on the road in Kansas City Sunday proved that once again.

Right from the opening drive it was clear Bell was in for a huge game, and he certainly delivered big-time, rushing for 179 yards and a touchdown on 32 carries, adding three catches for 12 yards in the win.

At some point the Steelers might have to lighten the load on Bell if they want him fresh for the playoffs, but man alive he gets better and better as the touches mount up.

This was a vintage Bell performance on the big stage when the team needed him most. It’s so fun to see him deliver performances like these.

Behind Bell, rookie James Conner touched the ball two times on the ground for 14 yards, running hard and decisively on each run, while short-yardage back Terrell Watson picked up a first down on the opening drive on his lone carry of the game, which I believe leaves him perfect on short-yardage situations this season.

Without Brown’s heroics on 3rd and 2 with just over four minutes to go in the fourth quarter, who knows what the mood in the Steelers’ fan base is like Monday morning, afternoon and evening.

But once again, big-time players make big-time plays in big-time games and that’s what AB did all day long on Sunday. I’m convinced there’s not a single cornerback in the NFL over the last 15-20 years who can consistently check AB in man coverage.

Aside from AB, Martavis Bryant hauled in just two passes for 27 yards, one of which was a nice looking 20-yard catch over the middle of the field, which was a change of pace from his previous catches this season of the bubble screen and drag routes.

I think if we’re being fair, JuJu Smith-Schuster is the clear No. 2 receiver on this team. Roethlisberger obviously trusts him in big spots, and the rookie usually delivers. He did Sunday again, hauling in all three targets for 32 yards in the win.

Welcome to the party, Vance McDonald.

Known more for his outstanding blocking ability this season, McDonald had yet to get going in the passing game, mainly due to drops and misfires from Roethlisberger.

Both McDonald and Jesse James turned in strong performances as blockers in the run game as well, as both James and McDonald were used as extra pulling blockers at times, opening up creases for Bell to dance through for big gains on the day.

With left guard Ramon Foster sitting out Sunday’s game and right tackle Marcus Gilbert leaving just one series into the game with another hamstring injury, the Steelers were down two of their starting five offensive linemen on the road in a hostile environment, but it simply didn’t matter.

BJ Finney was superb in Foster’s place, serving as a road grader in the run game. He did have a big holding call wipe out a long Bell run, but overall he was terrific in this game, pulling left and right to get out in front of Bell.

Same with Maurkice Pouncey and David DeCastro. On first watch, this might have been one of DeCastro’s better games since signing that massive contract extension two summers ago.

Alejandro Villanueva did allow a sack in the first half to Dee Ford, but from then on AV did a good job of walling off the speed rushes of Ford, while Chris Hubbard more than held his own at right tackle in place of Gilbert, slowing down Justin Houston all game long.

When this unit is firing on all cylinders, I’m not sure there’s an offensive line that can slow them down for long stretches of games.

Against a strong KC offensive line, the trio of Stephon Tuitt, Javon Hargrave and Cam Heyward lived in the backfield against the run despite combining for four total tackles.

As Tuitt and Heyward got push up the field from the outside, Hargrave stood up the Chiefs’ center for much of the game, allowing the linebackers to flow freely, playing a major part in holding standout back Kareem Hunt to just 21 rushing yards in the win.

In fact, KC rushed for just 28 yards as a team, nearly 130 yards below their weekly average. That’s a major credit to the defensive line in this one.

Here’s hoping Vince Williams recovers quickly because VW was a monster on Sunday. Early in the year he’s caught a lot of unnecessary flak as a run defender, but on Sunday he was technically sound, filling the right gaps and making big stops in the hole. But his most impressive highlights were of him bulldozing over Hunt for two sacks late in the first half, sending the Steelers into the break with a 12-3 lead.

Williams was stiff-armed in the open field in the second half by Hunt for a big gain before going down with the hip injury, but more often than not VW was in the right place at the right time to make plays.

With Williams flying around, Ryan Shazier was quiet for the most part, finishing with just four tackles, but he did have two pass breakups, including the final one on KC’s last drive on 4th and 18 over the middle, sealing the win on the road.

Tyler Matakevich did come on in relief for Williams and had himself a nice game, recording four tackles in limited action as he continues to be a tackling machine when on the field.

TJ Watt and Bud Dupree combined for just two tackles in the win, but both provided consistent pressure for stretches in the game, including Dupree who seemed to have more energy playing the run than last week against Jacksonville.

But the story of the linebacking unit is James Harrison this week as the veteran finally got a helmet this season. He delivered in a big way, sacking Alex Smith on 3rd and 10 on the Chiefs’ final drive, setting up the 4th and 18 tip for Shazier.

When you look up Eric Fisher on Wikipedia, Deebo pops up as one of his parents. Kidding, of course. But seriously, someone get on that. Deebo OWNS Fisher.

In limited action at right outside linebacker, Harrison recorded three tackles, one sack and two quarterback hits. Expect him to get a helmet again next week and to be on the field late in the game in a big situation if the afternoon game with the Cincinnati Bengals is as close as this one was.

I know that Mike Mitchell and Sean Davis are an easy safety tandem to be negative towards with the way this team is built, but the safety duo turned in a good performance Sunday.

Davis led the Steelers with eight total tackles and even broke up a touchdown late to Demetrius Harris, ripping the ball away in the end zone to force a KC field goal. Mitchell took a stupid, dirty roughing the passer penalty in the second half on a long pass play to Hunt, diving at the back of Smith’s legs well after the pass was gone, but for the most part Mitchell was solid, providing the physical presence to the secondary.

At corner, Artie Burns had a mental error on DeAnthony Thomas’ long touchdown to get the Chiefs back into the game, but overall the second-year corner turned in a good performance, recording two pass breakups in the win.

Mike Hilton might honestly be the best corner on this roster, and he’s shown that week after week. Against the Chiefs, Hilton was all over the field in coverage as well as blitzing off the edge, finishing with five tackles, two tackles for a loss and a quarterback hit.

Joe Haden finished with three tackles defensively and nearly had an interception in the first half that would have been his first as a Steeler.

Chris Boswell nailed his only field goal attempt of the game — a 24-yarder — and hit both extra points, while punter Jordan Berry averaged 41.4 yards per punt on five tries, downing two inside the 20-yard line, but this grade drops entirely for the return game.

AB and Smith-Schuster botched the free kick following the Steelers’ safety, allowing the Chiefs to jump on the loose ball, and setting up a KC field goal to take a 3-2 lead. That simply can’t happen in the NFL. Brown also nearly muffed a punt before falling on it inside his own 10-yard line.

Right now, the Steelers simply don’t have a return threat that can change a game, ironically like a Tyreek Hill.