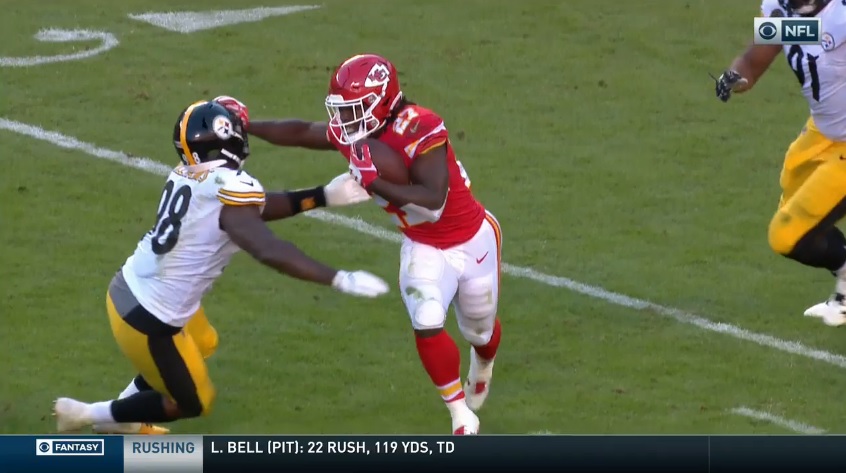 Another week comes with another strong performance in the tackling department for the Pittsburgh Steelers’ defense, which continues to improve week after week.

One week after the Jacksonville Jaguars ran all over them at Heinz Field, the Steelers went on the road to face the Kansas City Chiefs and their prolific rushing attack. Unlike the Jaguars game, the Steelers shut down the run game, swarming to the football to keep Kareem Hunt in check.

Like I do every week, I’ll take a look at missed tackles in the game. This week, it’s another good performance, for the most part.

Once again, Ryan Shazier leads the Steelers in missed tackles. Fifteen missed tackles in six weeks seem like a lot, but he’s consistently around the football making plays. As of now, the missed tackles issues with him seems to be something that needs to be taken for what it is, considering the number of plays he makes on a week-to-week basis.

Stephon Tuitt was very disruptive on Sunday in Kansas City, but he needs to become better at making stops in space, which is where his misses came on Sunday, namely on the first Chiefs play of the game.

Mike Hilton was a monster on Sunday, so I’m not overly worried about his two missed tackles, even if one of them was on DeAnthony Thomas’ touchdown, as was Artie Burns’. Hilton tackled Travis Kelce with one arm behind the line of scrimmage on Sunday. I can live with a couple of misses when he does things like that.

One area of concern could be TJ Watt missing five tackles in six games. The key word there is “could.” He’s been a good player this season for the Steelers, but I’d like to see him clean up some run stops, much like I would like to see that from Shazier and Vince Williams. Take the bad with the clear good with that trio.

Now, let’s get to the misses.

On the Chiefs’ first play of the game, a run for Hunt, Tuitt does a great job knifing into the backfield, but he fails to make the stop on Hunt. Granted, Hunt is an elusive back, but considering the speed at which Tuitt gets into the backfield, this should have been a clear tackle for loss for Tuitt.

After Tuitt misses, Watt has a chance to clean things up behind the line, but the rookie dives at Hunt’s ankles, missing in the process. Fortunately for both Tuitt and Watt, the Steelers swarmed to the ball on this play, stopping Hunt for just a 1-yard gain on the play in a sign of things to come for the Chiefs on the ground.

Much like the first play in this breakdown, Tuitt has a shot at Hunt behind the line of scrimmage, but the big defensive end misses again. Prior to the miss, Tuitt does a great job of stacking and shedding the Kansas City offensive lineman, finding the ball quickly. For as big and as powerful as Tuitt is, he needs to bring his legs with him when going for tackles.

After Tuitt misses near the line, Joe Haden comes up in run support looking to clean up the play, but Hunt is able to slip out of his low tackle attempt. Fortunately for Haden, he slows Hunt down and directs him right into Cam Heyward for the stop, which is all you can ask for if you’re going to miss a tackle.

The Steelers did a great job of flying to the football on Sunday, tackling as a team to help reign in a standout running back one week after being gashed at home by the Jaguars.

You’ve all seen this play by now, considering Williams ran over Hunt twice to end the first half for sacks. Hunt certainly gets him back here on this play.

Following a short dump-off by Alex Smith to Hunt over the middle, Williams has a chance to bring him down for a short gain, but Williams goes high on Hunt, who is a deceptively strong back. Williams found that out the hard way, getting planted by a stiff-arm.

Don’t expect that to ever happen again with Williams. He played a terrific game on Sunday before leaving with a hip injury; this missed tackle doesn’t change the perception of his game against the Chiefs for me.

Overall, the Steelers are doing a better of tackling in space, which was a serious problem last season. The key to that might be the gang-tackling mentality the defense has seemingly adopted this season. When they fly around with the speed they have and all get to the ball, it makes it hard for ball carriers to bust off big plays thanks to missed tackles.