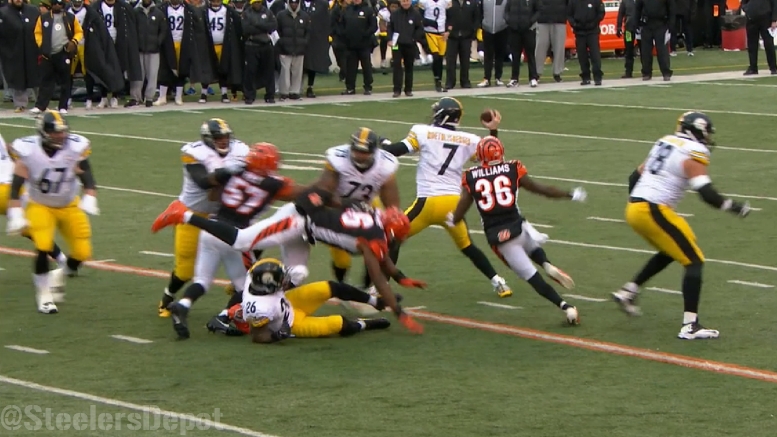 Back at it on gameday, breaking down what the Pittsburgh Steelers have to do to win (or lose) in today’s game against the Cincinnati Bengals. My always unreliable prediction at the bottom.

– They run their 22 Double to daylight. Run the ball effectively. Kind of an obvious point. But it’s been a tried and true method to the Steelers have used to control the clock and beat up on the Bengals over the years. Cincinnati knows it’s coming. But can they stop it? On paper, the Steelers still look like they have the upper hand.

– A.J. Green is bracketed and slowed down. Keep in mind, not to stop him, because that’s really tough to do, but to keep a lid on things. They’re force-feeding him the football as the only consistent weapon in the passing game and with good reason. He’s a top five receiver. That’s how the Steelers controlled the first matchup last year, Ross Cockrell (and safety help over the top) keeping Green in check.

– The Bengals’ return game gets stuck. Talked a lot about the Kansas City Chiefs’ return threat last week. Bengals are nearly on that same level. They have a great one in Alex Erickson, one of the few guys in the league capable of doing kicks and punts (they’re two different skillsets). Can’t let him bust a big return, as he did last year, one where a Chris Boswell shoestring tackle was required to save six.

– Ben Roethlisberger struggles vs the Bengals’ disguises. That’s certainly been an area where teams have been good at slowing #7 down. The Jacksonville Jaguars openly talked about confusing him and making him go through all his progressions. The Bengals are obviously a known defense, putting the odds in Ben’s favor, but still, they do a great job hiding what they’re running. And there’s no shortage of talent in the secondary.

– Cincinnati’s screen game is effective. They get their chunk plays from basically two sources. Deep balls to Green and the screen game, mostly through Gio Bernard. They hit a RB screen for a 61 yard TD against the Cleveland Browns to help win that one.

– The Bengals’ defensive ends give Pittsburgh fits. They have two good ones, a couple guys Steelers’ fans know well. Carlos Dunlap and Michael Johnson. Johnson is playing a little more inside this year but that might make things even more difficult. His length at 6’7 being able to get in throwing lanes. And Dunlap is a similarly built guy at LDE.

They’re disruptive in the passing game. But also the run game. And the Steelers will be without Marcus Gilbert, subbing in the smaller/less lengthy Chris Hubbard. And they’re a handful for any TE. Hard to block in the run game. Could end up asking B.J. Finney to do a lot of the heavy lifting to help out, though he isn’t as ideal as Hubbard. These are guys who can blow up the run game. Can’t let it happen.