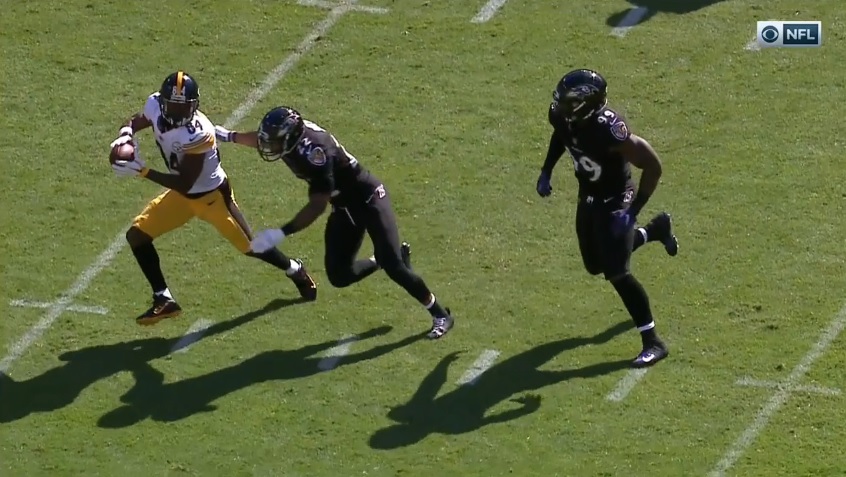 Sudden change is an area Mike Tomlin harps on. It’s right up there with being the more conditioned team, being the more physical one, and wearing cool sunglasses. And it’s an area the Pittsburgh Steelers’ defense has succeeded in this year.

The Steelers’ offense has turned the ball over three times this season. But the opponent has only scored three points off those turnovers, a Justin Tucker field goal following yesterday’s “interception,” a call that still seems like one of the worst of the season.

When Ben Roethlisberger was picked off in Week One, the Steelers forced a three and out and a punt. When Roethlisberger fumbled against the Chicago Bears, and the drive started at the 50, the Steelers held firm, forcing a long field goal that was missed. And then there was yesterday, the most improbable of turnovers where I’m guessing the entire Steelers’ bench assumed they were keeping the ball.

Then, in a moment, the Ravens had the ball inside the Steelers’ red zone. Their next three snaps? Incomplete. Incomplete. Sack. Followed by a field goal.

That’s as good as it gets.

Now, there was also the Eli Rogers muffed punt against the Bears that Chicago got a touchdown out of. That’s still sudden change. But even with that, ten points off turnovers in four games is a solid number and testament to the defense being ready at a moment’s notice. It’s helped prop up an obviously still underwhelming offense that hasn’t put up 30 points in the first month, something they last did in 2013.

It’s situational football Tomlin has emphasized in practice over recent years. Here’s what DeAngelo Williams told reporters back in 2015.

“That’s something that we practice all the time with Coach T. At any given point in practice, he’ll say, ‘sudden change.’ Offense runs out, defense runs out, we spot the ball there, and we go.”

It paid off then and continues to do so. Of the 23 offensive turnovers dating back to last year, the Steelers have allowed only five touchdowns on the ensuing drive. I don’t have data to compare that to the rest of the league but that figure seems strong. If it can continue when the defense takes on much tougher tasks starting in a few weeks, they’ll be competitive in every game the rest of the way.